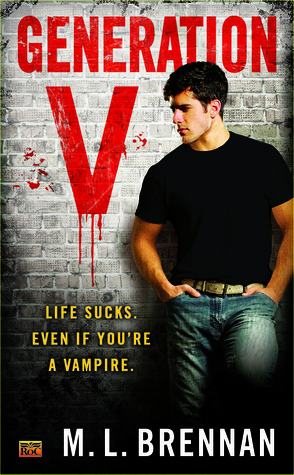 Fortitude Scott’s life is a mess. A degree in film theory has left him with zero marketable skills, his job revolves around pouring coffee, his roommate hasn’t paid rent in four months, and he’s also a vampire. Well, sort of. He’s still mostly human.

But when a new vampire comes into his family’s territory and young girls start going missing, Fort can’t ignore his heritage anymore. His mother and his older, stronger siblings think he’s crazy for wanting to get involved. So it’s up to Fort to take action, with the assistance of Suzume Hollis, a dangerous and sexy shape-shifter. Fort is determined to find a way to outsmart the deadly vamp, even if he isn’t quite sure how.

But without having matured into full vampirehood and with Suzume ready to split if things get too risky, Fort’s rescue mission might just kill him.…

320 pages (paperback)
Published on May 7, 2013
Published by Roc
Author’s webpage

You can purchase a copy of this book by clicking on the following links: Generation V

Every few weeks I complain about how I’m sick to death of vampires. I’m just sick of them. I’m sick of hearing about them, thinking about them, reading about them. I’m just done. Then, for some reason or another, I end up reading a vampire book. This leads me to believe that, despite all my bravado and gruff talk, I have some sort of a “thing” for vampires that I’d prefer not to admit to. Or something.

Then, occasionally, I run across a book dealing with vampires that doesn’t drive me crazy. It’s not full of mindless tropes and typical “mysterious sexy guy” plot lines. It’s a vampire book with flair. Though this is rare, when it happens, it tends to stick with me. I like these books. I like it when authors dare to do vampires different. I like it even more when these differences make vampires even more believable.

Generation V’s primary character is Fortitude Scott, with a pretty useless degree in film history. Fort himself is more human than vampire, and his rather tense relationship with his family makes him incredibly eager to hold onto as much of his humanity as he possibly can. Once readers are introduced to his (much) older sister and brother, they will likely sympathize with Fort’s desire to stay human and avoid transition.

What makes Generation V stand out from the myriad of other urban fantasy books that discuss the hardships of vampires stuck in a human world is the believability behind it all. Vampires aren’t really created in the sense that most think of, they are born and the process of being born is rather intricate. Brennan isn’t afraid to tell the readers how vampires are born/created and though it can be a little intricate and confusing, it’s a completely unique take on a very tired trope. It’s one of many of the small details that makes Generation V stand out from its urban fantasy peers.

As you’d expect, chaos erupts and Fort, instead of randomly finding himself in the middle of a rather mysterious situation, actually inserts himself into the middle of it despite the wishes of his family. Girls go missing in his mother’s territory, and while his family doesn’t seem to care, Fort is human enough to worry, wonder, and want to bring an end to it. At this point we are introduced to a rather attractive shape shifter. Sexy shape shifters aren’t new, and in an urban fantasy, you really have to expect some tropes. Where Brennan makes the “sexy shape shifter” a bit different is her Japanese lore and heritage that backs her.

Again I must say, it’s the details, background, history that make Generation V pop in a genre that is just exhausted.

While a lot of this novel is a mystery and there is some action thrown in for good measure, there’s also a lot of personal growth. Generation V is also a coming-of-age tale. Fortitude does have a tendency to whine quite a bit. Hey, it’s not my fault he chose to get a pointless degree, but it’s something I ended up reading about ad nauseum. That being said, Fort himself grows from a rather confused, disgruntled young man who really isn’t sure where he fits in the grand scheme of the world. By the end of the book, despite the fact that he still gripes a bit, he is much more confidant and seems like an adult who knows exactly who he is and what he plans to get out of life. It’s a great change to see, and it is a gradual evolution that happens as the plot unfolds.

There is a little bit of romantic tension in the plot, but it’s not overpowering. Instead, the plot is really more focused on the mystery of the disappearing women and Fortitude’s own personal growth and evolution. In my estimation, Brennan should be proud. The author has managed to take an urban fantasy book filled with vampires and shifters, two exhausted tropes, and made it interesting, human and relatable. Generation V isn’t your typical urban fantasy, and that’s what makes it so wonderful. It’s different, unique and fresh.