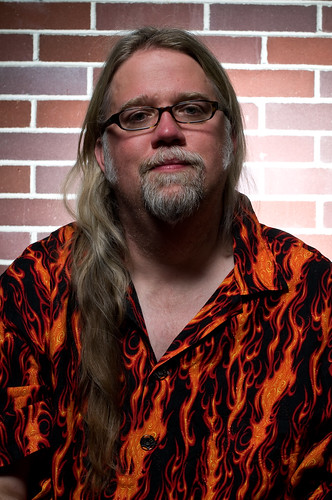 Jay Lake lives in Portland, Oregon, where he works on numerous writing and editing projects. His 2012/2013 books are Kalimpura from Tor Books, and Love in the Time of Metal and Flesh from Prime Books. His short fiction appears regularly in literary and genre markets worldwide. Jay is a past winner of the John W. Campbell Award for Best New Writer, and a multiple nominee for the Hugo and World Fantasy Awards. Jay can be reached through his blog at jlake.com.

My name is Jay Lake. I made my first professional sale eleven years ago, in 2001. My first small press novel was published in 2005. My first trade novel was published in 2007. In the last eleven years I’ve sold about 400 short stories, ten novels, five collections, and over a dozen anthologies edited or co-edited by me. I’ve won the John W, Campbell Award for Best New Writer, and been nominated multiple times or the World Fantasy and Hugo awards.

In other words, I’m a writer.

Four years ago, in April of 2008 on the day my first trade novel was released in mass market paperback, I became a cancer patient. I’ve spent the last forty-eight months living with stage IV colon cancer, through multiple metastases with repeated surgeries and chemotherapy. (For those interested in more on that story, the Sunday Oregonian recently interviewed me.)

Cancer is not a disability in the usual sense of that term. It’s not even really a chronic disease, like lupus or MS. Rather, it’s an acute disease which can recur on an overlapping basis until one is cured or killed. Some cancers, such as indolent forms of prostate cancer or lymphoma, can be lived with until one dies of other causes. Other cancers such as pancreatic cancer can move like wildfire, with a patient lifespan measured in weeks or months from diagnosis to death.

My cancer falls somewhere in the mid range between the two. And though I wouldn’t think to claim it as a disability in either the social or legal senses of that term, it has a lot in common with disabilities.

Cancer has affected my writing in two basic ways. First, the disruptions of treatment. Second, the shifts in my own thoughts and inner life as I respond to the distorting presence of the disease in my life.

The treatments are brutal. Surgeries are rough, but they’re fairly time constrained. I’ve had four, a major resection of my sigmoid colon, a minor resection of my left lung, and two major resections of my liver. In each case, I spent three to six days in the hospital, followed by several weeks at home in a fairly serious recovery mode. I was back to writing within a month every time. These days, when I contemplate future surgery (far more likely than not, given the odds of recurrence for my cancer cohort), I budget a month of time lost and all it good.

Chemotherapy, though, is a truly vile beast. Both courses I’ve undergone were six months of biweekly treatment. The first time, in 2010, we ran from January to June. The second time, in 2011, we ran two months in May and June, broke for surgery, then ran again from August to December. Where surgery disrupts my body and my calendar, chemotherapy disrupts my mind. My cognitive abilities are compromised, as are my emotional abilities. I know from experience that somewhere around the end of the second month of treatment I begin to lose my ability to write first drafts. By the end of the third, my ability to revise goes. Then I’m shut down until at least a month after the end of treatment.

In effect, it steals almost half a year from my writing.

This from someone who’s never been blocked for more than a weekend. Except by cancer.

My productivity is cut in half, in other words.

In a small scale sense, cancer has caused me to shift my expectations for daily and weekly writing, at least in those marginal times when I’m undergoing or recovering from treatment. I’ve also begun doing things like negotiating longer deadlines into my book contracts, as after three rounds of this, I know I can’t predict when I’ll fall ill again. It’s frustrating, as I’ve always been very time-efficient and deadline-oriented. But this is life with cancer.

Secondly, that shift in my thoughts and inner life has driven some changes in the way I view the themes of my fiction, and the characters I choose to dig into. I don’t write directly about cancer, at least not in my fiction, but time and mortality and the failings of life have become larger topics for me. I have lost a certain innocence that it seems strange to claim having as late as age 43, when the disease came upon me. But even now, at 47, I have yet to lose anyone close to me to death. Not a parent, nor a sibling, nor a loved one. I may well be the first of my immediate circle to die. It would be very strange to go to my grave having never known that kind of loss.

And it weighs on me. This disease levies costs on my parents. On my teen-aged daughter. On all those who know and love me.

All of this is a form of introspection, of course. One of the worst pieces of writing advice I ever got, well before my professional career ever started, is that writing is not therapy. I’d say precisely the opposite. The pain of life is one of the strongest drivers for gut-wrenching reality in characters and plot. In my case, some of my close friends have observed that my writing has grown stronger, though at the cost of a tuition I would never have willingly paid.

One of the biggest reasons cancer is not a disability is that I may yet be cured. You can’t walk away from crippling arthritis or cystic fibrosis or spinal bifuda. But I might be able to walk away from cancer. I have times, right now is one of them, where I have all my pre-cancer health and energy back. Waiting for the next tumor to arrive, surely as trees in the forest wait for lightning.  But this is ultimately a kill-or-cure disease, at least my form of it.

For now, I walk free and write freely. My next checkup is in August. I could lose another year of my life to surgery and chemotherapy, another six months of my writing. Or I could continue to journey under the open skies.

This changes me, and it will change me again and again before it claims me.

Jay Lake can be found on Twitter and his webpage. He has written a ton of books. If you want more details on any of his projects, I recommend his website, or hisgoodreads page.