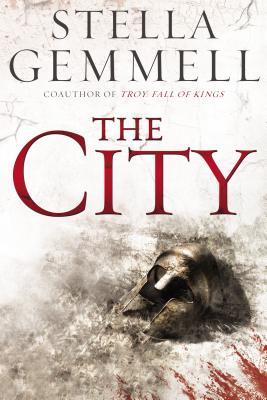 The City is ancient, layers upon layers. Once a thriving metropolis, it has sprawled beyond its bounds, inciting endless wars with neighboring tribes and creating a barren wasteland of what was once green and productive.

In the center of the City lives the emperor. Few have ever seen him, but those who have recall a man in his prime, though he should be very old. Some grimly speculate that he is no longer human, if he ever was. A small number have come to the desperate conclusion that the only way to stop the war is to end the emperor’s unnaturally long life.

From the mazelike sewers below the City, where the poor struggle to stay alive in the dark, to the blood-soaked fields of battle, where few heroes manage to endure the never-ending siege, the rebels pin their hopes on one man—Shuskara. The emperor’s former general, he was betrayed long ago and is believed to be dead. But, under different aliases, he has survived, forsaking his City and hiding from his immortal foe. Now the time has come for him to engage in one final battle to free the City from the creature who dwells at its heart, pulling the strings that keep the land drenched in gore.

You can buy a copy of this book by clicking on the following links: The City

Chances are, if you pick up The City by Stella Gemmell, you’ll be picking it up for one, if not two reasons. First, you will recognize the infamous Gemmell surname. Secondly, you’ll be in the mood for some serious epic fantasy. No matter which reason (if not both) you pick The City up for, you will be rewarded. The author does her infamous surname proud with her first foray into solo epic fantasy.

The City itself is sort of an odd duck. For example, there really isn’t that much time spent in the city itself. Readers won’t really get a feel for the life, sprawl and culture of the place like they might expect. A few street names are thrown out here and there, but that’s about it. The city itself remains somewhat of a mystery.

That being said, there’s a Steven Erikson type archeology that Gemmell really seems to focus on at the start of the book. As a huge Erikson fan, I absolutely loved how the city was more than the sum of its surface parts. Instead, it’s a place that has been built, crumbled and rebuilt over and over again. There are layers of the cities that came before that have sunk under the earth and people who live there, scavenging, never seeing the daylight.

However, after the first part of the book, not much is said about the layers under the surface. In fact, not much is said about the city itself at all. The book focuses quite a bit on the army moving around somewhere outside of the city and their various battles and captures. I never quite understood what they were fighting for, except the fact that the emperor told them to, but I got the fact that that’s how Gemmell wanted it to be. They were fighting because they had to. The reason why had been lost with time.

The sections of The City that actually took part in the city focused mainly on one of the emperor’s generals, Shuskara, who was condemned and thus, in hiding, and his adopted daughter Emly. There are a few secondary characters thrown in here and there, but these two take the main stage in the city itself. As a result, they are far more fleshed out than their secondary counterparts, who easily fade into the background and can, at times, be forgettable.

As for characterization in the army, Gemmell faces the same problem. There is a wide cast of characters, but the author seems to lose focus on all of them. Some characters fade into the background and become so forgettable that when they reappear, it is almost startling. Others are so central to the plot that they are almost mesmerizing in their realism.

The City’s plot is somewhat oddly paced. Some parts are incredibly fast paced and absorbing, and others felt like they dragged on and on. Gemmell had a lot of ground and history to cover in one large book, so I can understand how flashbacks and some infodumps are necessary, but her somewhat dry writing style made a few of these parts feel almost like a textbook, which sapped some of the fun from reading those sections and definitely made the plot slow down a bit.

Emly’s brother isn’t reintroduced until the end of the book. This isn’t really that aggravating, but he was so well developed at the start of the book that I found myself, throughout the course of the plot, wondering just what happened to him. When it was all said and done, I think Gemmell missed out on a captivating character and a really interesting plot thread that could have been added throughout the book and helped bolster some of the more textbook-ish parts.

The City has the sort of ending that is somewhat mysterious. It could either be a stand-alone, or enough is left open so Gemmell can explore the world a bit more. The book itself is certainly epic enough to be able to handle turning into a series, and I, for one, would love to see what happens to the city and characters as time passes.

While this book isn’t perfect, The City is delicately balanced. There’s archeology and a deep sense of history that will most likely appeal to Malazan fans. There’s plenty of action and characters you aren’t going to forget anytime soon. That being said, Gemmell didn’t have complete control over the pace of her plot, which lagged at points. Furthermore, some secondary characters had a tendency to be forgettable, at best. While The City is a rather dark book, it ends on a very subtle, but hopeful and happy note. When I really thought about it, I found that delicate, subtle and hopeful note throughout the book. Gemmell manages to balance the dark with light, and the history with plenty of surface level action. The City is sprawling in scope and an epic in every sense of the word, with a delicate touch that I found incredibly appealing.