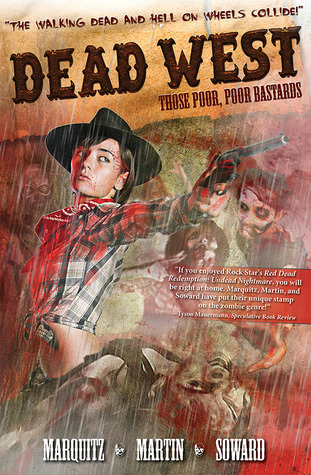 ‘THE WALKING DEAD AND HELL ON WHEELS COLLIDE!’

September, 1868…SOMEWHERE IN THE SIERRA NEVADA, during the expansion of the Central Pacific Railroad, Nina Weaver and her pa, Lincoln, trundle into Coburn Station with a wagonful of goods they’re looking to barter. Of all the rotten luck, their world—and the future of the American West—is forever changed when a sudden swarm of zombies invades town on the hunt for some human-sized vittles.

THOSE POOR, POOR BASTARDS is the first volume in the all-new Old Western Action-Horror series, “Dead West.” From the deranged minds of Tim Marquitz, J.M. Martin, and Kenny Soward.

This book was sent for my review by the author.

I hate zombies. I know that’s bad to admit, but I do. I don’t like reading about them, watching them on TV, hearing people talk about them. I just don’t care. A book full of zombies is almost sure to turn me off instantly. With that being said, why on earth did I decide to read Those Poor, Poor Bastards?  A few reasons: First, Tim Marquitz tends to do things differently with the books he writes, and I find that interesting. Second, I’m currently on a Weird West kick and this book most certainly takes place in the Weird West. Third, I was told it had a strong female lead, which pleases me. So the pros outweighed the gigantic zombie con and I decided to give it a try. Honestly? I’m glad I did. I enjoy challenging myself, and this one of those books where that challenge really pays off.

Marquitz told me that the authors intended this book to be like an action packed TV show that hit you hard and left you wanting more. Those Poor, Poor Bastards is a novella that clocked in on my computer in a .pdf file at 94 pages. I can read about 94 pages in an hour or two. Usually because I devour novellas so fast, they frustrate rather than please me. I like my books to last longer. That being said, Those Poor, Poor Bastards is so full of action and adventure that it feels like the book lasts a lot longer than it really does. The authors do a great job at gut-punching the reader almost instantly with a surprising amount of action, gore, and unique characters and their relationships. For the most part, it feels like more happens in this novel than there’s time for, which was surprising to me. The only area where I really did feel some of the shortness of the book was with character development. The problem in a short novel is that there just isn’t that much time to fully flesh out characters. Then again, characters aren’t well developed in the first series of a TV show, either. That’s not really the point. The point was to introduce readers to the world, the situation(s), present an overview of the characters, and make sure you care enough to come back for more. In this regard, the authors succeeded.

Nina is the most developed character, but I expected that. She’s the strong female lead with an interesting past and an even more interesting present. She’s half Native American (or Injun), and seems almost anti-hero in the fact that she often wants to act for herself more than for others, but she usually ends up helping others anyway. It’s an interesting dynamic to add to the book. Nina is a complex character who promises more complexities in the series to come. While Nina is the most fleshed out character, the others are just as believable, if not as well developed. Each character has their own unique traits which serves as a brilliant foundation for future character development and exploration.

After reading a few Marquitz books I knew he wasn’t afraid of gore and lots of action, but I’ve never read books by Martin or Soward so I wasn’t sure how all of that would blend together. I didn’t know if the authors would temper each other, or what. The truth is; if you are a rather squeamish reader who doesn’t enjoy lots of graphic details, you might want to skip over Those Poor, Poor Bastards. However, if you don’t mind the graphic details (very graphic details) and nearly nonstop action where graphic details are often used, then you’ll probably not mind this book. The authors really leave nothing out. They go into extreme detail regarding bodies decomposing, losing fluid and things of that nature. That being said, the reason this isn’t just another zombie novel (because I’d hate that) full of guts and gore is the character relationships.

While the characters haven’t had time to be fully fleshed out, their relationships are the focus of this book, and it’s their relationships that make you care about what is happening. In fact, while a lot of this book deals with zombies and battles, it seems like it’s actually a book about relationships with the zombie-gore-action as a nice (but obvious) prop to help tell the story the authors are really trying to tell. This was probably what made the book work for me. Most zombie novels and shows I’ve had the dishonor of watching (I’m sorry. I really do hate zombies on a very fundamental level for some reason) are written in such a way that the readers need to care about zombies first and the characters and their intricate relationships are a nice secondary prop to the zombie portion of things. Those Poor, Poor Bastards isn’t written like that at all, and that’s why I actually enjoyed it. The authors have really managed to side-step a huge issue that the zombie books/TV shows face by creating a book full of characters that, if not fully fleshed out yet, have the promise to be multi-dimensional in future books. Even if they aren’t fully fleshed out yet, their relationships are, and that’s what makes readers care. This isn’t just a zombie novel with interesting backup characters. This is a character driven, high-octane thrill ride, with zombies as an interesting backup. It’s set in a dynamic and interesting Weird West, which is just the cherry on top of the ice cream sundae. The future of this series holds so much promise. I’m incredibly excited to see what comes next.

And that’s something I never thought I’d say about a zombie novel.

Those Poor, Poor Bastards isn’t perfect, but what is? It’s a high-octane thrill ride full of blood and guts. The zombie factor might pull in a lot of readers, but this is more than your grandma’s zombie book. This is something new and different full of unique characters and fantastic adventures. Those Poor, Poor Bastards sets the stage for a wonderful series to come. It’s amazingly fun and an incredibly fast read that will sink its teeth into you and leave you wanting more, more, more. It’s a unique, invigorating spin on a subject I generally hate, but I was swept away by the wonderful setting and interesting characters. The authors put a new spin on a very tired and uninteresting literary trope. They took a gamble and it paid off. Those Poor, Poor Bastards is definitely one of those books you’ll want to read right away. It is sure to surprise you.