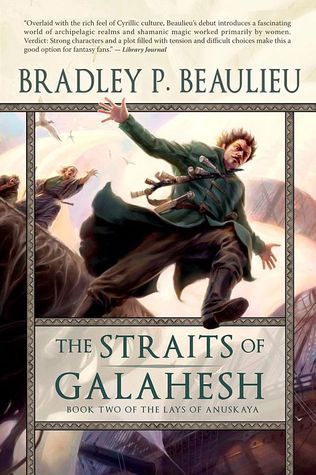 West of the Grand Duchy of Anuskaya lies the Empire of Yrstanla, the Motherland. The Empire has lived at peace with Anuskaya for generations, but with political turmoil brewing and the wasting disease still rampant, opportunists from the mainland have begun to set their sights on the Grand Duchy, seeking to expand their empire.

Five years have passed since Prince Nikandr, heir to the scepter of Khalakovo, was tasked with finding Nasim, the child prodigy behind a deadly summoning that led to a grand clash between the armies of man and elder elemental spirits. Today, that boy has grown into a young man driven to understand his past – and the darkness from which Nikandr awakened him. Nikandr’s lover, Atiana, has become a Matra, casting her spirit forth to explore, influence, and protect the Grand Duchy. But when the Al-Aqim, long thought lost to the past, return to the islands and threaten to bring about indaraqiram – a change that means certain destruction for both the Landed and the Landless – bitter enemies must become allies and stand against their horrific plans.

Can the Grand Duchy be saved? The answer lies hidden within the Straits of Galahesh.

When Beaulieu asked me if I’d be willing to read and review his series, Lays of Anuskaya, I jumped on it. My only reluctance was the fact that I read the first book (and reviewed it) a while ago, and since then I’ve forgotten many of the story details. It’s not Beaulieu’s fault I have a crappy memory, but it did make me nervous about starting off on book two. I was afraid of being a little too confused and missing many of the details I usually pay attention to when I read a book I’m going to review.

This is where my first bonus point for Beaulieu fits in. Instead of a prologue that takes way too long and sets the tone for the story but is largely useless (sorry, I’m not a prologue fan) Beaulieu, in his infinite wisdom, put a summary of the first book where the prologue would be. Not only did this refresh my forgetful brain, but it kept Beaulieu from having to drop in “reminders” throughout the book like so many authors do. There were no refresher paragraphs sprinkled throughout the prose, which was absolutely wonderful. If you just came from reading the first book, you could skip that section. If you are like me and it’s been a while, reading the first section will bring you up to speed and help you remember everything you might have forgotten.

The Straits of Galahesh takes off five years after The Winds of Khalakovo ended. Despite the gap, there is a rather seamless transition from book one to book two should please many readers. Furthermore, Beaulieu’s confidence as an author has grown between book one and book two and it’s obvious in his world building. Where many of the aspects of the world building and descriptions seemed slightly tentative before, now Beaulieu explores it all with confidence and vivid descriptions. Not only does the world expand quite a bit, but Beaulieu’s prose brings it to life for the reader. Other islands, cities, cultures and traditions are explored and it’s quite refreshing, it also makes The Straits of Galahesh feel more epic than The Winds of Khalakovo, which was something I welcomed.

Along with the expanded world are also some expanded conflicts. Beaulieu adds some political tensions between the islands and the Empire. The Straits of Galahesh follows three main characters, Nikandr, Atiana, and Nasim. While the trio stuck together for much of the first book, duty has thrust them apart in this second installment of the series. This actually ends up being a huge benefit for the reader as the three perspectives in three different areas helps readers understand multiple conflicts, side plots, perspectives and plot threads that Beaulieu weaves through the book. It also helps the reader understand the broader scope of the world that Beaulieu is dealing with.

Nikandr, Atiana, and Nasim all grow along with the world. They are each, for the most part, doing their own thing but the five year gap between books has required them to grow and mature the way a normal person would in five years. Beauleu handles their growth and development well, and keeps it going throughout the book. Some storylines might be more interesting than others for readers, but that’s going to be more of a personal preference thing than anything else. By and large, Beaulieu has succeeded in making his characters more engaging for readers in The Straits of Galahesh.

The Straits of Galahesh does take some time to build its momentum and engage readers, but the patience pays off. Once the book starts going, it moves quickly and is full of action and plenty of vivid adventure. Furthermore, since the three main perspectives are in different areas doing different things, the action and plot has a multi-hued feel to it that was really interesting. Beaulieu exercises his perspectives for maximum impact. Once the book gets going, it’ll be hard to pull yourself away from it.

Beaulieu switches perspectives every few chapters. The result of this is probably the cause for some of the rather slow burn start. The first half of the novel feels rather disjointed, more like short stories focusing on three different people rather than one uniform novel. However, Beaulieu pulls all of it together in the second half and nicely ties it off in a powerful ending.

I often talk about SBS (Second Book Syndrome) and in some respects The Straits of Galahesh suffers from it. Some aspects of the plot felt incredibly set up for the third book and lacked the natural flow of much of the rest of the novel. Occasionally Beaulieu tells and doesn’t show readers what is happening. These two factors working together can make readers feel like this second book is a bridge to hold books one and three together, rather than a book that can stand on its own merit independent of its series brethren. That being said, once readers reach the second half of the novel, things really get going. There’s plenty of action and suspense. The second half is where second book syndrome turns into more of a memory.

One thing that is mentioned over and over again in reviews of this series is how much of it is influenced by Russian and Middle Eastern cultures. This influence spreads into the names of characters, places and even the magic system. Beaulieu’s creativity should be noted here, as his magic system is rather complex. However, the magic system and the world both expand in this second book, and along with it, readers are given even more foreign names that often sound similar. This can be confusing, especially since many of these words are dropped into the book in a way that makes readers figure out what it means as they go. This might not be a big deal to many readers, and it’s something I expected when I started the book, but it can be mildly frustrating at times. In some ways this reminds me of the great epic fantasy authors like Erikson or Martin, who often throw readers into the deep end of the pool and let them figure out how to swim on their own. While some readers don’t mind that sort of thing, some do. It’s a personal preference issue more than a problem with writing or execution.

The Straits of Galahesh is a strong second book. Readers who enjoyed The Winds of Khalakovo will be sure to love this one. It isn’t perfect, but it’s a strong set up for what looks to be a promising finale to a unique, refreshing, and often surprising trilogy. Beaulieu’s expansion of his world, characters, conflicts and magic system pays off in a big way. This is a book full of surprising twists and turns resulting in a high impact novel that will have you hanging on for dear life by the time it’s ended. Regardless of whatever else I say, in the end I must tip my hat to Beaulieu’s unique vision and his nearly flawless execution of it. This is one series to pay attention to.