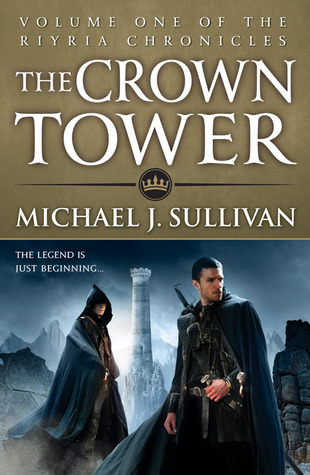 TWO MEN WHO HATE EACH OTHER. ONE IMPOSSIBLE MISSION. A LEGEND IN THE MAKING.

A warrior with nothing to fight for is paired with a thieving assassin with nothing to lose. Together they must steal a treasure that no one can reach. The Crown Tower is the impregnable remains of the grandest fortress ever built and home to the realm’s most valuable possessions. But it isn’t gold or jewels the old wizard is after, and this prize can only be obtained by the combined talents of two remarkable men. Now if Arcadias can just keep Hadrian and Royce from killing each other, they just might succeed.

The Riyria Revelations and The Riyria Chronicles are two separate, but related series, and you can start reading with either Theft of Swords(publication order) or The Crown Tower (chronological order).

I’m not a huge fan of spinoff series. In fact, I am so not a fan of them that I tend to avoid them like a plague. So even I was surprised when I ended up reading The Crown Tower by Michael J. Sullivan. However, I did read it, and I have to admit, I enjoyed it a hell of a lot more than I expected to (though to be fair, due to my lack of interest in spinoff series, I expected to hate this book. Sorry, I’m just being honest.)

That’s probably a good place for me to start my review. While The Crown Tower, and the book that follows it, The Rose and the Thorn, are both their own independent series, they feature all the characters readers grew to know and love in Riyria Revelations. These two books, however, are a prequel of sorts. Hadrian and Royce meet each other and start working together. Alongside them is the story of Gwen, the whore that frequents the Riyria Revelations books.

The banter between Royce and Hadrian takes some time to start up, which makes Gwen’s story the most powerful and interesting for the first half of the book or so, which is not what I expected. Once Hadrian and Royce meet up, their relationship stays rather brittle and cold until the adventures begin, which isn’t until past the halfway mark. This is, perhaps, where the biggest problem with the book lies. While fans of the Riyria Revelations series will be more than happy to stick out a rather slow start to read about how Hadrian and Royce come to be the infamous duo, people who are new to the series and the characters might have far less patience with that. It makes me wonder if this duology will appeal to new readers, or if it will mostly appeal to tried and true Sullivan fans.

That isn’t a bad thing, but it is something to be aware of. If I analyze this duology on its own, I’m not sure it can stand alone. I think it relies too heavily on Riyria Revelations to really entice new readers. Therefore, even though it is a prequel series, I would recommend you read Riyria Revelations first. That way, the “filling in the gaps” feel that The Crown Tower has will be far more entertaining.

In all fairness, that’s probably what I enjoyed about The Crown Tower the most. It does fill in a lot of gaps, which is why I wonder how much it will appeal to new readers. There were a lot of “ah ha!” moments where I realized that (insert character here) was the way he/she was in (insert Riyria Revelations book here) because of this event in The Crown Tower. That’s a lot of fun for me as a reader and it’s really an amazing accomplishment for Sullivan. He wrote a book that doesn’t really have a surprise ending but readers won’t really care. There are so many revelations and character building adventures that take place in this book that the predictability doesn’t matter. The Crown Tower is a fun adventure on its own, but for fans of Sullivan’s other series, it’s also an exercise in enlightenment. The Crown Tower adds a lot of depth and increases my understanding of his other series ten fold.

Anyway, back to Hadrian and Royce. Hadrian and Royce are both younger and a lot different than you know them to be in Riyria Revelations. Hadrian is almost unbelievably ignorant for a man who spent plenty of time in various armies and Royce is so shut down and turned off that he’s the darkness to Hadrian’s light. While they say opposites attract, Sullivan does a great job at showing just how opposite these individuals truly are, and how that can cause their personalities to clash in some pretty profound ways. That being said, once the action gets going, it’s interesting to see the grudging respect between the pair slowly form and turn into a new sort of relationship that neither of them have been privy to before. Sullivan really does a wonderful job at building up each character’s background, though Royce’s requires some infodumping as the man himself is incredibly closed off. It’s easy for readers to sympathize with both parties, and while Sullivan fans will know how the two men end up, he really keeps it interesting, with the right amount of tension and fun thrown in for good measure.

Gwen’s character was a big surprise to me, as she never really interested me much in the Riyria Revelations series. She’s an important person, but she’s more of an important background character in Sullivan’s other books. In The Crown Tower, Gwen really gets a life of her own. Sullivan spends a lot of time developing her background and the hardships of her life. In fact, he makes Gwen so here that she tends to steal the limelight at times. Furthermore, her role in The Crown Tower will make readers of Riyria Revelations really step back and appreciate her more due to their new understanding of who she is, and how she came to be that person.

I really need to tip my hat to Sullivan for managing to create an interesting spinoff series. That’s a hard task, and writing a prequel spinoff series must be even more difficult as Sullivan is kind of boxed in regarding the life and times of his characters. There had to be a lot of research done on his part to match up the small details in The Crown Tower with small, almost forgotten details in Riyria Revelations. That effort on Sullivan’s part really makes it shine. It’s those details that breath life into The Crown Tower, and will make it so incredibly engaging and interesting to Sullivan fans. Furthermore, fans already know how Hadrian, Royce and etc. end up, so Sullivan had to play to their expectations, but stay true to the tone of his popular Riyria Revelations series. Plus, he has to keep the story interesting and engaging. That’s a lot of pressure. He does all of that with finesse and grace. The Crown Tower is a swashbuckling adventure, but the depth and attention to detail really make it shine. This is sure to be a slam-dunk for Sullivan fans.