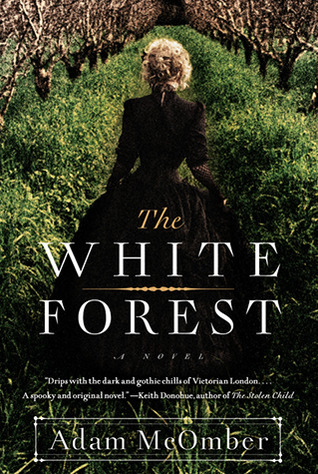 Young Jane Silverlake lives with her father in a crumbling family estate on the edge of Hampstead Heath. Jane has a secret—an unexplainable gift that allows her to see the souls of man-made objects—and this talent isolates her from the outside world. Her greatest joy is wandering the wild heath with her neighbors, Madeline and Nathan.

But as the friends come of age, their idyll is shattered by the feelings both girls develop for Nathan, and by Nathan’s interest in a cult led by Ariston Day, a charismatic mystic popular with London’s elite. Day encourages his followers to explore dream manipulation with the goal of discovering a strange hidden world, a place he calls the Empyrean.

A year later, Nathan has vanished, and the famed Inspector Vidocq arrives in London to untangle the events that led up to Nathan’s disappearance. As a sinister truth emerges, Jane realizes she must discover the origins of her talent, and use it to find Nathan herself, before it’s too late.

Disclaimer: The cover of the book I received is different than the cover displayed here. I’m assuming it’s because I have the paperback US release and all that’s on Goodreads is the original UK covers. I could be wrong, though. Anyway, when I’m less tired, I’ll track down a picture of my cover and fix this post accordingly.

When I was asked if I’d be willing to review The White Forest I jumped on it. It looked right up my alley – a weird, haunting, historical fantasy tale set in a realistic Victorian England. Yes, please.

The White Forest is, as I said, set in a Victorian England. However, instead of this time period seeming cheesy, as Victorian set books often do, McOmber infuses his Victorian era with an eerie, believable and dingy quality that really sinks into the readers bones. Before I say anything else about this book, I must make it absolutely clear that McOmber knows how to work his atmosphere for the story’s benefit. It is less of a setting and more of a powerful storytelling tool that he welds. The time and place almost become a character in their own right and before you realize it, you can feel the damp, dark and falling apart places in your bones. It’s quite a skill McOmber has to infuse his book with such vibrant and living atmosphere.

The White Forest starts out mundane enough, centering on a group of three friends, one of whom disappears. McOmber plays up the interesting dynamics of their friendship, like jealousy and the like, which really make their relationships seem less than genuine. That’s the first real point where McOmber strays from the typical. The rift in the friendship is rather subtle, but that subtlety allows an impressive amount of tension to build up. One thing feeds another, and with an already vibrant and impressive atmosphere, the book quickly turns from a mundane Victorian story to something completely different without readers really even realizing it. Quickly the novel moves into dark fantasy territory, and so subtly the reader probably won’t realize it happening.

The truth is, this is a pretty slow moving novel. There are a lot of points at the start where Jane is remembering various aspects of her life leading up to the point of Nathan’s disappearance and her understanding of her unique abilities. These reflections are necessary for the text, but it keeps things slow moving. Honestly, with a Victorian era book, I expect slow moving. Thankfully, McOmber fills the novel with enough mystery and interest points to keep readers going despite the occasionally plodding pace. For example, the slow pace allows readers to really get to know the characters, and not just by their actions and thoughts, but also because each character is so incredibly deeply flawed. Jane herself is guilty of treating some people like absolute dirt and enjoying it. Nathan is so obsessed with his research; you can’t help but wonder just where he was going with it all, and where he went.

Jane is a fascinating character. Her understanding of her abilities and the White Forest and all it means is slowly revealed as the book progresses. She’s incredibly flawed, as I mentioned above. The slow revelations and the various points of understanding the reader will face in regards to Jane is enough to keep them going through the slow parts. Jane’s abilities are interesting, as are their impact on the events that transpire. Nathan’s own disappearance is rather fascinating as well, as are the details involving the cult that he was involved in. Life slowly unfolds around the three friends and their interesting friendship dynamics have a light shined on them. Their friendship has a fingernails on a chalkboard feel to it because it’s so incredibly… odd. These are all things that the reader will pick up on that otherwise might have been missed if the plot had been fast moving and full of action. So yes, the plot has a rather plodding feel to it, but that plodding feel ends up being a benefit to the story as a whole.

As I said above, each aspect of the novel seems to feed other aspects of it. The intense and dark atmosphere are a wonderful foundation on which McOmber adds a powerfully dysfunctional friendship, deeply flawed characters, and the obvious mystery of what happened to Nathan. That being said, if you haven’t already been able to tell, the atmosphere and various character and relationship dynamics interested me more than Nathan’s disappearance. While his part of the story is, obviously, interesting, it’s these more subtle qualities that McOmber touches on that are truly captivating and it’s those subtle qualities that will impress the reader more than anything else. It’s absolutely interesting to see how the author can manage to infuse such an almost standard tale with so many dark, intense and atmospheric qualities. McOmber is a master of manipulation.

The White Forest is a unique novel. It works on many different levels. It’s slow moving and subtle, so readers looking for in-your-face and fast paced will probably be disappointed. McOmber creates a dynamic atmosphere that infuses the reader with an undeniable sense of place and time. Coupled with deeply flawed characters and almost unnatural relationships, this novel might appear to be a Jane Austin-esque on the surface, but it crosses the line into gothic fantasy easily and willingly without the reader ever really realizing its happening. Finished off with McOmber’s smooth, flowing and absorbing prose, this is one of those books that will appeal to readers looking for something completely different, very atmospheric, and incredibly subtle.