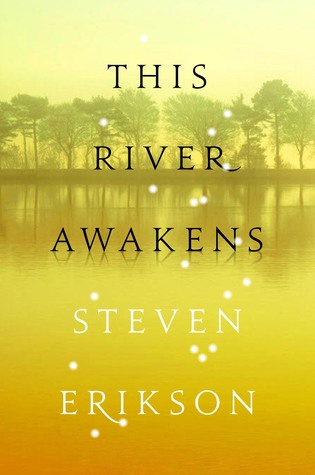 Owen’s family moves from the city to the countryside, and the adolescent Owen quickly develops friendships and rivalries. When he discovers a corpse in the river, it proves the catalyst for a spiralling descent into the darker reaches of the community, and a stark rites of passage for Owen.

Pretty much all you have to do is say Steven Erikson and I’m there. This River Awakens is far different from anything most people will think of when they hear the author’s name. It’s not set in a secondary world. It’s not epic fantasy. There isn’t a huge war or expanding empire in the core of the book. From what I understand, This River Awakens is Erikson’s first book and it’s more fiction and urban fantasy than anything else. While it is far different than typical Erikson, it is still absolutely glorious.

This River Awakens is being re-released after being published in 1998 under Erikson’s name of Steve Lundin. It’s a completely different tone from anything I’ve ever read from Erikson before. As I mentioned in yesterday’s review, I love reading author’s works that are totally different from what I typically associate with them. I love seeing just what an author is capable of producing, and their offbeat books tend to show that so much better than the books they write to their already established fans. This River Awakens is so absolutely different than Erikson’s epic fantasy books, but you can still see him in these pages. His writing is solid, flowing, lyrical and incredibly atmospheric. His world building is nothing short of stunning and his characters are deliciously complex. This is true Erikson. It’s so different from anything I even imagined him reading, that it’s pure candy for me.

This River Awakens tells the story of young Owen (12), who is moved to the countryside with his family. Owen is younger, which makes this book, for the most part, a rich and emotional coming of age tale. Owen makes friends and enemies, like any kid does. He has good times and bad times. Parts of his life is great and other parts suck. He’s just a confused kid trying to make it through those pukey years we all remember so fondly. Despite the fact that this is Erikson’s first book, the characterization is reminiscent of the author’s epic fantasy. Owen is painstakingly developed. He’s well rounded, incredibly complex, and raw which makes him absolutely engaging and believable. He isn’t just a character you read about, you will become Owen, which just makes the book even more engaging and enjoyable. Erikson doesn’t shy away from the dark and light parts of his characters, even his younger ones. This might make some readers uncomfortable, but his ability to shine a light on the complexities, dark, and light qualities of the human psyche is fantastic. Furthermore, the excellent characterization doesn’t stop with Owen. Erikson spent plenty of time developing the supporting cast as well.

There is a haunting quality to the area where Erikson sets his book. It takes place in rural Canada, which could easily be rural anywhere. However, there’s something quite eerie about the location. Once Owen and his friends find the body of a very large man floating down a river, the location seems to take on a life of its own and the fantasy element are truly inserted into the tale. The fantasy works well with the location and atmosphere to create something entirely new and very believable within the context of the book. This is one of those rare books where the world becomes as much of a character as the people who pepper the novel. Erikson’s stunning writing infuses This River Awakens with intense atmosphere. This makes the events that transpire seem so real, and will help the readers feel incredibly emotionally engaged in the characters. This also makes the struggle between light and dark, childhood innocence and adult reality so absorbing.

This River Awakens is shockingly dark and even, at times, rather ugly. This could easily be “too much” to some readers, s be warned. In fact, a lot of what happens in this book can be stomach churning. I can tolerate a lot of dark. Lots of dark. Tons of it, but this book did disturb me at times, and that fact alone shocked me. It also says something huge for the realism of Erikson’s writing. For example, a girl is raped by her father, a woman is battered by her drunk husband, kids find the rotting body of a giant and more. This is an incredibly dark, very disturbing book and readers should be aware of that. Yes, its coming of age, and yes, there is some light but it doesn’t balance the darkness and Erikson’s incredible writing and intense atmosphere can make the darkness seem so much more dark.

This River Awakens also has a slightly bloated feel. The plot is so slow moving at times it feels like you are stuck in cement. The writing, the Erikson feel, the rich characters don’t make up for this. While readers who stick through the book will be richly rewarded, it is a ponderous tome. If Erikson had cut the length a bit, and perhaps moved the plot forward faster, the book might be easier for readers to enjoy and the dark aspects of it might be a bit more tolerable. That being said, it really says something for the author and first book that readers can and do manage to read the entire book despite the ugly bits and ponderous pace. This is a deeply disturbing, very slow novel (and the slow pace might make the disturbing bits seem all that much more disturbing), but it’s still engaging, absorbing, and beautiful in its own way.

This River Awakens is incredible. It’s incredibly disturbing, incredibly dark, incredibly atmospheric, and incredibly beautiful. It’s a raw, visceral coming-of-age story and absolutely unlike anything I’ve ever imagined the author could, or would, write. It’s a haunting tale that will stick to you like glue once you finish it, though you might have to work a bit for that finish. It’s worth it (squeamish readers beware). This River Awakens has its share of problems, and it’s definitely not for everyone, but despite its issues, it is fantastic. It shows just how versatile Erikson is as an author. Ponderous pace be damned, this book is pure art – beautifully dark, very challenging (in more ways than one) art.