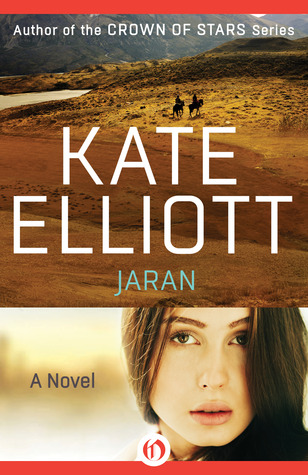 The first book of Kate Elliott’s epic Novels of the Jaran, set in an alien-controlled galaxy where a young woman seeks to find her own life and love, but is tied to her brother’s revolutionary fate

In the future, Earth is just one of the planets ruled by the vast Chapalii empire. The volatility of these alien overlords is something with which Tess Soerensen is all too familiar. Her brother, Charles, rebelled against them at one time and was rewarded by being elevated into their interstellar system—yet there is reason to believe they murdered his and Tess’s parents.

Struggling to find her place in the world and still mending a broken heart, Tess sneaks aboard a shuttle bound for Rhui, one of her brother’s planets. On the ground, she joins up with the native jaran people, becoming immersed in their nomadic society and customs while also attempting to get to the bottom of a smuggling scheme she encountered on her journey there. As she grows ever closer to the charismatic jaran ruler, Ilya—who is inflamed by an urgent mission of his own—Tess must choose between her feelings for him and her loyalty to her brother.

Jaran is the first volume of the Novels of the Jaran, which continues with An Earthly Crown, His Conquering Sword, and The Law of Becoming.

(Note: This review was written while I was incredibly tired and unable to edit it properly. I will edit it once I am fully rested and awake. Until then, enjoy all my glorious typos.)

When I think of Kate Elliott, I think of fantasy (or steampunk). I do not think of SciFi. Therefore, when I saw that she wrote a SciFi book, I knew I had to read it. I’m always fascinated with authors who take a detour from their typical style to try out something new. Sometimes it works, sometimes it doesn’t, but it’s always fun for me to see what an author is capable of once they leave their literary comfort zones.

Kate Elliott is best known as an epic fantasy writer. Her books are powerful, and sprawling. Her characters are well developed and emotionally intense. Her writing pulls it all together so perfectly. She’s an author that, no matter what flaws I might find with her books, I always tend to enjoy them to one extent or another. Jaran really is no different. It’s not a perfect novel, but it’s mighty enjoyable, despite that.

Jaran is billed as a SciFi, but it’s really an epic fantasy book with hints of SciFi thrown in to make things interesting. Jaran starts with Tess in a futuristic galaxy and she ends up on a very behind-the-technological-times planet. She’s highly placed in the governmental order of things, as her brother is an important Duke who has been fighting for human rights against the alien Chapalii. Tess stands to inherit all of that, but her discomfort with the position and her overwhelming feeling that she is a poor fit for the job drives her off to find her own way and maybe discover who she is as she goes.

In truth, Jaran is as much a coming of age novel as anything else. While Tess is an adult, she is rather emotionally broken having come from a defunct engagement, and she’s rather naive despite all of her education. In many ways, Jaran reminds me a bit of Pride and Prejudice. The protagonist is a well-educated woman who is caged by the expectations of society and the need of her family. As the book progresses, Tess grows and develops becoming her own woman as she is forced to live with the locals and experience a wider version of life. The similarities don’t end there. Jaran isn’t an incredibly unique novel, and it can be quite predictable, but Elliott manages to keep it interesting despite that.

I can’t really discuss Jaran without discussing the romance. Like Pride and Prejudice, this is a coming of age story (as I just discussed) but it’s also a love story. Most of the book is spent with Tess circling her love interest and both of them coming to terms with their feelings for each other and what that means, as their backgrounds are so vastly different. This also puts her in the center of a simmering war between two mighty cultures, the people who live in villages verses the people who live on the plains.

Typically I don’t enjoy romance, but Kate Elliott has a way with spinning a story that managed to pull me in despite my anti-romance sentiments. While the romance is a huge part of the plot, there’s also a fair amount of discovery and world building that takes place. The world where Tess finds herself is replete with political tensions which add tension throughout the book. The world building is well done. Elliott manages to make the plains and the culture feel vivid and real. The well thought out culture of the plains people fits their habitat perfectly.

That being said, while Jaran is incredibly readable and engaging, nothing is perfect. The action scenes tend to have convenient resolutions, which makes them less than believable. This also has an additional backlash of making certain characters seem a little too badass to be real. The romance is well done, but there comes a point where the tension between various characters feels overdone and needlessly prolonged. The budding relationship, while sweet, can overpower the plot and world building. Furthermore, occasionally the point of view switches to Tess’s brother’s assistant. Those sections are actually rather boring and they left me chomping at the bit to get back to Tess. They have a very speed-bumpish feel to them that could be frustrating.

I never expected to say this about a book so heavily focused on romance, but Jaran truly is a truly charming tale. It’s less SciFi than fantasy, but Elliott shows her skills with deft world building, and intensely emotional characters that are mostly well developed. It’s easy to become attached to her cast. When Tess loses a loved one toward the end of the book, the reader feels it acutely, and that’s saying something impressive for Elliott. Plus, there is enough information dropped about the wider universe, that I’m sure Elliott will expand the world and its complexities in future books. Elliott not only writes a sweet story, but she writes an absorbing one. Despite its flaws, Jaran is a book that, while it might not please everyone, it’s sure to find a soft spot in many.