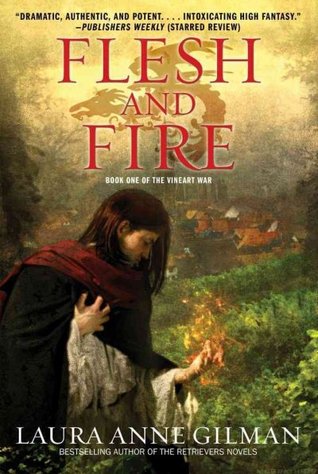 Once, all power in the Vin Lands was held by the prince-mages, who alone could craft spellwines, and selfishly used them to increase their own wealth and influence. But their abuse of power caused a demigod to break the Vine, shattering the power of the mages. Now, fourteen centuries later, it is the humble Vinearts who hold the secret of crafting spells from wines, the source of magic, and they are prohibited from holding power.

But now rumors come of a new darkness rising in the vineyards. Strange, terrifying creatures, sudden plagues, and mysterious disappearances threaten the land. Only one Vineart senses the danger, and he has only one weapon to use against it: a young slave. His name is Jerzy, and his origins are unknown, even to him. Yet his uncanny sense of the Vinearts’ craft offers a hint of greater magics within  magics that his Master, the Vineart Malech, must cultivate and grow. But time is running out. If Malech cannot teach his new apprentice the secrets of the spellwines, and if Jerzy cannot master his own untapped powers, the Vin Lands shall surely be destroyed.

In Flesh and Fire, first in a spellbinding new trilogy, Laura Anne Gilman conjures a story as powerful as magic itself, as intoxicating as the finest of wines, and as timeless as the greatest legends ever told.

A while ago I asked people to offer up books with unique magic systems. Flesh and Fire was one book that was mentioned several times, as the magic system is based on wine. Of course I had to give it a try. Flesh and Fire also happened to be the first book I’ve read by Laura Anne Gilman.

Flesh and Fire is the first book in the Vineart War trilogy, and it was nominated for the Nebula award in 2009. It’s easy to see why. Gilman has a way with her writing. It’s smooth and lyrical. She takes a complex magic system which could easily boggle the non-wine-guru’s mind and boils it down to easy to understand, simple parts. Not only does she make it understandable, but her lyrical, flowing prose suck the reader in almost before they realize it. Her world comes to life under her ministrations, and the details are so finely wrought that you can picture the vine-covered hills, and smell the loom, and feel the magic in the fruit. When Jerzy starts to work with the wine and learn the craft, you can feel his sore muscles and you sympathize with his desire to learn, as well as his frustration with grasping difficult concepts. It’s actually quite amazing how Gilman can take such a vast, complex world and magic system and make them so incredibly understandable to readers who are both wine aficionados and those who aren’t.

Flesh and Fire is essentially Jerzy’s story, though other perspectives are woven in. Despite the fact that the other viewpoints are fairly minor, they do serve to give the world and the situations that are unfolding context. They also give the world color and help define the sprawling landscape that Gilman has created. Gilman created an epic fantasy with a sprawling world and unique magic system, and also managed to create a few key characters that help define the landscape, politics and magic system. That being said, this is the first book in an epic fantasy trilogy, and while plenty happens, it does have a distinctly “first book” feel. What I mean by this is, Flesh and Fire feels like more of a buildup than an actual, self-contained book. There is a lot of world building taking form of the complex magic system, political tensions, religious development, and more. Gilman uses her caste to mostly make sure that the reader understands her creation, while the plot is almost secondary.

Normally that might be a point of contention for me, and it might be for some readers because all of the building does make the plot feel very slow. However, in the case of Flesh and Fire, with such a vast world, complex politics, and a magic system that is truly one-of-a-kind, I needed one book of building or I wouldn’t be able to completely understand or enjoy the plot in the other books of the trilogy. As I mentioned before, that might not be the case with everyone, and I’m sure there will be plenty of people who’d rather have a plot and fill in the building gaps themselves, but for others like me, one book of development before the plot takes off might be exactly what the doctor ordered. Though it should be noted that the wine based magic system might take some time for people to understand, and thus the book might take some time to really get into. The effort pays off ten-fold.

One unique quality of Flesh and Fire is how it’s not constricted to one class of people. So many epic fantasy books almost completely comprise the ruling class, or the slums, but rarely do epic fantasy books tango in both pools. Jerzy starts out as a slave, and in an almost Carol Berg sort of way, his slavery becomes an important catalyst to his change of fate. Regardless of the fact that he is only a slave for a short time in the book, his time spent in slavery is a huge force that shapes his personality and mannerisms. Though he moves up the social ladder, slavery is always there. However, Gilman makes slavery, a despicable practice at the best of times, interestingly meaningful to her magic system. Though she never glorifies it, it’s interesting how the Vinearts almost become antiheroes with their slavery practice and the reasons behind why they do it.

Jerzy starts out fairly young and while readers of Flesh and Fire will watch him grow and evolve as events transpire, there is really an air of “The Chosen One” about him, despite the fact that he really isn’t chosen, he just happens to be in the right spot at the right time and interesting things happen. The reason he feels “chosen” is probably because of his rise from slavery into something more and how important he becomes in the events that unfold around him. That’s not a bad thing, mind you, but readers should be aware that the feel is in this book. That feel might cause some readers to feel like Flesh and Fire is a touch clichéd with characterization, though in my humble opinion, if that feel is there, it’s incredibly minor.

Master Malech plays a key role in Jerzy’s discovery, as well as the world building, and Jerzy (and the reader’s) magic system education. He’s an interesting character, probably the most interesting to me because Gilman purposefully creates him as a rather shadowy figure who has a distinct anti-hero feel to him. He’s a mystery. He is out for his own benefit and has no qualms about it. You never really get to know him, but he’s developed in such a way that the reader can’t help but wonder about him and his mysterious past. He not only plays a key role in Jerzy’s development and the reader’s education, but he often drops hints about the land he was from (which is very far away) and unique foods, as well as other small hints. These hints actually end up being an incredibly powerful world building tool for Gilman. Through Malech she creates a sprawling world full of intricate details that really make the landscape and cultural nuances pop with minimal infodumps.

As I mentioned above, much of this book is world building. And much of that world building happens through Malech and Jerzy. Readers will sit in with Jerzy through his many lessons. This might feel info-dumpy to some readers, but Gilman handles it with finesse and the education never felt oppressive or slow, probably because the world is so complex and fascinating. A combination of Gilman’s powerful, lyrical writing and the unique world she creates makes any infodumps bearable. Honestly, when I think about it, I’m truly not sure if there was any better way Gilman could have done it and I think she deserves kudos for making such a huge world so interesting, despite the fact that the first book is mostly spent building and developing it. I never thought I’d enjoy a book so heavily steeped in world building so damn interesting and entertaining.

I’m using the word “unique” a lot in this review, but I’m not sure what other word would fit as well as that one. “Unique” summarizes Flesh and Fire perfectly. Everything about it is enchantingly different. Flesh and Fire is a “must read” book for anyone interested in memorable magic systems, coupled with an intricate, nuanced, and detailed world. Gilman is a shining example of how the foundation book of a series can be well done and fascinating. Flesh and Fire is absorbing, and Gilman’s smooth prose serves to hook the reader before they even realize they are hooked. The best quality of this book, however, is the fact that Gilman manages to enchant the reader. Flesh and Fire is epic, interesting, and most importantly, magical. I will never look at wine the same again.