NOTE: This is a review of a full trilogy, so I did not add book synopses and yes, this may contain some minor spoilers. 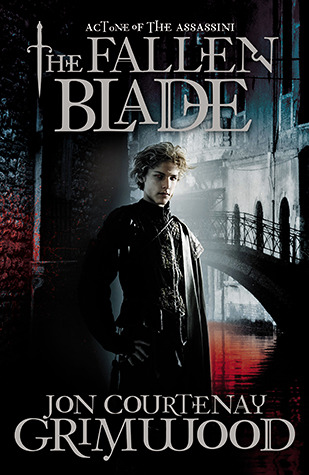 I don’t generally like to review an entire series at once, but sometimes it must be done. I recently read The Assassini trilogy by Jon Courtenay Grimwood. I read each book so quickly I decided to forego reviewing each book independently and just review the trilogy as a whole.

The Assassini trilogy starts with The Fallen Blade where readers are introduced to the major players of the series. While most of the character operate independently of each other, about halfway through the book it becomes clear how everyone will be entangled. Grimwood uses The Fallen Blade to create a believable, vivid alternative 15th century Venice that will undoubtedly enchant, as well as educate readers.

Unfortunately, The Fallen Blade suffers despite its interesting premise. There is so much thrown at readers at the start of the book that the narrative seems incredibly chaotic and hard to keep track of. Instead of introducing all of the supernatural elements (vampires, witches, werewolves), and political problems (two regents that hate each other and a simple duke, complete with a cousin who needs to be conveniently married off), and a few understated but very present social issues (poverty, violence, gangs, etc), Grimwood introduces all of this in the first hundred pages. It is almost overwhelming. Then, after that, the book evens out a bit. The plot finds its pace, and all the overwhelming aspects from the start find their comfortable positions. Yes, the start of the novel is chaotic, but the middle feels natural. The ending is back to being chaotic, rushed, and bit too convenient. Basically, this book has some significant pacing issues.

Grimwood gets a tip of the hat for taking some fairly typical fantasy tropes and putting his own unique spin on them. However, there are some fairly stereotypical elements here. There’s a band of assassins, which has long since ceased being unique. There’s romantic tension. There’s the sexy mysterious guy, and the two regents seemed a little too cookie-cutter thoughout the series, each falling comfortably in their roles – one being incredibly wise and all-seeing, and the other being too easy to hate. Despite how chaotic and tropey The Fallen Blade can be, it was never boring and does a great job setting up the rest of the series.

Where The Fallen Blade was equal parts entertainment and frustration, The Outcast Blade is where Grimwood really shows 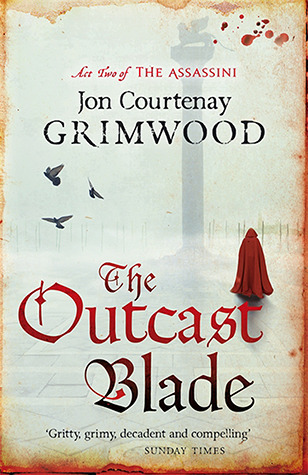 his capabilities. Gone are the chaotic elements from the first book. Having established his world, culture, and primary players, Grimwood focuses mostly on plot.

The world has been established, but one of the most entertaining bits of this entire series is that Grimwood never really stops expanding upon it. In fact, in The Outcast Blade, Venice becomes a character in and of itself.  I love reading books where I learn things at the same time. Many people romanticize this period of history, but Grimwood shows it in all its unfair, grimy, disease ridden, violent glory and it is shockingly realistic. Yes, I read this series as much for the addictive world as for anything else.

The Outcast Blade has its own plot, but after the first book it felt kind of hum-ho. There is more political wrangling, plenty of betrayal, some emotional upheaval, romantic tension, and a new interesting character added to the mix. It ends with another battle that I found to be rather predictable.

The problem isn’t that the plot isn’t interesting, because it is. This book moves at a rip roaring pace, and without all the attention on establishing a unique alternative-history world, Grimwood really focuses on the plot and it’s a lot tighter, easier to understand and appreciate due to that. However, The Outcast Blade, at its heart, felt much like The Fallen Blade. I found it to be a touch too predictable for my liking. It felt more like a fun romp rather than the thought provoking read I wanted and expected.

That being said, The Outcast Blade was a much better read than The Fallen Blade. The characters are more realistic. Their emotional journeys were more believable and thus, sympathetic. My one character issue was that the two regents fell more into their cookie-cutter roles, which was frustrating. The first part of the book felt largely like a setup while the second part was really where most of the action and excitement takes place. Don’t worry, the buildup and time spent is well worth it.

The Outcast Blade was a solid second installment in an incredibly enjoyable series. While it didn’t live up to my expectations, it was well worth reading. 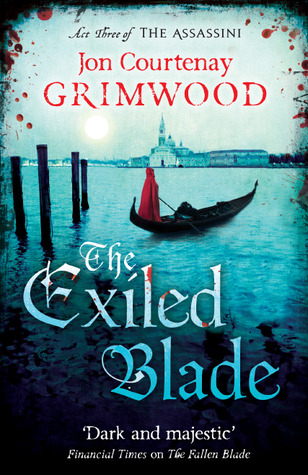 The Exiled Blade was, in my opinion, the best book of the series. Here the book is almost divided in half between time spent inside and outside of Venice. While I did lament the loss of the city that Grimwood had created, it was necessary, as most of this book focuses on internal battles between Tycho and Guilietta rather than external battles between Venice and (insert army here).

I found it incredibly refreshing to see how Grimwood had developed these characters throughout the series, and then decided to take such a personal, introspective journey with them. Grimwood handles them with care, and their activities, thoughts, and evolution reflect everything they had gone through throughout the book.

Because most of the true story seems to take place on a personal, internal level, there isn’t a ton of outward action and epic battles to speak of (though there is plenty). Each character has to face their own demons and become the person they were trying to become. Some of the relationships that form can feel a bit contrived, and some of the things that happen suffer from convenience syndrome, but those issues are largely easy to ignore.

After the finale of book two, readers might wonder where exactly Grimwood could possibly go with the series. Don’t worry; he quickly turns the perfect ending on its head. The twist will keep readers on the edge of their set. While the tone of The Exiled Blade is a touch different than the tone of the last books, it is probably the most haunting and memorable of the set.

The trilogy ends on a somewhat surprising, bittersweet, but perfect note. It’s a grand payoff for all your time spent with the characters. Despite the flaws of this trilogy, I felt like I was losing friends when it ended. This is the perfect series for people interested in something different, historical, character driven, bloody, and romantic.