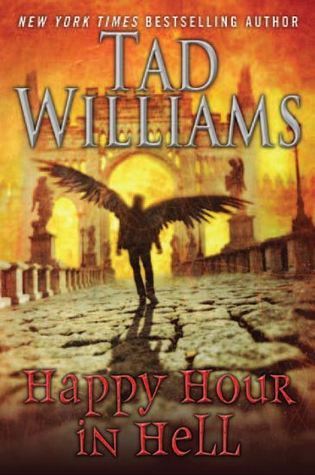 I’ve been told to go to Hell more times than I can count. But this time I’m actually going.

My name’s Bobby Dollar, sometimes known as Doloriel, and of course, Hell isn’t a great place for someone like me – I’m an angel. They don’t like my kind down there, not even the slightly fallen variety. But they have my girlfriend, who happens to be a beautiful demon named Casimira, Countess of Cold Hands. Why does an angel have a demon girlfriend? Well, certainly not because it helps my career.

She’s being held hostage by one of the nastiest, most powerful demons in all of the netherworld – Eligor, Grand Duke of Hell. He already hates me, and he’d like nothing better than to get his hands on me and rip my immortal soul right out of my borrowed but oh-so-mortal body.

But wait, it gets better! Not only do I have to sneak into Hell, make my way across thousands of miles of terror and suffering to reach Pandemonium, capital of the fiery depths, but then I have to steal Caz right out from under Eligor’s burning eyes and smuggle her out again, past demon soldiers, hellhounds, and all the murderous creatures imprisoned there for eternity. And even if I somehow manage to escape Hell, I’m also being stalked by an undead psychopath named Smyler who’s been following me for weeks. Oh, and did I mention that he can’t be killed?

So if I somehow survive Hell, elude the Grand Duke and all his hideous minions and make it back to the real world, I’ll still be the most hunted soul in Creation. But at least I’ll have Caz. Gotta have something to look forward to, right?

So just pour me that damn drink, will you? I’ve got somewhere to go.

What on earth can I say about the man, or his books, that hasn’t already been said? Happy Hour in Hell is the second novel in the Bobby Dollar series. While readers might enjoy and appreciate the book more if they read The Dirty Streets of Heaven first, this is one of those delicious books that can be understood and enjoyed on its own merit, too.

Happy Hour in Hell starts on a rather dark, lonely note with Bobby Dollar crossing the bridge to enter Hell. This pretty much sets the tone for the whole novel. Happy Hour in Hell is darker than its predecessor, and explores the afterlife and death in a very Dante’s Inferno sort of way. Things are wacky, weird, and definitely doomed. Readers will be introduced to plenty of new characters and creatures, each of which has a bite and an edge.

The truth is, Happy Hour in Hell really feels like Tad has let his imagination go. He really visualizes hell, and all of the nuances of hell, and throws it at the reader, and Bobby has to navigate all of this. This creates a lot of plot twists and edge-of-the-seat moments for readers. However, where The Dirty Streets of Heaven read more like a romp-and-roll adventure novel, Happy Hour in Hell really calls more to Williams’ fantasy roots. There’s a journey, an almost impossible goal the protagonist is working toward, and plenty of twists, turns, and battles between the start and the last.

Like a good fantasy novel, Hell has its own form of dictatorship (which sort of perversely mirrors some of Earth’s own elements), and Dollar has pissed off one of the Grand Dukes, which ups the tension and the danger-element. Add the Hell location to the mix, and you’ll probably realize pretty soon that Williams’ vivid imagination mixed with such a dark scene is addictive, but probably different than you’d expect if you’ve read The Dirty Streets of Heaven. Hell is a real place, and the people and demons that inhabit it are just as evil as you’d expect, and twice as real as you anticipate with Williams’ skill.

In the midst of all the adventure, the serial killer mystery, the wondering how Bobby is going to get out of the mess he’s in, are more profound, subtle questions that Williams is asking the reader. Being a book with somewhat religious themes (Heaven, Hell, angels, demons, eternal punishments and rewards), deeper themes comes with the territory, though these deeper notes don’t hit the reader on the head. In fact, they are pretty easy to overlook if you aren’t looking for them.

There’s enough surface action and adventure going on to keep anyone entertained. If, however, you are like me and you enjoy looking for the deeper themes in your books, you’ll find that Happy Hour in Hell plays a lot with the eternal punishments and rewards, and in a pretty intimate, emotional way. On a more obvious level, Tad forces readers to wonder just how far you’d go for love, and that love is a real emotional draw that will pull readers into the novel, force them to sympathize with Bobby Dollar’s plight, and relate to him on an intimate, human level. This all works together real nicely to make sure you enjoy the plot for what it is, but Happy Hour in Hell probes something a bit deeper without readers really realizing it is happening.

One thing that really makes Happy Hour in Hell as wonderful as it is, how much fun Williams is obviously having writing it. There are little nuances, quirky similes and descriptions sprinkled throughout this novel that really highlights that fact. Despite the darkness, and the inventive twist that is hell and its denizens, the rip-roaring adventure, Williams is having a ton of fun and the prose, dialogue, and Bobby Dollar shines because of it.

Happy Hour in Hell, is shockingly wonderful, beautifully dark, gloriously imaginative, and fantastically inventive. If you haven’t read it yet, read it. Williams has outdone himself, and he obviously had a hell of a time doing it (notice what I did there?). Bobby Dollar is addictive, fun, deep, and gets better with each page that you’ll inevitably turn.