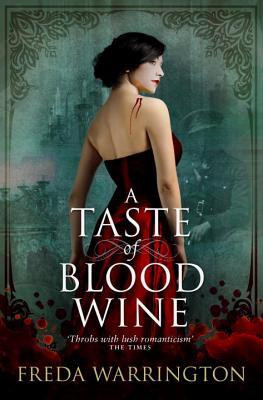 1918. A First World War battlefield becomes the cosmic battleground for two vampires, as Karl von Wultendorf struggles to free himself from his domineering maker, Kristian.
1923. Charlotte Neville watches as her father, a Cambridge professor, fills Parkland Hall with guests for her sister Madeleine’s 18th birthday party. Among them is his handsome new research assistant Karl – the man Madeleine has instantly decided will be her husband. Charlotte, shy and retiring, is happy to devote her life to her father and her dull fiance Henry – until she sees Karl …

For Charlotte, it is the beginning of a deadly obsession that sunders her from her sisters, her father and even her dearest friend.  As their feverish passion grows, Karl faces the dilemma he fears the most.  Only by deserting Charlotte can his passion for her blood be conquered. Only by betraying her can he protect her from the terrifying attentions of Kristian – for Kristian has decided to teach Karl a lesson in power, by devouring Charlotte.

I’m pretty done with vampire novels. D-O-N-E. Done. It’s over. I never really liked them, but the whole genre is overblown and I’m finished with it. So why, might you be asking, did I read A Taste of Blood Wine by Freda Warrington? Because it’s Freda Freaking Warrington! I love her writing, and I couldn’t wait to experience it again, vampires or not.

The interesting thing about A Taste of Blood Wine was that it was first published in 1992, and is just now being re-released to the masses because we’ve finally discovered the absolutely beauty of Warrington’s writing. The interesting bit of this is, Warrington wrote about vampires before it was the cool thing to write about. Anne Rice really broke open the vampire egg, but Warrington tapped into a vein that really hadn’t been tapped into much before then. Before her, vampires weren’t these sexy hunks that make you fall in love and swoon while reading about their sexual exploits. No, Warrington’s vampires are a bit more raw, believable, and true to the core of what they are than the oversexed, overhyped playboy creatures many people read about today.

Another aspect of A Taste of Blood Wine that makes it rather unique to an exhausted genre trope is the time period and location where it takes place. The early 1900’s is a unique period of history because things are changing so dramatically. Technology and war have shaped, and are shaping, so much of the world. It’s a fertile time period to drop in a bunch of fantastic elements that will change things even more. Add to that a rather empowered woman who is willing to step out of her set and defined roles and find out who she is on her own terms, and you have one memorable setting that Warrington really uses to her advantage. Everything she has created is the perfect accompaniment to the story she is telling, from the changing technology, to the social structure, to formalities and everything else. The world is changing, and her characters are a perfect addition to all of the social changes going on around them.

One thing that Warrington creates really well is her characters. She creates some of the most believable, emotionally captivating, absolutely memorable characters I’ve ever read. As a reader, I can tell with each of her books that she truly cares about the people she is portraying, and she wants them to be as realistic in the settings she puts them in as possible. It really pays off, because whatever else you might think of A Taste of Blood Wine, Karl and Charlotte really help bring the time period to life, and will make readers actually care about what they are reading. They aren’t just a placeholder in a love story, they are actual people, and Warrington makes them matter. Perhaps the only character that I didn’t find to be fantastic was the antagonist. While his motives were fairly obvious as they were revealed, he was a bit too cookie-cutter for me to really believe in him. It all seemed a bit mindless where he was concerned, but I also think that was probably the point.

Warrington’s writing is everything you’d expect it to be. Yes, this is one of her earlier books, but it’s clear that she’s always had an incredible talent for weaving together some majestic prose. Her writing style pushes A Taste of Blood Wine over the top. This might be a vampire story, and a love story, and a story of self-discovery and change, but if that doesn’t please you, you can read this just to experience the joy of some incredibly artistic writing. She never really falls into the hole of using too many words, or saying too much that doesn’t need to be said. Instead, Warrington is one of those rare authors that makes every word count, and still manages to push her plot ahead at a good pace.

So what exactly is it about A Taste of Blood Wine that readers might not like? Well, it’s a vampire story, and the world has been overrun with vampire stories. Warrington’s book is well worth the read, but the story elements aren’t new anymore. Other than the characters and the time period, it’s not incredibly unique. That’s unfortunate, because if the marketplace weren’t so saturated with the shiny vampires with cut abs that ooze sex, A Taste of Blood Wine would get all of the credit it fully deserves. As it is, I think a lot of people will pass over this fantastic book because they will see “vampire” and run. Please don’t. Warrington is a fantastic author, and this book is a call back to the roots of a saturated, watered down market. She shows what the vampire books can be, and it’s Freda-Freaking-Warrington. Her writing is nothing short of incredible.