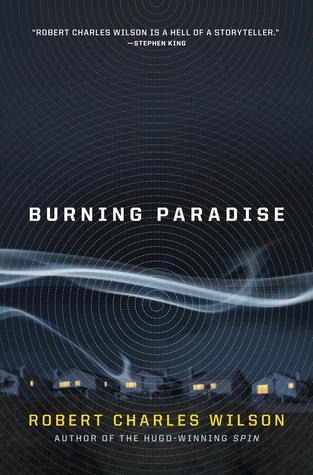 Cassie’s world has been at peace since the Great Armistice of 1918. There was no World War II, no Great Depression. Poverty is declining, prosperity is increasing everywhere; social instability is rare. But Cassie knows the world isn’t what it seems. Her parents were part of a group who gradually discovered the awful truth: that for decades—back to the dawn of radio communications—human progress has been interfered with, made more peaceful and benign, by an extraterrestrial entity. That by interfering with our communications, this entity has tweaked history in massive and subtle ways. That humanity is, for purposes unknown, being farmed.

Cassie’s parents were killed for this knowledge, along with most of the other members of their group. Since then, the survivors have scattered and gone into hiding. Cassie and her younger brother Thomas now live with her aunt Nerissa, who shares these dangerous secrets. Others live nearby. For eight years they have attempted to lead unexceptional lives in order to escape detection. The tactic has worked.

Until now. Because the killers are back. And they’re not human.

Most SciFi fans will be familiar with the name Robert Charles Wilson, and most of those familiar with that name have read Spin, which was an incredible book. Wilson isn’t a new name to genre fans. In fact, he’s lauded as being one of the best contemporary SciFi authors still writing. That’s no small achievement. So, when a new book from Wilson drops in my mailbox, I start reading it right away. I also have very high expectations.

That high expectation is probably a problem here. The thing is, Burning Paradise is a really good book, but it’s not Spin good. In fact, I’m not sure how many things are as good as Spin (that book really did it for me). It’s kind of unfair to compare the two, but Wilson fans undoubtedly will, and they will probably come back from the comparison feeling a little disappointed with Burning Paradise. It isn’t that Burning Paradise is bad. It’s just not as good as Wilson’s best.

Burning Paradise takes place on an earth that is pretty similar to ours, but different enough to keep your interest peaked. A small group of people are aware of the manipulation of history through the Radiosphere, and things roll on from there. Slowly Wilson introduces readers to plenty of new and unique alien life forms, and their hypercolony. The slow (and sort of fast in some instances) introduction of these new (and very well done) elements, goes a long way toward making Burning Paradise one of those books that keeps you reading long into the night.

Burning Paradise has pretty much everything, which makes it a surprisingly diverse book for being as short (for SciFi) as it is. The characters span the range from a young kid to older adults. There are aliens, secret organizations, conspiracies, large scale manipulation, and even a bit of alternative history. There’s a lot hear to feast on, and even though this is quite different from Spin, Wilson does a great job at covering all his bases and keeping things real and moving quickly throughout.

A lot of the problem with Burning Paradise lies in a lack of subtlety and finesse that I so enjoyed in Spin. Spin isn’t necessarily a subtle novel, but the characterization, the details and nuances really do add a layer of depth to the book that made it shine. The characters in Burning Paradise are interesting, their dialogue and plight is well realized, but they fall flat somewhere along the way. They are almost three-dimensional, but not quite there. Perhaps the reason why I struggled with their believability is because under all the fantastically unique plot and world elements, this truly boils down to a sort of “chosen hero against all odds” kind of story, and I’m rather sick of those. Under it all, Burning Paradise really isn’t that mind blowing. The trappings and world are wonderful, but the bare elements don’t really do much for me.

That’s probably where the real crux of the issue lies. Burning Paradise really is an absorbing, well written, deftly crafted novel, but I never could get over the feeling that I wanted something more than what Wilson was giving me. This will scratch any fan’s itch for Wilson’s books. The writing is there and the plot is catchy. The problem is, when you really look at this novel as a whole, there isn’t much besides underneath the shiny trappings and eloquent prose. It’s a David and Goliath story, which is interesting, but far from unique.

Burning Paradise is well worth reading, but it really is a different animal than Spin. It stands well on its two legs, but there are disappointing elements about it. That being said, this is a Robert Charles Wilson book. Anything he writes is head and shoulders above what most people could dream of writing. He really is one of the great authors of our time. Understand that. This disappointed me in some respects, but it Robert Charles Wilson disappointed me, which means that it was still an absolute delight to read.