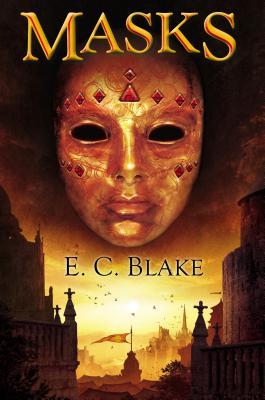 Masks, the first novel in a mesmerizing new fantasy series, draws readers into a world in which cataclysmic events have left the Autarchy of Aygrima—the one land blessed with magical resources—cut off from its former trading partners across the waters, not knowing if any of those distant peoples still live. Yet under the rule of the Autarch, Aygrima survives. And thanks to the creation of the Masks and the vigilance of the Autarch’s Watchers, no one can threaten the security of the empire.

In Aygrima, magic is a Gift possessed from birth by a very small percentage of the population, with the Autarch himself the most powerful magic worker of all. Only the long-vanquished Lady of Pain and Fire had been able to challenge his rule.

At the age of fifteen, citizens are recognized as adults and must don the spell-infused Masks—which denote both status and profession—whenever they are in public. To maintain the secure rule of the kingdom, the Masks are magically crafted to reveal any treasonous thoughts or actions. And once such betrayals are exposed, the Watchers are there to enforce the law.

Mara Holdfast, daughter of the Autarch’s Master Maskmaker, is fast approaching her fifteenth birthday and her all-important Masking ceremony. Her father himself has been working behind closed doors to create Mara’s Mask. Once the ceremony is done, she will take her place as an adult, and Gifted with the same magical abilities as her father, she will also claim her rightful place as his apprentice.

But on the day of her Masking something goes horribly wrong, and instead of celebrating, Mara is torn away from her parents, imprisoned, and consigned to a wagon bound for the mines. Is it because she didn’t turn the unMasked boy she discovered over to the Night Watchers? Or is it because she’s lied about her Gift, claiming she can only see one color of magic, when in truth she can see them all, just as she could when she was a young child?

Whatever the reason, her Mask has labeled her a traitor and now she has lost everything, doomed to slavery in the mines until she dies. And not even her Gift can show Mara the future that awaits her—a future that may see her freed to aid a rebel cause, forced to become a puppet of the Autarch, or transformed into a force as dangerous to her world as the legendary Lady of Pain and Fire.

It won’t come as any real surprise to anyone who reads my website often that I tend to struggle with young adult books. I have a hard time with books that center around the hot guy who just moved to school, or the teenager who hates how her mom makes her dress. I just don’t care. However, occasionally, a young adult book comes along that is something else, something a bit deeper and a bit richer. It is these books, these young adult (tend to be more crossover than anything else) books that I enjoy.

Such is the case with Masks by E.C. Blake. Before I launch into my review, I should take a moment to talk about this amazing cover. These are the covers that I love. I get books that look like this and everything else falls to the side because I simply have to see what a beautiful cover like this is hiding. So, bravo to the cover artists, and bravo to the publisher for using it – it did its job.

Masks is the first novel in a brand new fantasy series and in some ways it feels like a first novel. There is a lot of time spent building up the society and culture, and the various reasons for why things are the way they are. The world building is pretty well done. Aygrima feels well rounded, and Blake instantly hits readers with how out of place and confused the teenaged protagonist Mara feels with it all. The emotional appeal to readers will help them overlook many of the aspects of the world that will undoubtedly feel very done before, like the evil dictator who has complete control over his population, or the small group of people who must stand against the rules and standards of life. Yes, at its heart, this is another David and Goliath story – small people pitted a huge titan of an enemy, complete with impossible odds. It’s been done.

The masks themselves are where most of the magic in the series lies. Masks are given to each person when they come of age in a sort of citizenship right of passage. These masks show when people are thinking negative or harmful thoughts about the empire. As you can expect, much of the world building and start of the book deals with the importance of these ceremonies, and leads up to Mara’s own masking which (I’m sure this will shock you) goes completely wrong. The book really takes off from there. Blake made a somewhat interesting choice with world and magic building in Masks. There are enough world building details here to keep people interested, but Blake has left a lot of the naunces, details, and developments open ended. I expect a lot more fleshing out in further installments of the series.

The magic and world is rather fascinating and well done. The real problem lies in some characterization issues regarding Mara, who has an unnatural ability to second-guess herself to an almost annoying extent. She also seems to find herself in the position of a victim a little too often. Some plot elements are a bit too convenient. Furthermore, as I mentioned above, the plot lacks a little luster that I look for in my young adult books, and the magic regarding the mask kept raising some questions which I hope to have answered in further installments of the series.

There’s a hint of romance and the possibility of a love triangle in future books, which is all very young adult, but it’s balanced by the world and the magic, which have a very adult feel to them. This makes Masks, in my opinion, an interesting crossover novel that can appeal to a wide range of teenagers, and some adults as well.

Masks is a good book that will appeal to fans of young adult fantasy. The main problem it faces is that it feels like it has been done before. It has a sort of Hunger Games feel to it that never quite went away. Masks lacks some details that some readers might miss – like how exactly the empire runs. Some of the characters blend together, but despite that, Masks will appeal to teens because it features a character just as tossed around and confused as they are.