Something More Than Night – Ian Tregillis 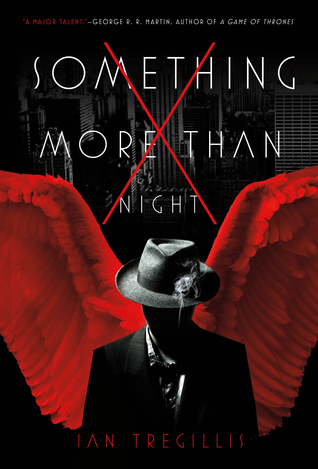 Something More Than Night is a Dashiell Hammett and Raymond Chandler-inspired murder mystery set in Thomas Aquinas’s vision of Heaven. It’s a noir detective story starring fallen angels, the heavenly choir, nightclub stigmatics, a priest with a dirty secret, a femme fatale, and the Voice of God.
Somebody has murdered the angel Gabriel. Worse, the Jericho Trumpet has gone missing, putting Heaven on the brink of a truly cosmic crisis. But the twisty plot that unfolds from the murder investigation leads to something much bigger: a con job one billion years in the making.

Because this is no mere murder. A small band of angels has decided to break out of heaven, but they need a human patsy to make their plan work.

Much of the story is told from the point of view of Bayliss, a cynical fallen angel who has modeled himself on Philip Marlowe. The yarn he spins follows the progression of a Marlowe novel — the mysterious dame who needs his help, getting grilled by the bulls, finding a stiff, getting slipped a mickey

Angels and gunsels, dames with eyes like fire, and a grand maguffin, Something More Than Night is a murder mystery for the cosmos

304 pages (Hardcover)
To be released on December 3, 2013
Published by Tor
Author’s webpage

Have you ever thought to yourself, “Self, you know what would really kick off this holiday season in fine style? A book about a murdered angel. Yep, that would make this December the best December in the history of ever.” Well, have no fear, my friends who desire to read such a book, Something More Then Night is about to be released, and it has your name (whatever your name is) all over it.

Tregillis made a hell of a name for himself with his Milkweed Triptych, which is, might I add, one of my favorite trilogies ever written. Ever. It’s dark, deep, thought provoking, uncomfortable, with some prose that shake you to your core. That is a series that has stuck with me and put Tregillis firmly on my radar of authors to watch.  Then Something More Than Night lands in my mailbox and my mind says, “Tregillis?! Must. Read. Now.” So I read it, and I read it with the expectation for something amazing because Tregillis is an amazing author. And, I (don’t) hate to say it, but I wasn’t disappointed.

Much like the Dreamwalker by C.S. Friedman that I reviewed last week, this book is something completely and absolutely different, written by an author who may or may not have been pigeonholed into dark fantasy. This is dark, but it’s a lighter, easier sort of dark and it’s a lot of fun with very little discomfort. Readers shouldn’t start Something More Than Night expecting something like the Milkweed books, because it’s worlds away from those books in every possible way. Keep that in mind. This is Tregillis, but it’s a different breed of Tregillis.

One thing all of Tregillis’ books have in common is the stunning prose that flood his books with atmosphere and bring the scene and situation to glorious life.

“They murdered one of the Seraphim tonight.

Gabriel streaked across the heavens like a tumbling meteor, his corpse a ball of sublimated perfection. He had been a creature of peerless majesty, but now the throes of his death etched the firmament.” (Pg. 1)

Something More Than Night has a distinct noir feel, which makes the prose a little more raw, a little less polished. That raw and less polished feel actually pays off, as it infuses this book with a sense of time and place. The situation is gritty, and Tregilis’ writing makes that an unmistakable detail of the vibrant world he has created.

The world is really interesting, and it is incredibly complex considering the short amount of time Tregillis gives himself to establish it. Slowly it will unfold for the reader. The mortal realm is obviously a future version of our world. Then there’s the Pleroma which is sort of a heavenly place that is an interesting mix of earthly and extraordinary at the same time. The Magisteria is where the angels and the more-than-human creatures live. This place is made up of memories, where angels create their own reality based on the lives they’ve lived and their various happy places. METATRON, or the voice of God, is a nice, humorous, if impersonal and ambiguous touch to it all.

The world is, as you can tell, very layered, and there are rules for interactions between the different realms, or interactions between angels and humans, with steep repercussions if those rules aren’t adhered to. It takes some time to wrap your head around, because it is revealed in a trickle rather than a waterfall, but for all that, it is a brilliant multi-layered reality that is so well realized, and even brutal when you least expect it.

Then you get into the characters. Bayliss is a fallen angel who has lived among humans for a few hundred years. He’s one of those characters that you can’t help but love. He’s flawed, obviously fallen, and is rather self-interested. He also has one of the most unique voices I’ve come across recently. Bayliss is a character that would seem perfectly at home in a crime novel written in the twenties or thirties. For example, this conversation between Molly and Bayliss:

(Bayliss) “Why are you beefing me, lady? You’re the one had me down for a pigeon.”

(Molly) “I wish, just once, you would talk like a normal person.”

(Molly) “I haven’t yet known what you were getting at. Not ever.”

(Bayliss) “Hey, I know I got a front-row seat to the highlight reel…”

On the flip side, you get Molly, a rather mentally mixed up adult who happens to be in the wrong place at the wrong time and gets tagged by Bayliss and thus, ends up dead and learning how to be an angel with very little help from Bayliss himself. They butt heads a lot, and Molly has plenty of anger and emotion simmering under the surface to keep things interesting. However, she is more of a modern voice, and her story, as well as the emotion that she seems to barely contain (and sometimes not contain) throughout the novel, adds a nice sensitive touch and approach to the story as a whole. Molly is a necessary balance for Bayliss and just as memorable in her own ways. These are two very distinct, very individual characters that Tregillis has crafted with an expert hand. they are the sort of characters that I love, because they are so absolutely real.

Something More Than Night might seem, on the surface, to be yet another who-done-it type of noir novel, but rest assured that this is something totally different. Tregillis combines his incredible prose, and stunningly complex world filled with unforgettable characters to create something new, nuanced, and different. This book is impossible to put down, and is an incredibly fast mover. It’s totally different than anything I’ve read from the author before, but that’s not a bad thing. Something More Than Night shows Tregillis at his finest. If it might take a little patience to be able to visualize everything that is taking place, and the world it is taking place in, but the patience will pay off ten fold. This is one of those books you shouldn’t miss.