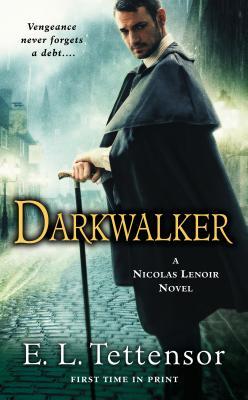 He used to be the best detective on the job. Until he became the hunted…

Once a legendary police inspector, Nicolas Lenoir is now a disillusioned and broken man who spends his days going through the motions and his evenings drinking away the nightmares of his past. Ten years ago, Lenoir barely escaped the grasp of the Darkwalker, a vengeful spirit who demands a terrible toll on those who have offended the dead. But the Darkwalker does not give up on his prey so easily, and Lenoir has always known his debt would come due one day.

When Lenoir is assigned to a disturbing new case, he treats the job with his usual apathy—until his best informant, a street savvy orphan, is kidnapped. Desperate to find his young friend before the worst befalls him, Lenoir will do anything catch the monster responsible for the crimes, even if it means walking willingly into the arms of his own doom…

When I first saw this book I kind of rolled my eyes and thought, “Fantastic. Another fantasy noir with a jaded-by-life quippy lead character.” I almost didn’t want to review it, but something kept pulling me back. In the end, I’m glad I gave Darkwalker a shot. It is a fast, fun (and rather dark) read that surpassed my meager expectations.

Darkwalker is sort of a slow burn novel at the start because the author takes time to set things up perfectly. While not much happens during the start of this novel, the author is painting a vivid picture of the world the book takes place in. The city of Kennian, where most of the book takes place, is pictured to be sort of a backwater area – rural, not much to do. In fact, Nicolas laments the city where he lives for many of the same reasons I lament the state I live in, so I felt a distinct kinship there. That being said, Kennian is an interesting area, for all that it is rural and lamentable, there is a nice mixing bowl of culture that kept things from feeling too Victorian-esque. There are immigrants, the shunned minority from that other place no one likes, the downtrodden masses, the crime and homelessness, balanced by the solons and upper class culture that the protagonist occasionally comes into contact with. Kennian is one of those cities that seems alive because it is so real, and I loved that about it.

Nicolas himself is one of those characters that evolves and changes so much over the course of the book that he’s nearly as entertaining and enthralling as the book itself. Darkwalker opens up with Nicolas investigating a case, which he basically brushes off, despite the pained family members who he is there to help. In fact, Nicolas is probably one of the most unlikeable characters that I’ve run across for a while. His apathy toward everyone and everything basically follows him around like a perfume. This guy hates life, and he hates it so strongly you can almost taste it. However, things evolve over time and it becomes clear why Nicolas acts the way he does. His attitude evolves, as does the readers tolerance for why he can be such a cold jerk sometimes. It’s actually really well done, and the evolution of Nicolas makes me think that this book is as much about him as it is about the mystery in which he finds himself embroiled. Bravo for character development.

The plot of Darkwalker basically focuses on mysteries and relationships. Readers will learn about the mystery of Nicolas’ past, and how that is affecting his present. The street boy that plays such a huge role in the plot as it unfolds is absolutely endearing and a lovely counterpoint to the almost overwhelming bitterness that Nicolas feels at times. However, when everything comes to a head, you really see Nicolas’ humanity and his ability to care. As I said above, his evolution throughout the book is almost more interesting to me than the plot itself. However, the plot is a mystery, and it unfolds almost perfectly. When things start rolling, they really roll. Tettensor holds nothing back, and because of that you’ll probably finish this book a lot faster than you thought you would.

The ending is nicely done, and the answers that are revealed are actually quite surprising for me. Being surprised by an ending is a rare treat for someone who reads as much as I do, so I feel like I should really give Tettensor some props for keeping the surprises rolling throughout the book.

Though I loved this book, nothing is perfect. Some readers will probably find themselves put off by the attitude of our protagonist. The world, while very well done and vivid, lacks a little finesse in some areas. Some of the secondary characters feel a little cookie-cutter. However, when I look at my list of pros and cons, the fact remains that this fairly short book packs a massive punch. It’s dark, fun, unique, and emotionally jarring. It starts slow but really works itself up to a surprising pace fairly quickly. The ending is surprising and perfect.

In all honesty, what I loved the most about Darkwalker is that this book fell into almost none of the pitfalls that so many books fall into. Tettensor has her own unique vision and she carries it out almost flawlessly. She could have done so much that I’m sick of (sorry). She could have made a quippy protagonist who is jaded by life and waiting in a dusty office somewhere for his next job, which will doubtlessly pit him against the empire/kingdom/whatever. She could have done that so easily, but she didn’t. She never let Darkwalker turn into the stereotypical. She kept it clear from all of that and really let her imagination fly free. I can usually smell debut novels a mile away, but I honestly didn’t know that it was a debut until I sat down to write this review. That’s saying something quite impressive right there. If this is any sign, I think Tettensor has great things in store.

I can’t wait for more.