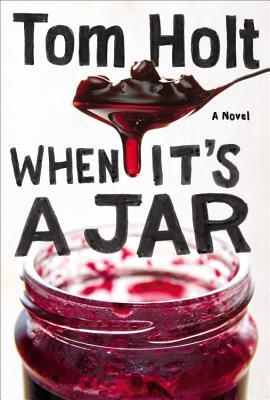 Maurice has just killed a dragon with a bread knife. And had his destiny foretold… and had his true love spirited away. That’s precisely the sort of stuff that’d bring out the latent heroism in anyone. Unfortunately, Maurice is pretty sure he hasn’t got any latent heroism.

Meanwhile, a man wakes up in a jar in a different kind of pickle (figuratively speaking). He can’t get out, of course, but neither can he remember his name, or what gravity is, or what those things on the ends of his legs are called… and every time he starts working it all out, someone makes him forget again. Forget everything.

Only one thing might help him. The answer to the most baffling question of all…
WHEN IS A DOOR NOT A DOOR?

Tom Holt is one of those guys who, until recently, I’ve heard of but haven’t ever really experienced. I say, “experienced” instead of “read” because that’s how his book came across to me. It’s more of an experience than anything else. You don’t just read what he wrote; you get a hell of a workout while you read it because you’re laughing so hard and it even manages to exercise some unexpected cranial muscles.

Tom Holt is English, and that’s obvious due to some word choices (like “rubbish” instead of “trash”) and also from his telltale English humor. When It’s A Jar is dry, with those creative observations that make me bust up laughing. In a lot of ways, Tom Holt reminds me a lot of Terry Prachett minus the Discworld aspect of things. You’ve got the unexpected protagonist who has mundane in every sense of the word, thrust into something he won’t ever really understand or fully believe, making some absolutely hilarious observations while he’s doing it.

When It’s A Jar tells the story of Maurice, who is a perpetual underachiever. He’s the guy who gets through life by looking busy as often as possible so people don’t realize that he never actually does anything. Then interesting things happen. He slays a dragon, his friend Stephanie/Steve is whisked away, someone wants him to find someone he’s never heard of before, magic donuts are involved, and the multiverse theory. What’s surprising is, beneath all the humor and funny descriptions that Holt uses in When It’s A Jar, the book is actually quite complex. I’ll probably have to read it again to make sure I understand all the theories and plot points.

That’s not a bad thing. In fact, the complexity despite the humor is probably what I loved most about When It’s A Jar. It seems that Tom Holt is good at writing on a number of levels. Through Maurice readers experience what it is like to be thrust into a role you aren’t prepared for, and might not want to be thrust into. The plot itself plays a lot with what, exactly, reality is. The multiverse theory is fascinating and the way that Holt uses it in his book is genius. Furthermore, there is some more subtle depth as Holt talks briefly about economics, free will, the impact of actions and choices we make, and so much more.

Hilarious? Yes. Deep? Yes, but not oppressively so. In fact, When It’s A Jar could easily be read on the surface level. You can turn your thinking mind off and just enjoy this book for what it is and probably love it just as much as if you read this book to laugh and think about things a bit differently.

Maurice is a character that, at first, I felt no interest in. He’s purposefully boring, working the typical 9-5 job where he basically waits until the day that he will be fired. But he grows on you pretty quickly. Though there was points throughout the book that Maurice’s rather flat personality made the book feel a little flat, it was easily forgivable. He’s that kind of character, and Holt wrote him well. He lacks a little bit of color, and it took me some time to realize that that’s the point.

“Amazing,” he said. “Because, well, just look at you. You’re a mess. You’re not just feckless, you’re a black hole into which feck falls and is utterly consumed.” – From When It’s A Jar by Tom Holt

When It’s A Jar is a fast moving book, and Holt’s easy writing style made me feel absolutely absorbed in the happenings very, very quickly. This is one of those books that you’ll be saying, “Just one more page” about all night long. You’ll also be laughing quite a bit, so if you share a bed with someone, you might want to make sure you read this in the living room or something. It’s rare that I come across a book that works so flawlessly on so many levels, with such an easy flowing writing style as Tom Holt’s.

When It’s A Jar was exactly what I needed. It’s light, fun, fast paced, unassuming, and rather deep all at once. Holt never overdoes anything. Maurice is one of those characters that you don’t expect to ever find interesting, but he manages to interest readers, regardless. The circumstances he finds himself in, the discussions, his inner monologue are all priceless.

I have no idea why I never read a Tom Holt book before now, but I think that’s pretty criminal and I completely plan on immersing myself in many of Holt’s books as soon as I possibly can. Fans of Terry Pratchett won’t want to miss this author, or this book. When It’s A Jar is one of those rare books that flawlessly hits all the right notes.