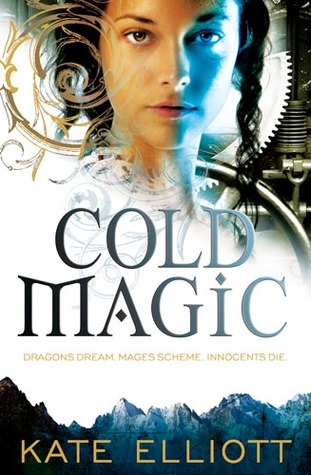 It is the dawn of a new age… The Industrial Revolution has begun, factories are springing up across the country, and new technologies are transforming in the cities. But the old ways do not die easy.

“I was not a bard or a djeli or an historian or a scribe and I was certainly not a sage, but that didn’t mean I wasn’t curious…”

Young Cat Barahal thinks she understands the world she lives in and her place in it, but in fact she is merely poised, unaware, on the brink of shattering events. Drawn into a labyrinth of politics involving blood, betrayal and old feuds, she will be forced to make an unexpected and perilous journey in order to discover the truth, not just about her own family but about an ancient secret lying at the heart of her world.

Cat and her cousin Bee are part of this revolution. Young women at college, learning of the science that will shape their future and ignorant of the magics that rule their families. But all of that will change when the Cold Mages come for Cat. New dangers lurk around every corner and hidden threats menace her every move. If blood can’t be trusted, who can you trust?

From one of the genre’s finest writers comes a bold new epic fantasy in which science and magic are locked in a deadly struggle.

Cold Magic is one of those books that I read during cancer treatment, and thus, remembered none of it at all during this second read through. I picked the entire series up on a whim at the library. I’m glad I did. Whatever my first impressions were, I can promise you they are different this time through.

Cold Magic tells the story of young Cat, who is coming of age in a very different England than we are familiar with. In fact, the entire world is deliciously different. While the scope of the novel is very focused, and the world remains small, there are hints dropped throughout the book about a wider world full of wars, Napoleonic characters, magic, trolls, a very tribal culture throughout Europe and constant unrest through border skirmishes and so much more. While the focus of the novel is fairly narrow, these small hints throughout the text make the scope of the world feel so much broader and more interesting than it could have without Elliott’s intelligent use of world building.

Cat is a character that grew on me. I have to admit that at the start of the novel, the talk between Cat and Bee made me think this was yet another stuffy Victorian era novel with pretentious female leads that would drive me insane. However, once the action gets going (which really doesn’t take that long at all) it quickly becomes apparent that, while many of the social norms might harken unto the Victorian era that so drives me crazy, the characters are very strong and capable in their own rights. Never did I feel that Cat was a slave to tradition or social standing. The interaction between Cat, Bee and the other characters that pepper the book felt normal, natural, and if proper in the time period that Elliott uses, never stifled by it. Furthermore, it quickly becomes apparent that both Cat and Bee are far more layered characters than readers might first assume. Each of them has secrets, and as the novel progresses, readers slowly become aware of just how deep and all encompassing those secrets are. There aren’t any real answers presented in this book, but there are enough hints and dribbles of information to hook just about anyone and make them deeply curious.

As for the action, as I mentioned, it really doesn’t take long for things to get going. Rarely have I encountered so many plot twists, so deftly handled in any book. While there does come to be a point in the novel where many readers will be able to anticipate or even predict the ending, it really doesn’t hinder from the enjoyment level at all. Elliott weaves together plenty of local lore, cultural history, familial history, and cultural tidbits which work fantastically with the plot, adding scope the proceedings. While the events might take place in a few select locations, the world that Elliott subtly develops hints at a sprawling effect and the slight differences from Cat’s world and ours will ensure that most readers will feel invested and emotionally captivated by what is happening. Things move so quickly, and so unexpectedly, and the character development is absolutely top-notch, it is impossible not to enjoy this novel on some level.

That’s probably what the strongest part of Cold Magic is, the stunning ability Elliott has to flawlessly develop her characters as the book progresses. While most characters develop as books move forward, it was a rare treat to see how Elliott managed it with Cold Magic. Honestly, the character development was just as interesting as the plot, and Elliott gets serious props for never letting her characters fall into territory where they spend chapters feeling sorry for themselves or needing to be protected. Cat is a strong, capable woman, and I related to her intimately because she was so incredibly real. She doesn’t need help, but she is also well aware of her limitations. She is a very different woman at the end of the book than at the start, and her transformation is breathtaking, astounding, and stunningly artistic. Seriously – the character development is every bit as interesting as the plot, and the tantalizing and subtly unique world is the cherry on top of this delicious sundae.

So, now you’re asking, “Sarah, that’s wonderful, but you always say what might not work for readers in the book and you haven’t really mentioned anything besides a bit of predictability. So, what disappointed you about Cold Magic?”

Ah, dear reader, here we get to the crux of the matter. The most disappointing part of Cold Magic is that it is over.