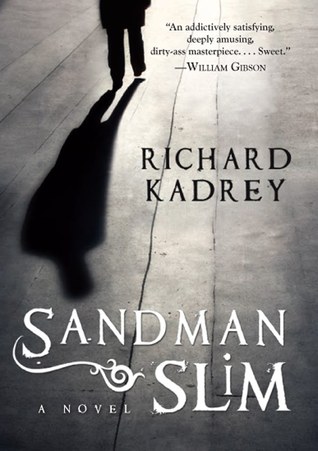 Supernatural fantasy has a new antihero.

Life sucks, and then you die. Or, if you’re James Stark, you spend eleven years in Hell as a hitman before finally escaping, only to land back in the hell-on-earth that is Los Angeles.

Now Stark’s back, and ready for revenge. And absolution, and maybe even love. But when his first stop saddles him with an abusive talking head, Stark discovers that the road to absolution and revenge is much longer than you’d expect, and both Heaven and Hell have their own ideas for his future.

Darkly twisted, irreverent, and completely hilarious, Sandman Slim is the breakthrough novel by an acclaimed author.

I have to admit that I have a soft spot for protagonists who are kind of antagonists. You tell me there’s an antihero in (insert book here) and I’m there with bells on. I love a good antihero and I don’t read books featuring antiheroes often enough. Whenever I do feast upon such a book, I feel like I’ve hit the lottery. I’m obsessed. Honestly obsessed with antiheroes. That’s fine. Whatever. We all know I’m weird, I don’t need to advertise it.

Sandman Slim, AKA James Stark is a bad boy with an attitude and he’s out for himself. The fact that his goals and aims line up with a fairly good cause is just coincidence. This guy is out for his own goals, and he’s not afraid to steal cars and kick ass along the way. I mean, this guy is screaming “baditude” and I absolutely love it. That being said, it’s not a mindless rage that Stark is feeling, there’s a very real history there, and Kadrey wastes almost no time letting readers know just what it is. You can’t help but sympathize with the guy, and feel a bit like high-fiving him because he’s doing what any of us would want to do, but probably wouldn’t have the guts to do it.

Sandman Slim is a very character focused story, while the streets of L.A. come to life for readers, there is a sense that this story could be happening almost anywhere. The fact that it is happening in L.A. isn’t necessarily important. What’s important is the events that unfold as James Stark unleashes hell on the city. The thing is, you won’t really mind the focus on Stark rather than on the place or even the plot. Stark’s voice is incredibly original and very captivating. He’s got this wry sarcasm that just works for me, and he says all the things I think all the time but never have the guts to say. This is the guy who acts, thinks, talks, and walks the way we all want to so often, but never do. There’s something about that that makes my inner repressed nerd scream with joy.

“Did I hurt your feelings again? Sorry. When this is all over I’ll send some flowers to your inner child.” – Sandman Slim

Sandman Slim isn’t all fun and games, though. There’s a very dark plot at work here that focuses on betrayal, revenge, death, and absolute depression. No matter how wry and quippy Stark gets, there is absolutely no mistaking the fact that this is an absolutely broken, haunted man. While that part of the story might get overlooked due to his rather hilarious (and almost constant) one-liners, it is there, and it does color almost everything. The truth is, only a truly broken person would do all the things that Stark does and not feel any remorse. That’s one of the delights of this book – there is a very deep, very raw, and very real emotional lining to everything. Yes, it is fairly easy to overlook in favor of the fairly loud plot and the unforgettable voice, but it is there, and it adds a lot of atmosphere and connection to the book and characters over all.

I expected Sandman Slim to be an in-and-out sort of wham-bam read – you know, the kind of book with one real plot and no side plots or any real surprises. What I didn’t get was, well, that. While the main plot is fairly loud, there’s a lot going on in the background and on the sides that hints at exciting and rather complex developments in the future. While readers are introduced to Stark and we’re given the rundown of his recent past, the world itself is complex and Kadrey doesn’t really explore it much in Sandman Slim. Stark is more than what he appears, and I’m pretty sure we’ll get to explore more about his nature in future books as well. There’s the emotional turmoil that Stark is suffering from, which makes me wonder if there will ever be any sort of closure for him. These are all rather subtle notes to the book, but they are there. Sandman Slim obviously focused on character development and an introduction to the nature of the beast (the series itself). However, Kadrey subtly wove enough in on the sides and in the background to make me think that this series isn’t all flash, there could easily be some very interesting, rather deep developments in future books.

What makes Sandman Slim work so well is the interesting blend of the action packed surface plot which makes my inner asshole scream with glee, and the subtle, deeper, background stuff which hints at so much more. While I did wish that Kadrey had expanded a bit on the world and the magic system, there’s enough promising developments in Sandman Slim that assure me that there is more to come in the series’ immediate future – more surface level action that makes my inner child happy, and some deeper developments as well. Sandman Slim is a powerful and incredibly fun start to a series that is promising to be a fantastic mix of thought provoking popcorn…. or something.