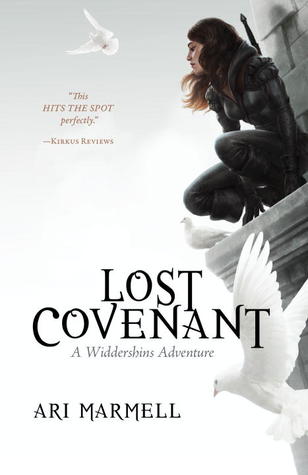 This third YA novel starring the young thief Widdershins combines the angst and vulnerability of any teenage girl with the high action of the best fantasy adventures.

It’s been six months since Widdershins and her own “personal god” Olgun fled the city of Davillon. During their travels, Widdershins unwittingly discovers that a noble house is preparing to move against the last surviving bastion of the Delacroix family.

Determined to help the distant relatives of her deceased adopted father, Alexandre Delacroix, she travels to a small town at the edge of the nation. There, she works at unraveling a plot involving this rival house and a local criminal organization, all while under intense suspicion from the very people she’s trying to rescue.

Along the way she’ll have to deal with a traitor inside the Delacroix family, a mad alchemist, and an infatuated young nobleman who won’t take no for an answer.

I have to admit, this is a series that is growing on me. I tend to enjoy each book more than the last. If Lost Covenant is any sign, I’m in for one hell of a kick in the pants with Marmell’s next book. There could be any number of reasons for this, but the truth is, I think if I went back and re-read this series from the first book, I’d probably enjoy it a lot more today than I did when I first read it. Now, I didn’t dislike it, but young adult has never been my thing so I tend to be harder on those books than others. Unfair, but true.

Lost Covenant was released late in 2013, and it was a highly anticipated book to many, many people. False Covenant left off with enough wiggle room to keep readers hooked and begging for more. Lost Covenant delivers. The thing about this book is that it’s a bit different than the other two in the series. Not in a bad way, but it has a heavier, more personal and introspective air about it.

In Lost Covenant, Widdershins and Olgun move beyond Davillon in an obvious move to run away from what happened in the previous book. This causes two important things to happen in Lost Covenant. First, the world building expands a bit, and with this expansion comes new characters and an interesting level of complexity to the plot as a whole. Secondly, moving on to another geographical location adds a lot of layers to the protagonist. She’s not just a strong and capable fighter, but she’s also a person who is willing to run from her problems, and because of that, this book is a bit more somber than I first expected.

In fact, I’d have to say that the emotion is just as interesting as the plot itself. The personal drama, the introspection and the tense and strained emotions that force Widdershins to grow and develop in uncomfortable ways is absolutely captivating, and it really adds an interesting dynamic to everything that is happening. I have to admit, I’m kind of a sucker for books that are equal parts personal struggle and plot, and this one hits the mark powerfully. The thing that Marmell does so well, however, is that he keeps the angst and super depressing drawn out sob scenes to a minimum. He doesn’t capitalize on the protagonist’s struggles or her development, but he lets it happen naturally and that really pays off for the reader.

Marmell really manages to balance the dark and light moments almost perfectly. Olgun is, as always, a source for hilarity. The dialogue between the god and Widdershins is often hilarious, and the levity is a nice touch to scenes and situations that could be overly brooding if Marmell let them get that way. However, he doesn’t, and because of that, the darker moments are so much easier to digest. The added humor also makes some of the tension in the plot more bearable, which is necessary because this book has some very intense moments.

One thing that never ceases to amaze me regarding this series is just how quickly I plow through the books. Usually if I read a book fast it’s generally not a good sign. However, with Marmell I can’t help but read them fast. Lost Covenant has a shockingly fast pace. Furthermore, Marmell really packs a lot into this book, from personal growth and development, to world building, introductions of new characters, a plot to die for, and so much more. I read this book fast not because I didn’t like it, but because that’s the only real way to read it. Once you start it, you won’t be able to stop.

If you’re wondering what it is about this book that warrants a docked star, it’s quite selfish, actually. I’m excited for Widdershins to get back to Davillion. I miss that city and the people I’ve grown to know and love who live there. I never quite stopped feeling like she should be back on her home turf. While I realize that Marmell is doing some work expanding the world and adding intricate layers to the plot that will tie his series together, I still miss Davillion.

Lost Covenant is, far and away, the best book of this series yet. Marmell keeps topping himself, and this book is a fantastic showcase of his skill. The plot is riveting, the personal growth is captivating and realistic, and the emotions and atmosphere are raw and vibrant. Don’t start this book if you need to wake up early the next day. You’ll be “just one more page”-ing the night away.