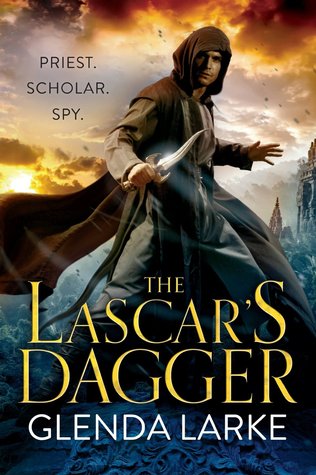 Faith will not save him.

Saker appears to be a simple priest, but in truth he’s a spy for the head of his faith. Wounded in the line of duty by a Lascar sailor’s blade, the weapon seems to follow him home. Unable to discard it, nor the sense of responsibility it brings, Saker can only follow its lead.

The dagger puts Saker on a journey to distant shores, on a path that will reveal terrible secrets about the empire, about the people he serves, and destroy the life he knows. The Lascar’s dagger demands a price, and that price will be paid in blood.

I read this book in record time, considering the fact that it is 512 pages long and my kid was sick at the time. I slammed through it in a day and a half, to be exact. There is something to be said about a book that I read that fast. I pretty much read it every spare second that I had, and it never once made me want to throw up.

That should be a blurb someday: “This book never once made me throw up.” – Bookworm Blues.

No, the truth is that The Lascar’s Dagger hit all the right notes. It’s epic fantasy in a uniquely crafted world complete with tight, flowing writing that almost instantly sucks readers in.  There’s magic and complex politics involving characters that you either love to love, or love to hate. The religion really did it for me, but I’m also a sucker for trees (there aren’t enough of them where I live).

Yes, The Lascar’s Dagger is a book that any epic fantasy lover will want to read. It has everything you’re looking for in all the right doses.

That’s probably its biggest downfall, too. It hits all the right notes, but none of them are that unexpected. While it is a very well crafted novel, at times it felt very fill-in-the-blank. There is a time and a place for comfort epic fantasy (which is what I would consider this book). Comfort reads aren’t always bad. Comfort books tend to remind my all the reasons I love the genre so much. Truthfully, I absolutely cherish those books that allow me to sit back and enjoy a good story without all the effort and deep thought some books require. Yeah, I might know where the plot is going way in advance, and yes, the characters might feel cookie-cutter, but you know what? Sometimes a person just needs that sort of thing.

If you need that sort of thing, look no further. There’s something to be said for an author who can write a comfort epic like this, and keep it vastly entertaining as she does it.

This is the first book I’ve read by Larke, and it won’t be the last. Everything I said above is true, but despite the fact that some readers might find fault in those facts, for whatever reason, the comfort aspect of this book hit me just right. Larke’s smooth prose and confident writing really helped, and the world truly is fascinating (look at the map in the book to see why). And, oddly enough, in epic fantasy books I tend to feel like the religious aspect of the novel is the least thought out, while in The Lascar’s Dagger, it felt like Larke put the most effort into her religion, Va and a’Va, and all the cultural implications presented in those deities. In fact, many of the fascinating social and political upheavals that Larke is setting up (to be explored in future installments of the series) are going to come right out of the religious foundation she built in this book.

The Lascar’s Dagger felt very much like the setup for the rest of the series. It’s obvious that Larke is only chipping at the tip of the iceberg. There is so much depth that she just starts to show readers in this book. Many of the ideas and concepts she addressed in this book felt sort of half presented, not because she was necessarily holding information back (though I did get kind of sick of one mystery that everyone knew the answer to but the protagonist), but because it just isn’t time in the story’s development for readers to know everything yet.

Probably due to that many of the characters started to only show true depth and development toward the culmination of events, and many of those developments felt absolutely fascinating to me. I honestly wished that the characters had some added depth and surprise earlier in the novel. I lamented the fact that we had the stereotypical princess fighting her role in politics, the spy, the super mean religious dude, the distant king, and the biddable prince. They all filled the epic fantasy blanks that needed to be filled. It wasn’t until the novel was almost over that I started to realize that these characters are, and will end up, being so much more than what they seem in this novel.

And that’s kind of how I feel about the book as a whole. It was surface level, stereotypical, a lot of fun, but very few surprises. There is a lot of promise that Larke will present a lot more depth and development as the series progresses, but it took most of the book for me to feel the depth I was aching for. That being said, this is a solid start to a series, and in a lot of ways it is fairly subtle. A lot happens in the background that readers will only get hints of, but these hints make me so hungry for more. There is a lot of room for Larke to explore in the future. Yes, it felt more “comfort” than “surprise” but that’s not always a bad thing.

Especially when I feel incredibly confident that I will get that “surprise!” and depth from Larke very, very soon.