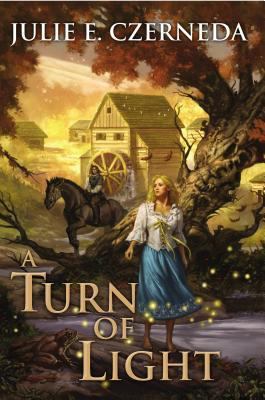 Have you ever read a book that you fell head over heels in love with purely because the writing was so breathtakingly beautiful? Yeah, well A Turn of Light is one of those. Regardless of what else anyone will ever say about this book, it contains some of the most lyrical, breathtakingly beautiful writing I have run across in my many years writing reviews.

That being said, the lyrical writing might also be a downside for many readers. It takes quite a while for Czerneda to get to the point. Sometimes it feels like you have to wade through paragraphs of lyrical prose just to understand that the sun lit the meadow perfectly, or something like that. I tend to enjoy that sort of thing, but I certainly have to be in the mood for it, and I’m sure many other readers do, too.

A Turn of Light is long, shockingly so when you consider the fairly self-contained story it tells. The length might put some people off because it is quite an investment, but don’t let it deter you. The story itself requires all the pages Czerneda uses to tell it. The world building is absolutely spectacular, especially when you consider what a closed world it really is. The characters are fantastic and have a depth and reality that I really enjoyed. Despite the fact that the book takes place in Marrowdell, and Marrowdell is incredibly small, Czerneda makes it feel like it is big enough, complex enough, and dynamic enough to be a whole world in and of itself, and for some of these characters readers will get to meet, it truly is their whole world.

The magic is interesting, and fairly diverse. There was a light quality to it that really infused the whole novel. A Turn of Light is more of an upbeat, positive sort of read that we have lost track of in favor of the grimdark and realistic fantasy books that are being released by the droves right now. The magic and the tone of the book overall reminded me of the days when I was first discovering fantasy all those years ago. It took me back to a time where reading a book made me feel emotionally lighter afterword. There is something amazing about that, and I don’t think we, as readers, feel that often enough anymore. There is a place for grimdark and blood filled epics, but these books like A Turn of Light that are both sprawling, and shockingly intimate, with their own positive outlook also have a place, and I appreciate the contrast they bring to such an amazing genre.

There is a lot in A Turn of Light to enjoy. However, with a book this long, you do get some issues with pacing. Some parts felt like they went on too long, some parts didn’t go on long enough. I think that is fairly typical of a book of this length, but the problem is there. Also, some of the characters were unbelievably ignorant in some situations, and as the magic evolved and was explained to these characters (ehem, Jenn), they still remained ignorant of just how they used it, or even when they used it. And the ending felt fairly anticlimactic to me.

A Turn of Light really illuminates an area of epic fantasy that isn’t getting nearly enough attention. It’s one of those sprawling epics that takes place in a very small area. The characters are diverse, but not in a colorful, cultural way. Their diversity is quieter, based on personalities and interactions more than anything else. There is just as much drama for readers learning about how such a small group of people survive together as there is regarding Jenn and the drama that circles around her.

A Turn of Light won’t be for everyone. There’s romance and evolution, but the plot is quieter than I think many of us are used to with the current trend in book releases. There is astounding beauty with how this rather subtle book is written, and there are some amazing truths that are presented in these passages. However, A Turn of Light is different, and that difference is what made me enjoy it so much. It’s more upbeat, lighter, quieter, with a delightful ignorance (which isn’t something I ever thought I’d say). A Turn of Light has almost nothing to prove. It is a book that you need to be in the right frame of mind to read, but once you are in that frame of mind, I doubt you will find anything that will scratch your itch better than this.