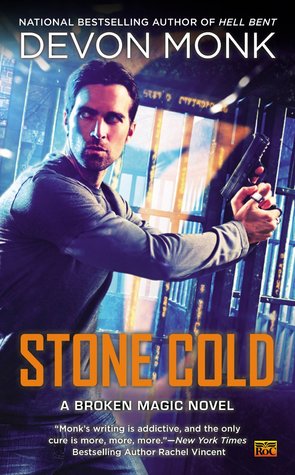 Marked by Life and Death magic, Shame Flynn and Terric Conley are “breakers”—those who can use magic to its full extent. Most of the time, they can barely stand each other, but they know they have to work together to defeat a common enemy—rogue magic user Eli Collins.

Backed by the government, Eli is trying to use magic as a weapon by carving spells into the flesh of innocents and turning them into brainless walking bombs. To stop him, Shame and Terric will need to call on their magic, even as it threatens to consume them—because the price they must pay to wield Life and Death could change the very fate of the world…and magic itself.

You know, if you asked me a few years ago if I would ever enjoy urban fantasy books, I would have said hell no. No questions asked. I never would have touched it. But, I try hard to get out of my comfort zone, and I’m glad I do. If I didn’t, I never would have discovered Devon Monk, or her fantastic books, which are urban fantasy. And, I also happen to love them.

Stone Cold is the second book in a spinoff series by Monk (from her Allie Beckstrom series/world). I have to admit, the first book, Hell Bent, in this Broken Magic series actually hooked me so hard it made me give the Allie Beckstrom books a try, which I also enjoyed so much I am having a hard time making myself finish the series (which is the best compliment this bookworm can ever give any series).

Stone Cold is the second book in a two part spinoff series, and it ends with one hell of a bang. This is important for readers because it gives a nice, round conclusion for both Shame, and Allie, in her own way. It’s nice to have a conclusion to things, and what a conclusion this is. That being said, the journey to get to said conclusion is filled with emotional ups and downs, and plenty of tension. Stone Cold for a lot of reasons, will probably pack a hell of a punch for fans of this world.

Shame is a character that has really grown on me, not just because of his biting sarcasm and his don’t-give-a-shit attitude which I absolutely love. The thing that really got me about this series, and about Shame himself, is how well Monk created the magic that he uses. It is so important for authors to balance their magic system with equal “good” points and “bad” points, and it is rare that I see it as well done in urban fantasy as I have seen Monk manage. The thing is, the magic is so much more than something that Shame uses, it actually uses him, and that’s never more clear than in this book. The tug-and-pull relationship between Shame and his magic is absolutely emotionally jarring, and will keep readers on the edge of their seats, and plenty fascinated at the same time.

The plot moves quickly. In fact, it moves so quickly you’ll probably finish this book before you really want to finish it. As I said above, the events move toward one impressive conclusion, and I sincerely hope that Monk revisits this world. I want to know more. I want to see what happens next. That being said, I can also see how this could be a nice ending point for the world in general. There’s a huge BANG at the end, but it leaves everything nicely tied so Monk can easily go onto new worlds and projects.

This duology, and indeed Monk’s writing in general, has taught me is how absolutely wonderful urban fantasy can be. Shame is one of the most tortured, emotionally jarring characters I have read in urban fantasy, but it is balanced nicely by the characters that move through the events with him. His counterpoint, and in many ways, his “balance” of sorts, Terric, is also a fascinating character, and the two play off of each other really well, but it is the intense emotions that thread the novel right under the surface that really got me. So much happens in this book, and so much is left unsaid. It is very powerfully written, and makes an incredible impression on me.

It is kind of sad that this is only a two book series, but on the other hand, it is amazing just how much of a full story Monk can pack into two books. I’m not sure I’d want a series that goes on and on. I feel like after a while the powerful story that Shame and Terric tell would be too watered down. Two books might be painful to readers who are fans of Monk’s world (they will inevitably want more. Hell, I want more.) but sometimes it is nice to see an author go in, gut punch the readers, and get out fast.

Stone Cold left a huge impact on me. Honestly, the world that Monk has created, and her fantastic writing style, coupled with her complex characters and a magic system that is equal parts beneficial and negative, really makes Monk the author that has set the bar for all other urban fantasy authors in my mind. Check this series out. Stone Cold is a powerful conclusion to a series that has really effected me in ways I truly didn’t expect.