Mazarkis Williams is finishing up her first series, and I am a huge fan of her as a person and as an author. I asked if she would be kind enough to grace my dusty corner of the internet with a guest post, and she kindly said yes. I’m thrilled to have her, and I hope you enjoy what she’s written as much as I have.

Mazarkis Williams is a writer with roots in both the US and the UK, having worked in and been educated in both countries. Each year is divided between Boston and Bristol and a teleport booth is always top of the Christmas wish-list.Mazarkis has degrees in history and physics, and a diverse set of interests accumulated while mispending a hectic youth. Cooking has always been a passion, and in addition to feeding six children and a sizeable herd of cats, Mazarkis regularly caters for crowds of permanently hungry friends.The Tower Broken was recently released and is the third, and final, book of her Tower and Knife trilogy. 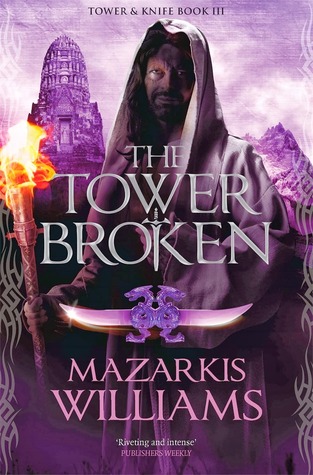 There came a time, when I was finishing the Tower & Knife trilogy with The Tower Broken, when I realized I just wanted to slap all the characters and make them cooperate. From the high priest of the dark god, to the scheming general, to the displaced duke, to the charismatic leader of an outlawed religion, they all wanted something different – and some of their hostilities ran deep. At the same time there was a bigger problem to be solved, and none of them could save the world alone. I had to figure out how to make it all work. But how?

I believe I have mentioned a few times that I’m in a gaming group. We have been playing the same game consistently for eighteen or nineteen years. While some have joined and others have bowed out, the core group has been together a long time. I don’t have a lot of experience with other gaming groups – there is only one other game I ever played regularly before this one – but I think we are unique in that our characters often don’t like one another or are even actively opposed to one another.

Our gaming system comes with a Game Master Guide which helpfully describes all the different types of players. You are meant to think, which one of my players is the eagle? Which is the turtle? Which is the cow? Which is the magpie? But in our group, we are all eagles and magpies.

A couple of weeks ago I finally stated the obvious. At the end of a session, I looked around at the group and said what we had all known for a long time: “Not a single one of us sitting around this table is a follower.” Each of us thinks we know best; each of us chafes under the direction of others. Yet somehow we always arrive at a kind of haphazard success.

Take this, for example. Some of us had to talk to a mage about a thing. But she was obviously under the mind control of a dragon, and somewhat insane to boot. So we had to “subdue” her. Subduing, for us, is never easy. Usually the person ends up … shall I say, overly subdued. But this was different! Our mage had “charm” spells! Sleep spells! We had a guy with a magic sword who could make everyone calm down and stop fighting! … Except she kept resisting everything. We could not cast a spell on her at all, and she kept yelling and threatening us, so some of our group (who did not need to talk to her about anything) started attacking. Cue the confusing scene in which some of us are trying desperately to coax her while others are hitting her with the magical equivalent of tiny cannon balls.

So what had been a united fight to get her to answer some questions became a race against cumulative damage. In a desperate move to get her to drop before she was killed, my character tossed a magic coin that would suck the oxygen out of the entire area … knocking all of us out (except for the half orc, who can go for a long time without breathing). By some miracle, she dropped first. Well, after the guy with the magic sword, I think.

That’s how we play. So imagine our greater adventure, in which the detective had orders to kill someone; the scholar was recruiting people into a super-secret do-gooder network; the rogue was collecting money for a shady criminal organization;  the mage came to aid an underground rebellion; and finally, the minstrel was having disturbing dreams about bringing some unknown entity into being. Our gods are opposed to each other. Some of us have bitter histories. We never share all the information. But we also had to find, stalk, and coordinate an attack on a dragon.

So just as in Tower Broken, we have to wonder, how will this get done? Usually our characters just move towards their own goals until someone else steps in the way. Sometimes we take care of business secretly so nobody can step in our way. We don’t always care, or even want to know, what the others need to get done. But it is not all disaster. We are capable of talking, smoothing feathers, and compromising – that is, until someone gets impatient and starts barking out orders. Some of us might try to overwhelm the others with pure charm or reason, and if that fails, there is the last-ditch dramatic gesture. Dramatic gestures really count, and can get people to agree to things they might not have. Whatever we do, one thing I know: there will always come a moment when our group is (briefly) united.

So it was with these methods I learned from gaming that I got everyone in Tower Broken working towards their goals with at least some allies (the specifics of which I can’t reveal without spoilers). The book has some negotiating. It has some barking of orders. It has some obstinacy and some sneaking around, some charm and some reason. And it has its grand dramatic gestures. I think that, as a whole, if I didn’t belong to a happily dysfunctional gaming group, I would not have got it done. While it doesn’t read like a gaming story, on one level, that’s what it is. I hope you enjoy it.

Oh, and by the way, we killed the dragon.