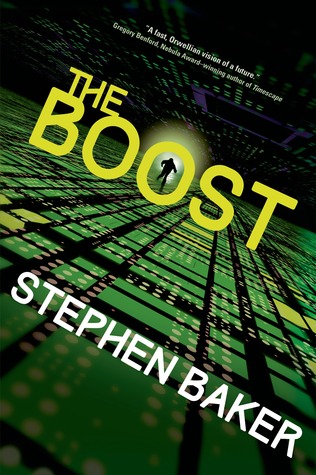 Ralf is a software prodigy. He works in the US government office that updates the software in the population’s boosts—networked supercomputers contained in a chip implanted within the brains of 99 percent of the world’s population. Invented by Chinese researchers in 2032, the boost is credited with leading humanity to its most significant cognitive leap since the discovery of fire.

Days before a national upgrade, Ralf notices that the update includes an open surveillance gate—meaning that Americans, who had negotiated high levels of privacy with the Chinese manufacturers, will now be subjected to the invasive Chinese standard. Ralf attempts to hack the boost, but is caught by agents working for Washington’s preeminent lobbyist. His boost is ripped from his head, and Ralf barely escapes with his life.

Pursued by the lobbyist’s mercenary cadre, Ralf flees to the US–Mexico border, where there are others like him—“wild” humans on the fringes of society, unenhanced by technology. It’s a frightening and backward world controlled by powerful drug lords. Ralf’s only hope is to somehow work with these wild bosses of the analog world—in hopes of winning back freedom in the digital one.

I have an admission to make.

I’m a sucker for social SciFi.

There. I said it.

I love the stuff. I really think it is interesting to see how authors visualize technology and society progressing, the relationship between the two, and how they will influence each other. Our world is such a dynamic place, and the future is full of possibilities. I love the authors who aren’t afraid to toy with what is over the horizon.

The Boost takes place in a fairly near future where everyone has computers (known as “Boosts”) in their heads. Everything we have at our fingertips is instantaneous in their minds. GPS, the internet, social networking, and so much more is right there, constantly. Life is lived as much in the virtual realm in our minds as in the real, three-dimensional world around them.

The premise is fascinating. The interplay of society and technology is nearly flawless. Woven into this tapestry are some incredibly believable, like culture wars between countries regarding their Boost software, issues with privacy (just how much is the government allowed to spy on what citizens do with their Boosts?), and a sort of technological revolution much like the Industrial Revolutions just upgraded a bit.

There is also plenty of mystery surrounding the Boost, how they came to be, and just what their primary function really is. The power play between governments, and the potential for unlimited access to the very thoughts of citizens (not just words or actions) proves to be a temptation that is, well, tempting to many.

Basically, all of this is my way of saying that the technology, the boost itself, the way it impacts society and people, is absolutely riveting.

Ralf, the protagonist, was one of the software geniuses who helped make the Boost what it became. Then, it got taken away from him. He lived with a computer in his brain, and suddenly he didn’t have one there. The impact of the sudden loss of his Boost was incredibly interesting. He couldn’t find his way home on simple streets because suddenly he didn’t have GPS. He had a hard time remembering the past, because he couldn’t recall video clips saved on his Boost anymore. It was very well done.

His journey to find his brother is also illuminating. The world he lived in slowly loses some of its allure. He realizes how sterile things are, how distant his relationships with people he cares about really are once he loses the virtual aspect of things. It’s an interesting shift, and it’s a shift I really wanted to experience more of.

The plot itself moves pretty quickly. Unfortunately, I wanted to learn more about the technology, the social and societal impact of it, the changes that Ralf went through, and less about, well, everything else. I’m not saying that the book isn’t interesting, but it is rather unbalanced. The further the plot went, the more forced things felt. The humor felt more forced, the characters started to feel less real. The ending itself felt very rushed, and left me a little baffled.

The characters managed to stray from being cookie-cutter. They were all believable and dynamic. I enjoyed their perspectives and seeing things through their eyes. Despite the fact that the main characters are so well done, there is a fairly stereotypical corporate baddie which disappointed me for numerous reasons. I’m sick of corporate baddies. They tend to feel very cardboard and pastel, very predictable, and in such a fascinating world, this one felt even more so.

The Boost is one of those books that had me rather torn. The premise is so interesting, absolutely fascinating. I really wanted to know more. The plot started out tight, and while it moves at a fast clip throughout the book, it starts unraveling at the halfway point. Things start to feel a little forced. Dialogue and humor starts to feel a little too much like a parody than something serious. The ending was disappointing.

Is this worth reading? Yes. Regardless of the flaws, this really is a fantastic exploration of the relationship between humanity and technology. If you’re interested in seeing what could happen in the future where computers become part of us, which is something I could visualize happening, then take a look. I’m anxious to see what sort of novel Baker writes next.