The Wurms of Blearmouth – Steven Erikson 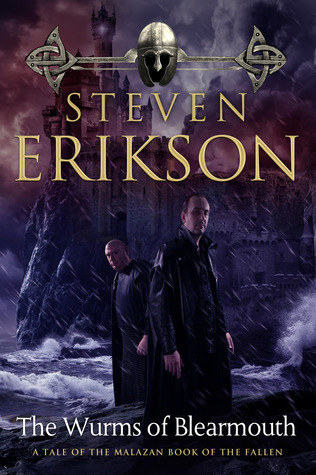 Tyranny comes in many guises, and tyrants will thrive in palaces and one room hovels, in back alleys and playgrounds. Tyrants abound on the verges of civilization, where disorder frays the rule of civil conduct, and all propriety surrenders to brutal imposition. Millions are made to kneel and yet more millions die horrible deaths in a welter of suffering and misery.

But we’ll leave all that behind as we plunge into escapist fantasy of the most irrelevant kind, and in the ragged wake of the tale told in Lees of Laughter’s End, our most civil adventurers, Bauchelain and Korbal Broach, along with their suitably phlegmatic manservant, Emancipor Reese, make gentle landing upon a peaceful beach, beneath a quaint village above the strand and lying at the foot of a majestic castle, and therein make acquaintance with the soft-hearted and generous folk of Spendrugle, which lies at the mouth of the Blear River and falls under the benign rule of the Lord of Wurms in his lovely keep.

Make welcome, then, to Spendrugle’s memorable residents, including the man who should have stayed dead, the woman whose prayers should never have been answered, the tax collector everyone ignores, the ex-husband town militiaman who never married, the beachcomber who lives in his own beard, and the now singular lizard cat who used to be plural, and the girl who likes to pee in your lap. And of course, hovering over all, the denizen of the castle keep, Lord –

Ah, but there lies this tale, and so endeth this blurb, with one last observation: when tyrants collide, they have dinner.

And a good time is had by all.

I’m a huge Steven Erikson fan. That’s no secret to anyone who has even a passing interest in my website. The man does epic fantasy right. I love his characters, his magic, and the staggering depth of his world. However, until now, I have never read one of his novellas. I’m still suffering from some weird sort of book hangover from the end of the Malazan series, and I never really wanted to find out what Erikson could do with a novella. I wasn’t sure that the man’s talent could be parsed into something smaller. I stayed away from them.

It probably wasn’t the best idea for me to start off with the fifth novella in this series of Bauchelian and Korbal Broach stories. I can pretty much guarantee you that if you aren’t already familiar with the Malazan world, a lot of the nuances here might be lost on you. However, I am familiar with the Malazan world, and I loved these two characters when I ran across them in that series. I decided that my novella experience with Erikson would start with this book and….

I really loved it.

I can’t speak for the rest of the series of novellas, but The Wurms of Blearmouth felt like a stand-alone story, chapters that could have fit into the overall Malazan saga, but were left out to stand on their own for one reason or another. While that may or may not actually be the case (I really don’t know), it works well. Erikson felt a lot more lighthearted in this novella than I expected, and that really let me sit back and just enjoy this novella. This novel is akin to cake. You start it knowing you’ll like it. Pretty soon you’ve eaten half the cake and all you can think about is how you want more, more, more!

Bauchelian and Korbal Broach are names that will be instantly familiar to just about every Malazan reader. They were incredibly unique characters that stuck out for numerous reasons. They were weird, hard to pin down and fully understand, and had a dark subversive humor that instantly made me a fan. Erikson plays on all of those aspects of their characters in The Wurms of Blearmouth. He takes what he developed in his Malazan series (and I’m sure in previous novellas) and really runs with it. The thing is, despite the fact that this is a novella, not being hammered into the Malazan group of novels made the whole thing feel a lot more liberated and free than I expected. This was a novella I could enjoy because I felt like enjoying it.

There is tension, and memorable characters. In fact, it truly surprised me just how much character building Erikson could pack into a novella. Word count doesn’t mean much when you’ve got skills like his. There are characters I was introduced to in this novella that will stick with me just as assuredly as Bauchelian and Korbal Broach.

Perhaps the most interesting part of this novella, for a lot of reasons, is just how Erikson managed to make a parody of many character tropes. For example, the villain is so over-the-top he’s laughable. He is prone to long speeches where he really doesn’t say anything at all, and then leave his rather laughably inept scribe to filter out the important bits and make him sound smart. Furthermore, even the names of some of the characters are pretty hilarious, like Spilgit Purrble. I’m not sure why that name is so hilarious to me, but I’m still chuckling about it (and him) long after I read the novel.

There’s some hilarious dialogue, and some fascinating character evolutions. The plot moves fast, and it kept me laughing, which honestly surprised me. I never really equated Steven Erikson with Terry Pratchett-esque humor before, but now I do. At two hundred pages, this is a fairly short novel. I expected it to feel too short (which is why I rarely read novellas), but it felt just right.

While it seems like much of what happens is fairly surface level, Erikson has a way with writing that will force readers to look at what is being said (and left unsaid) closely. This is a book that will keep you laughing, but a lot of the true magic of the novel is contained in all the nuances that readers might overlook if they don’t look hard enough.

By this point it’s pretty clear that I’m saying a lot without really saying anything at all about the plot. I went into this novel not knowing what to expect in any aspect, and part of the reason I was so charmed was because the discovery was just as fun as the experience. I don’t really want to rob my readers from that by giving summaries and pulling quotes out of the novel.

All I can really say is, this book impressed me. It absolutely astounded me. I plan on going back and reading all the books in this series of novellas. I think it’s pretty criminal that I haven’t read them before now. The Wurms of Blearmouth is fantastic in every respect. I truly enjoyed seeing this new, fun, charming, and still deceptively deep side to one of my favorite authors.