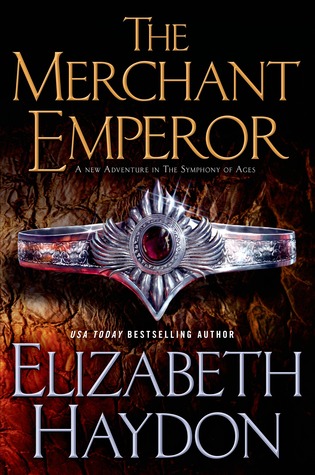 The war that they had feared is now upon them. Ashe and Rhapsody, leaders of the Cymrian Alliance, are gathering their allies to combat the machinations of Talquist, who will soon be crowned emperor of Sorbold. Gwydion Navarne remains by Ashe’s side. Anborn, Lord Marshal, has taken to the field. And Rhapsody has been forced into hiding to protect the life of her infant son.

The Merchant Emperor of Sorbold has unintentionally allied himself with a pair of demons and has begun targeting the dragons that remain on the Middle Continent. Talquist will stop at nothing until the Cymrians are wiped out and the entire continent and the rest of the Known World is under his rule.

Assailed by danger from all sides, surrounded by lies and intrigue, Rhapsody is left with one undeniable truth: if their forces are to prevail, she must join the war herself, wielding the Daystar Clarion, an ancient weapon whose power is nearly unparalleled. As she struggles to reconcile her duties as a mother and ruler, a danger far more devastating than Talquist is stirring beneath the surface of the land itself.

The Merchant Emperor is the seventh book in the Symphony of Ages by Elizabeth Hayden. This series happens to be one of the first epic fantasy series I’ve ever read, but that was years ago. I was excited about this book, but also reluctant. It’s been a long time since I’ve visited this world, and my memory isn’t what it used to be due to numerous cancer treatments.

I saw on the page that is sent along with the books that this would be a good entry point to the series for new readers. Knowing how fantastic my memory was, I decided to give The Merchant Emperor a shot without revisiting the previous books to refresh myself first.

The good thing is that Haydon really infuses this book with plenty of backstory and character building. New readers will appreciate that. Readers like me will enjoy how it triggers memories. Readers who are more familiar with this series will probably find the history a bit redundant at times. That being said, I’m a little less certain that this book is a good entry point into the series. While Haydon does a great job filling in the gaps, I think a lot of the impact and attachment will be lost without previous books.

The Merchant Emperor is told through multiple perspectives, some readers will already know and be familiar with, others will be new. The characters are all a unique blend of individual and memorable, mixed with some tropey traits. For example, at time Rhapsody can be a bit too saccharine and good. Occasionally Achmed is too gruff to be believable. Ashe seems a little too perfect. That’s not new to anyone who is familiar with the series. The new characters are the same interesting mixture. All of them have distinct voices, and a fantastic blend of flaws and strengths, but none of them stray into that gray zone I love for characters very often.

The Merchant Emperor starts after a bunch of complex political and personal things have happened, and is obviously setting the stage for more. The title suggests that this will be a fairly political novel, and it is. Rhapsody and company have changed the political landscape over the previous six books in the series, and this seventh book is really setting up the stage for repercussions to take place. Of course there will be a backlash against all this change. It makes sense, and I admire Haydon for dealing with it so logically.

However, The Merchant Emperor does feel very much like a set up for something more. A lot is said, the stage is set, the pieces are in position but nothing really happens. It is really nice to revisit these characters, and I’m anticipating some pretty incredible happenings in the future installments in this series, but The Merchant Emperor felt very much like the middle book. It was the bridge between what happened before, and what is going to happen next.

The writing itself is wonderful, and the world is rich and woven together almost flawlessly. I enjoyed the expanding political and physical landscape. Hayden has a knack with making her setting so lush and rich that it is easy to become really absorbed in it. The world itself almost makes up for any lag in the plot. In fact, it really was the world and the magic that made me fall in love with the series in the first place, and that love was renewed when reading The Merchant Emperor.

In fact, despite all of the flaws, I truly had a lovely time revisiting this world and the characters I fell in love with years ago. Regardless of where they all fall on the epic Scale of Realistic Characters, it’s easy to love them and their world. Haydon has this way with infusing her writing with passion that infects her readers.

The Merchant Emperor was a fantastic revisit to a series I fell in love with a long time ago. However, I didn’t find myself as enchanted as I thought I would be. The characters felt less dynamic than I expected. The plot felt more like a setup for something more than a plot that could stand on its own. However, it isn’t all bad. Haydon’s writing really shows her skill. Lyrical and lush, the world is vibrant and alive, and it is truly is hard for me to be anything but hungry to find out what happens next.