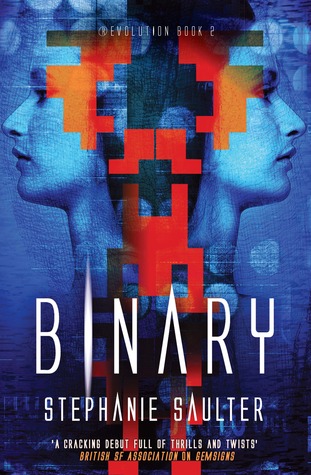 When confiscated genestock is stolen out of secure government quarantine, DI Sharon Varsi finds herself on the biggest case of her career… chasing down a clever thief, a mysterious hacker, and the threat of new, black market gemtech.

Zavcka Klist, ruthless industrial enforcer, has reinvented herself. Now the head of Bel’Natur, she wants gem celebrity Aryel Morningstar’s blessing for the company’s revival of infotech – the science that spawned the Syndrome, nearly destroyed mankind, and led to the creation of the gems. With illness in her own family that only a gemtech can cure, Aryel’s in no position to refuse.

As the infotech programme inches towards a breakthrough, Sharon’s investigations lead ever closer to the dark heart of Bel’Natur, the secrets of Aryel Morningstar’s past… and what Zavcka Klist is really after.

400 pages (paperback)
Published on: April 3, 2014
Published by Jo Fletcher Books (Not out in the US yet)
Author’s webpage

I’m learning very quickly that reading a Stephanie Saulter book isn’t something to be taken lightly. Reading Saulter’s books is an event. It’s a journey through the future, through a world so similar, but so different from our own, with characters that leap off the pages with their riveting and heart wrenching complexities. Saulter makes us face our own humanity, both the good and bad sides of it. She has such a soft touch that the complexities she deals with are just that much more poignant.

When I sit down to write a review, I usually have some idea of what I’m going to say. I know what bothered me, and I know what I liked. I know how the book made me feel. I usually sit at my laptop with some talking points and just go from there.

I’ve been sitting here for ten minutes now staring at this blinking curser – absolutely blank. It’s very rare that a book strikes me so hard that I can’t think of anything to say about it.

Gemsigns was a fantastic book, one of the best I’ve read this year. However, there were things that bothered me about it. Zackva Klist was a bit too mysterious to be believable. The godgangs annoyed me. It was an incredibly powerful book, but it wasn’t without flaws.

If Gemsigns was amazing, then Binary was out of this universe. Saulter upped the bar. Every issue that the previous book possessed now seems logical. I look back on Zavcka Klist and how her mystery and man-behind-the-curtain feel was actually something logical that Saulter was obviously using for an important plot point that was slowly built up to until it exploded in Binary. The godgangs were dealt with. The world has moved on, and every single bit of the previous book was built on in such stunning detail.

The happenings of Gemsigns are recent history when Binary starts. The world is starting to merge and become something more. The Gems and the norms are working together toward a unified future. There is still prejudice, but it’s obvious that Eli Walker and others like Aryel have worked hard to move both sides of the human spectrum into a unified, more stable and workable environment. Instead of deciding whether or not Gems are “human,” the real problems are far more intimate in Binary. Readers will open up to a world in the middle of change, and change is never easy.

Saulter narrows the scope and tells the story through a few key perspectives. We get to know more about some gems, and we are introduced to others in more intimate detail than we’ve met them before. However, what really impressed me was just how intimate she was willing to go with these social changes. Many of the most moving parts of the book dealt with relationships between husband and wife, between lovers, between siblings, and showing just how the recent social upheavals and the current progression is effecting them. For example, some of the most powerful, emotionally poignant moments are dealing with a gem and human couple who want to have children. Saulter’s ability to take some huge social struggles and show them to readers on such an intimate, memorable level is just one reason why Binary works so well.

Zackva Klist is a character that has annoyed me all along for numerous reasons, but in the first book the main reason she bothered me was because she seemed just a bit too “evil” in a world that had so much moral gray. Little did I know that Saulter was building up Klist for another starring role in Binary that would make all of her make so much sense. While some portions of the plot will be predictable, how Saulter worked Zackva and her various oddities in Binary. It was very well done, and I completely enjoyed the realistic character development regarding a character that is very closed off.

So much of Binary deserves praise. In fact, I really can’t fault much about this book. It build off Gemsigns so flawlessly, but the more intimate scope and the expanding depth of the issues at hand make the emotional punch that much more, well, punchy. The plot moves forward quickly, and I loved how I didn’t really understand much of what was happening until the last third of the novel. Saulter kept me interested, and confused – the kind of confused I enjoy, until she meticulously unveiled what was going on.

Binary is intimate. It’s about people and relationships in a changing, dynamic world. It’s about love and danger, and success and failure, and strength in unexpected places. Binary was amazing. Saulter took what she created in Gemsigns and grew on it in unexpected, wonderful ways.

Binary had officially made Saulter one of my favorite new authors – one to watch.