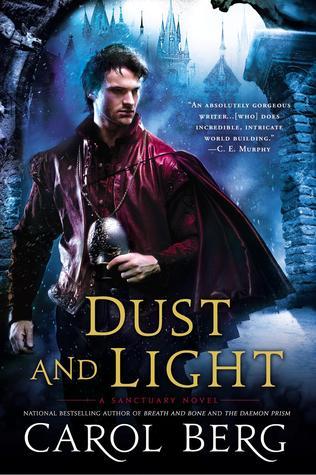 National bestselling author Carol Berg returns to the world of her award-winning Flesh and Spirit and Breath and Bone with an all-new tale of magic, mystery, and corruption….

How much must one pay for an hour of youthful folly? The Pureblood Registry accused Lucian de Remeni-Masson of “unseemly involvement with ordinaries,” which meant only that he spoke with a young woman not of his own kind, allowed her to see his face unmasked, worked a bit of magic for her….After that one mistake, Lucian’s grandsire excised half his magic and savage Harrowers massacred his family. Now the Registry has contracted his art to a common coroner. His extraordinary gift for portraiture is restricted to dead ordinaries—beggars or starvelings hauled from the streets.

But sketching the truth of dead men’s souls brings unforeseen consequences. Sensations not his own. Truths he cannot possibly know and dares not believe. The coroner calls him a cheat and says he is trying to weasel out of a humiliating contract. The Registry will call him mad—and mad sorcerers are very dangerous.

This book was sent for me to review by the publisher

Carol Berg is one of my absolute favorite authors. Her writing is incredible. Her stories come alive. The worlds she creates are more real than almost any other I could read about. Carol Berg is a master, and when I saw she was releasing another book, I just about passed out from the excitement.

Dust and Light is the start of a new duology. First of all, I have to say that I like the fact that this is a clear duology instead of a series that will go on for a 112 books. Don’t get me wrong, I like a long series as much as anyone, but sometimes it’s nice to pick up a book and know that there’s a start and a sure ending to what you’re reading.

Secondly, Dust and Light is set in a secondary world, and like all of Berg’s books, she really does some of the best world building out there and she manages to do it without infodumps. The world building is set nicely into the plot so it feels natural, and it almost seems to happen without any effort on Berg’s part, or the reader’s. The thing is, a lot of this book feels natural. It’s so incredibly realistic that I felt transported.

One of the best things about Carol Berg is that she never really shies away from social and cultural issues, and this book focuses on that sort of thing in a big way. The protagonist, Lucian, has been absolutely fundamentally altered by such social complexities that Berg seems to master so well. In his world, social classes are rigid things, and how you act, interact, and how much of yourself you show is dependent upon where you are on the social latter. Show or say the wrong thing to the wrong person, and it will hang over you and impact your life for a very, very long time.

That might sound rather done before, but it hasn’t been. Not in Carol Berg’s powerful way. Her characters are so emotional, and so complex that having this social structure and these rigid rules added to the mix is amazing. Lucian, his world, the social struggles all of it entails really tugs on the reader’s heartstrings. Furthermore, our Lucian is doing more than trying to stay afloat in a world that is trying to make him pay for something that happened years before, he’s also taking care of his little sister.

Dust and Light is an interesting mix of personal and social struggles, set in a murder-mystery plot. I’m not really that big on murder-mystery plots, but Berg really makes it work. The interesting magic system feels plausible in part due to the fact that it has enough negative aspects that balance out the positive. Furthermore, it is quite unique, and Lucian’s abilities, and how he uses them really works well with what is happening around him. It was interesting how something that seems fairly simple on the surface; ended up being just as complex as the world Berg has created.

Dust and Light starts kind of slow, and readers might feel like it drags a little. However, Berg is spending all of that time introducing us to her world, her characters, and the magic system. By the time to real mystery gets introduced, things start moving at an incredibly fast, addicting pace. Things are revealed at a steady clip, however, instead of things easing out and simplifying as plot points are understood by readers, the book just gets more complex (I love that). The ending is breathtaking. It is obvious that Berg is working toward something incredible in the next book.

So, the bottom line?

Incredible writing, and stunning world building accompanied by some incredible characters and a society that is complex, and dirty as well as beautiful. This book has all the makings of an amazing Carol Berg novel. The start of this one might move a little slow, but it picks up quickly. The ending will answer questions, and leave enough for you to be anxious for the next book.

The most important question to ask yourself is, if you haven’t read a Carol Berg book yet, why?