We Are All Completely Fine – Daryl Gregory 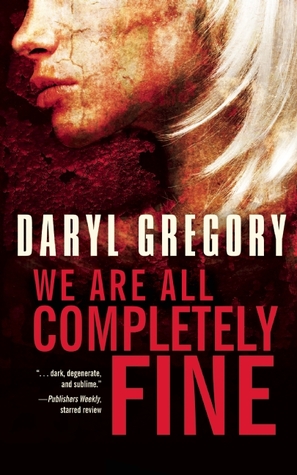 Harrison is the Monster Detective, a storybook hero. Now he’s in his mid-thirties and spends most of his time not sleeping.

Stan became a minor celebrity after being partially eaten by cannibals. Barbara is haunted by the messages carved upon her bones. Greta may or may not be a mass-murdering arsonist. And for some reason, Martin never takes off his sunglasses.

Unsurprisingly, no one believes their horrific tales until they are sought out by psychotherapist Dr. Jan Sayer. What happens when these likely-insane outcasts join a support group? Together they must discover which monsters they face are within and which are lurking in plain sight.

Daryl Gregory is an author I was just introduced to this year. His book Afterparty is one of my absolute favorite books I’ve read, along with Love Minus Eighty (by Will McIntosh). Those two books, for one reason or another, rocked my world hard. When I was given the opportunity to review another book by Gregory, I jumped on it. Yeah, the bar is high, but I’m pretty assured that I will enjoy his book(s) immensely purely because he’s one of those authors I love.

We Are All Completely Fine is a novella (182 pages total), and I tend to struggle with novellas. I like my books longer. I usually feel like I wasn’t given enough time to really enjoy the novel and immerse myself in the world and characters like I like to with the shorter length. However, this is Daryl Gregory. After Afterparty, I’m pretty sure that Gregory will figure out how to master fewer pages and wow me pretty hard despite the shorter length.

We Are All Completely Fine is one of those books that I can’t really categorize. It’s a little science fiction, a little fantasy, a little psychological horror, a little… something else entirely. That’s part of what makes it so addicting. This is a book that refuses to be categorized. While that might frustrate some readers, if you’re one of those readers who is constantly looking for something a little different, a little daring, this is probably a good one to try out.

The story is told in a unique way, sometimes first person, sometimes alternating third person, readers will get the true group dynamic and just enough of the characters backgrounds as the novel unfolds. That’s part of the beauty of it. Gregory seems to know that sometimes readers don’t need to be bogged down by history and details. Sometimes we just need to be told a story, and he does that well. His use of perspective is an excellent tool that gets readers mired in the group dynamic, while dropping tantalizing hints of what happened to all of them, and what is unfolding.

The history turns out to be just as important as the events that are unfolding. It was quite fascinating how Gregory managed to sew together a bunch of seemingly (at first) horrific events that had nothing to do together into one tapestry that fit together so flawlessly and underscored what was unfolding in the present. It’s horrific and brutal, and sometimes unbelievable, but that’s what makes it so incredible. Unbelievable things happen, and Gregory’s psychological exploration of just how those psychological things can alter us is just as fascinating as the adventure of figuring out how these interlocking pieces of past and present fit together.

I think a lot of people will complain that this book isn’t long enough, and in my humble opinion, I agree in some ways. However, I also think that this complaint is actually a compliment to Gregory. If someone is saying that a book isn’t long enough, that’s basically them saying that the book is so addicting, so immersive, and so complex that they could have easily kept reading. I completely agree with that. However, I also think that Gregory was smart to make this a novella. It’s a fast read, and he knows exactly how to tell his story and unfold details in a timely manner. This also means that in 182 pages, Gregory basically goes in, gut punches the reader, and gets out fast, leaving you gasping and breathless, full of fantastic deep thoughts. Sometimes that’s what a reader needs. I also wonder if the book would lose a bit of its impact if it was longer.

If you’re looking for an interesting, short, fast look at how past and present events can affect one another, as well as relationships in a myriad of different forms, this is a book you’ll want to read. It’s a little horrific, quite deep, and plenty surprising. You’ll wish it was longer, but I think you’ll appreciate the length it ended up being. Gregory has a way with words, and he manages to use them as a perfect tool to pull his readers into the dark depths, drag them along, and leave them gasping, trying to understand.