Huge thanks to Ria Bridges for writing this review! 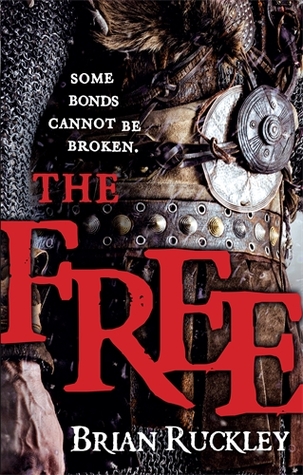 From the bestselling author of Winterbirth comes a magnificent new epic fantasy about The Free – the most feared and revered band of mercenaries the kingdom has ever known . . .

They are the most feared mercenary company the kingdom has ever known.

Led by Yulan, their charismatic captain, the Free have spent years selling their martial and magical skills to the highest bidder – winning countless victories that shook the foundations of the world. Now they finally plan to lay down their swords.

Yet when Yulan is offered a final contract, he cannot refuse – for the mission offers him the chance to erase the memories of the Free’s darkest hour, which have haunted him for years.

As The Free embark on their last mission, a potent mix of loyalty and vengeance is building to a storm. Freedom, it seems, carries a deadly price.

I had high hopes for Brian Ruckley’s The Free. As I’ve experienced more gritty fantasy stories, heavy on the action and morality displayed in shades of grey, I’ve come to realise that I enjoy them more than I would have given credit for many years ago. The Free seemed like something that would deliver that kind of hard-hitting action, given that the story revolves around a mercenary company and their last mission together.

Unfortunately, I ended up somewhat disappointed, as the book didn’t live up to my expectations.

The premise was sound, if a little bit overdone. The story centres around the Free, a mercenary group with some political loyalties that go beyond merely who can put the most coin in their pockets. Their final mission before disbanding? To bring down a tyrant who would be king, to avenge past wrongs, and to bring peace to the land once more. The story is told from two perspectives; that of Yulan, the leader of the Free, and of Drann, a farm boy turned soldier turned semi-willing contract-holder who was made to ride along with the Free on their mission, and thus provide an easy way to explain some thing to the reader by having them explained to the largely-ignorant Drann.

The book suffered, mostly, by having a cast of characters with little to no depth. Yulan was the only one who actually came across as a real person, with a history and complex emotions and any amount of, well, character to his character. Most of the others filled needed spots on a stage, notable more for what the story needed them to do than who they were. It was as though Yulan traveled with a company of plot points.

The antagonist, too, seemed fairly flat. A spoiled prince in many ways, thinking he can rule because he’s royal blood and that all those pesky smelly peasants should just bow before him. Cruel for cruelty’s sake. That’s about it. He was more of a caricature than a character, an irredeemable bad guy who exists just to stand in the way of the heroes and to give them a purpose and reason to act.

The style of writing also didn’t really do it for me. I found it to be irritatingly inconsistent at times, ranging from very evocative phrasing to such a distanced narrative that it was hard to compel myself to keep reading. For the most part, it felt rather flat, neither particularly bad nor good, which I suppose means that it could have been a lot worse even if it didn’t really do anything to stand out or encourage me to push on with the story.

There was some solid world-building underfoot, hinted at more than explicitly stated, and I wish more attention could have been paid to people and places and cultures rather than trying to explain things to Drann, since a greater look into the world and its people would have been very welcome. Readers get to see only a tiny portion, enough to know that the author has done his work in establishing things well enough to make the foundation solid, even if you don’t get to actually see the effects. There’s a confidence to the writing that I have to commend, even if the narration wasn’t all I was hoping for.

One aspect of the book that shines, though, is the magic system. At first glance it seems like a variation on the classic “four elements” system, only substituting seasonal influences. That alone would have been an interesting twist, incorporating a more varied set of talents than magic often sees in traditional tales, but then Ruckley introduces the idea of Permanences. Permanences occur when a magic-user channels more than they can handle and compensate for, the energy spills over and creates a Permanence, an embodiment of the seasonal element channeled than cannot move away from the physical world. Terrifying, destructive, and the stuff that nightmares are made from and that scare children into staying inside after dark, Permanences were amazing things, and every time one was mentioned, it was as though my ears perked up and everything became so much more interesting. Imagine something like The Bereaved, vaguely human-shaped and crying black tears of rot and decay that drains the life from everything it touches. How can that not be interesting?!

The Free isn’t a book that took great force of will to keep reading, but it was one that, after a while, I wanted to finish mostly so I could just see what happened and move on. It doesn’t have much in the way of reread value, due mostly to the lack of character interest or distinction. It’s a fairly run-of-the-mill sword-and-sorcery tale with mercenaries. Not something I’d really recommend, but not something I’d advise that people stay away from, either. Which, from everything I hear about Ruckley’s other books, makes it a shame that this was my introduction to his work. Ultimately, it’s a take-it-or-leave it book, okay but not great, and one that I don’t think will have much of an impact.

Huge thanks to Ria for writing this review. Check out more of her fantastic reviews on her website.