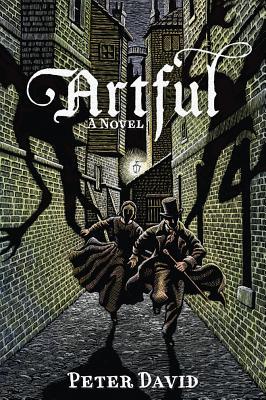 Huge thanks to G.R. Matthews for writing this review!

Oliver Twist is one of the most well-known stories ever told, about a young orphan who has to survive the mean streets of London before ultimately being rescued by a kindly benefactor.

But it is his friend, the Artful Dodger, who has the far more intriguing tale, filled with more adventure and excitement than anything boring Oliver could possibly get up to. Throw in some vampires and a plot to overthrow the British monarchy, and what you have is the thrilling account that Charles Dickens was too scared to share with the world.

From the brilliant mind of novelist and comic book veteran Peter David,Artful is the dark, funny, and action-packed story of one of the most fascinating characters in literary history.

Oliver Twist was just lucky. It could have happened to anyone. Honestly, the boy was hungry and had to be forced to go and ask for more. He could not even think to do that simple thing for himself. And then he runs away from a perfectly good job and a cushy life in a funeral parlour. Co-workers can always be difficult but a little perseverance and all could have been sorted. But that’s what he always does, gets into tiny bit of trouble and runs away. The Artful Dodger finds him on the street, gives him a place to live, a trade and then what does the ingrate do? At the first sign of trouble he runs and, by doing so, causes Dodger to lose his home, Nancy to get killed and for the gang to break up leaving all those poor children without a roof above their heads. The fact that he then gets picked up by Mr Brownlow, taken into his home and given the life of luxury was just dumb luck. What kind of hero is that to hang a book around? This is premise that Peter David presents us with when he begins his new novel, Artful.

The Artful Dodger doesn’t have that kind of luck. Life has been tough for this orphan of the streets. His reward for helping Oliver, transportation to Australia and Fagin, the kindly old Jew who took in all those boys and looked after them, gets his neck stretched by the hangman. Dickens original story only has a happy ending for Oliver.

This is where we join Dodger and Fagin. Fagin is dead and Dodger is about to be chucked onto a boat and sent to the new lands. But where Oliver relied on luck for his escape from certain doom, Fagin relies on the fact that he is a vampyre, and Dodger on his brains. The hanging is nothing but an excuse for a good sleep and Fagin is awoken by a dark figure who plans for England. Dodger escapes the clumsy guardsman and escapes into the back streets of London.

Peter David hangs the novel cleverly on a few details of Dickens Oliver Twist and writes in a similar style to the author of the original, with a modern twist here and there. Each chapter begins with a short synopsis of what is going to happen and then the prose begins to describe the events. It is an old fashioned approach, in keeping with the style of the book, and after a few chapters it feels quite normal.

Artful is soon joined in his adventures by a Princess and a Van Helsing as the battle with the vampyres takes on a country shaking importance. All the staples of (just) pre-Victorian England are present and you get the sense that the author enjoyed playing with the history, original story, and London stereotypes. There are the rich gents looking down their noses at the street urchins, the doxies protecting their pitches, judges handing out harsh penalties for minor offences, children being seen and not heard, it is all there.

In any story about vampyres the odd death by neck exsanguination is to be expected and as the story progresses these increase in frequency. We also begin to see the division in the vampyre ranks. However, the first third of the book is a little slow. A lot of time is spent explaining all the little clues, links and hints that Dickens, supposedly, left in the original Oliver Twist. Yet more time is spent explaining the world, London and the culture of the time. During all this I was really wishing the story would just get going.

And then it does. Once everyone knows who is who and what is going on the story takes off. It doesn’t do anything new or take us anywhere that story hasn’t taken us before. It boils down to a simple, chase, capture, rescue and reward format. But, it does it well. There is peril and excitement, deception and violence. The vampyres remain true to the traditional undead biters of the neck. They are incredibly strong, able to leap tall buildings in a single bound, but they have the weaknesses; crosses, garlic, stake through the heart.

The story ends with the promise of more though predictably, given the time period, it hints that this will involve Jack-the-Ripper.

Overall, it is an interesting and fun book let down by the slow start. If you push on through that, you will be rewarded.

Thanks to G.R. Matthews for writing this review. To learn more about him, and his books, check out his website.