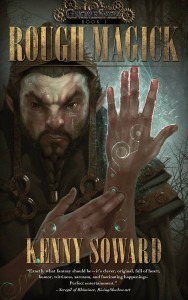 Kenny Soward grew up in a small Kentucky suburb listening to hard rock and playing outdoors. In those quiet ’70s streets, he jumped bikes, played Nerf football, and acquired many a childhood scar. His love for books flourished early, a habit passed down by his uncles, and he spent many high school days in detention for reading fantasy novels during class.

At the University of Kentucky, Kenny took creative writing classes under Gurny Norman, former Kentucky Poet Laureate and author of Divine Rights Trip (1971). By day, Kenny works as a Unix professional, and at night he writes and sips bourbon.

He lives in Independence, Kentucky, with three cats and a gal who thinks she’s a cat.

Outlining. How stifling. How constraining. How downright rude! And how dare you think it won’t kill your creativity. If you outline, then you’re just a big, dumb brick who will end up painting yourself into a corner … piled knee-high with snakes … and then a really short gnome will come out of nowhere and punch you in the gut.

That’s how a lot of writers feel about outlining.

For me, it was just sheer laziness. I didn’t want to think about acts and blocks. What the hell was all this talk about conflict and push? I mean, doing an outline would be boring and almost like … cheating! A wormhole would surely open up and devour everything I held dear.

But after overwriting a recent WIP by almost 30k words, and going through a ton of painful revising and rewriting, I knew something had to be done. There was no way I could putter around like that if I wanted to have any chance at keeping my sanity and create a functional writing gig for myself.

So, I decided to investigate how the dreaded outline might help me. Dun – dun – dunnnnnn!

It couldn’t be that bad, right? After all, I played drums in a band for years, and despite many of my musician friends being stolidly against using a metronome – the thing that goes click, click, click in a drummer’s ear when they play – I thought it really helped my creativity because I didn’t have to focus on keeping time. The metronome kept time for me. All I had to do was play along with it, which really loosened me up and allowed me to get pretty wacky behind the kit.

So, I figured I would take the same approach to outlining.

I decided to try this on CogWeaver, the third book in my GnomeSaga series. I took one month to outline, where I created the acts and blocks (sub-chapters) on note cards. I found that ideas would hit at the weirdest times, and I made sure to capture those ideas throughout the month I was outlining.

With the outline done, starting the draft seemed easy. I didn’t get hit with the crippling fear of what-to-do-next. I knew, basically, where I was going, and I was able to smash through the first quarter of the book like a knife through butter – okay, that’s a bit overused – how about, like a lightsaber through butter, I mean, like a lightsaber through a brick. Oh, you know what I mean.

In any case, little sparkles of excitement began flitting round in my belly. Yes, this happens to me.

Some things I learned:

The end result was that I became twice as productive, fearless even, able to almost double my normal word count while retaining the quality of the work. I was able to see where the best places for conflict and resolution should fit and take some time to actually give it some thought.

While it isn’t for everyone, outlining has been great for me, and I intend on using outlines for the foreseeable future. It’s almost better than sliced bread. Almost. Of course, I may come back next year and completely flame this post and call myself an idiot, but so far, so good.

Author Mercedes Yardley and I talked about outlining the other day, and after some fun discussion about why outlining does not kill your creativity, she said something beautiful. She said outlining was “like throwing butterflies in a jar instead of letting them flit all around the place.”

Kenny’s book Rough Magic is set to release on October 13. Here’s a bit about it.

NIKSABELLA the gnome has tinkered in the shadows for years, developing an invention that might change the world—even if she doesn’t know it. She has few friends and even fewer allies in Hightower, where social and academic status is crucial.

Her brother, NIKSELPIK, is an obstinate wizard who drinks heavily, sings dirty songs, and makes unmannerly passes at gnomestresses. A dark addiction consumes him, giving him increased power while also pushing him closer to death.

Dark, otherworldy creatures, foreign to the lands of SULLENOR, have suddenly appeared, making chaos wherever they go. In the wake of this, Niksabella must fight to protect her life and her invention, while Nikselpik engages the enemy as an unlikely counselor to Hightower’s military elite.

Will the gnomish siblings find their true powers together, or perish apart? And will they overcome the wounds of their childhood before it’s too late?