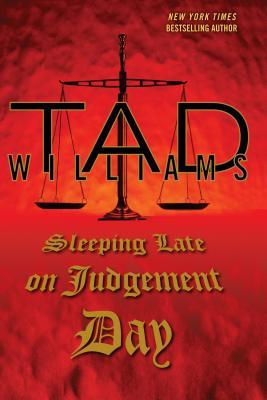 Where does an angel go when he’s been to Hell and back?

Renegade angel Bobby Dollar does not have an easy afterlife. After surviving the myriad gruesome dangers Hell oh-so-kindly offered him, Bobby has returned empty-handed – his demon girlfriend Casmira, the Countess of Cold Hands, is still in the clutches of Eligor, Grand Duke of Hell. Some hell of a rescue.

Forced to admit his failure, Bobby ends up back at his job as an angel advocate. That is, until Walter, an old angel friend whom Bobby never thought he’d see again, shows up at the local bar. The last time he saw Walter was in Hell, when Walter had tried to warn him about one of Bobby’s angel superiors. But now Walter can’t remember anything, and Bobby doesn’t know whom to trust.

Turns out that there’s corruption hidden within the higher ranks of Heaven and Hell, but the only proof Bobby has is a single feather. Before he knows it, he’s in the High Hall of Heavenly Judgement – no longer a bastion for the moral high ground, if it ever was, but instead just another rigged system – on trial for his immortal soul…

It is hard for me to end a series, especially a series written by one of my favorite authors. Bobby Dollar came out of left field and really surprised me. He was a character I loved, and really didn’t expect, but I think I loved him even more for his unexpectedness. Sleeping Late on Judgement Day is the last book in a trilogy that I have quickly come to love, and I really don’t want to see it go.

This trilogy has been interesting for a lot of reasons, but one of the primary reasons is how it started fun and light, and each book has grown darker and more series while still managing to make me laugh out loud plenty of times. Williams has managed to strike the perfect balance between depth, darkness, and humor. Sleeping Late on Judgement Day is a fantastic follow-up novel after the mind-blowing Happy Hour in Hell. This book starts almost directly after the second book ended. Happy Hour in Hell was one of the best books I read last year, but it was darker than I expected a Bobby Dollar book to be. After that, you can pretty much picture the mood in Sleeping Late on Judgement Day. It’s dark, and somewhat depressing, but also lined with hope and those crazy laugh out loud one-liners and antics that readers of the series have grown to love.

Bobby Dollar has a knack for finding himself in trouble, and that talent of his starts on page one. Things have been coming to a slow boil for a while now. The stage is set, and Williams doesn’t hold back at all. Old friends are back, and new information arises. Bobby finds himself in the unique position of being practically alone. It’s interesting to see how the series has developed Bobby. While in some ways he will always be one of those characters that is ready for a good time and a quick laugh, his exploits have matured him a bit and that’s never more obvious than it is in Sleeping Late on Judgement Day. We have the same Bobby Dollar here, but this one is a bit more ruthless, and a bit more willing to trust himself over the advice and inclinations of others, especially those he might have trusted in the past.

The secondary characters, as always, shine. Of course Bobby Dollar is the central figure, but the book wouldn’t be nearly as interesting without Caz, Sam, and Temeul. That also brings me to the next point of the novel that impressed me. The series as a whole has been a delicate balance between the dark and light forces in Bobby’s life. Nothing really contrasts as much as Heaven and Hell, and Bobby seems to be standing right in the middle of those two forces throughout the series. Bobby is also a character of sharp contrasts. He has his vices, alcohol is one, but he’s also pretty selfless in the face of adversity. However, the series itself is a twisted, sort of layered, humorous and emotional look at love, and just how much a person is willing to give up for it. Heaven and Hell, the actual places, are often reflected in Bobby Dollar’s emotional state of being, his vices, his virtues, and his unending, relentless love of Caz. That never became more clear, or more poetic and powerful, than in Sleeping Late on Judgement Day.

Williams isn’t a novice to writing. He knows how to pace his books, and how to draw together all of the plot threads that he’s left open and mysterious throughout a series. There are a ton of “ah ha!” moments in Sleeping Late on Judgement Day, but they are scattered at nice intervals throughout the book and dropped in such a way that readers will feel good about the answers they are given rather than disappointed. The ending contains quite a big “ah ha” moment that will sort of close out the series. There is easily enough room for Williams to return to this world and these characters in the future if he chooses to. That being said, some readers might be less than satisfied with the ending, as it has a sort of “open” feel to it. Not everything is neatly tied up, which is also why I wouldn’t be surprised if Williams writes more in this world in the future. While the ending works, it will probably leave some readers wanting.

Sleeping Late on Judgement Day really surprised me. It’s darker and more personal than I expected, and I loved it for that. The emotional and personal parallels between the story and Bobby Dollar are incredibly compelling. Bobby Dollar and company have grown in leaps and bounds since the series started. That growth has never really been as obvious as it was in Sleeping Late on Judgement Day. The book is flawlessly paced, and incredibly dynamic. It’s an experience and an adventure and a very satisfying end to a trilogy I never wanted to end. I sincerely hope that Williams revisits this world sometime in the future.

All of Tad Williams books are wonderful, but this one is truly something special.