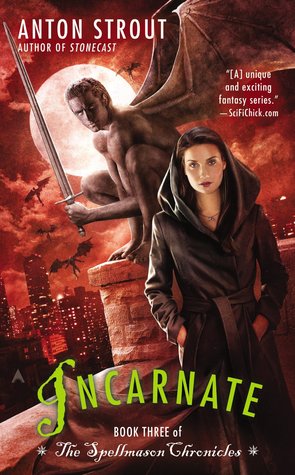 When Alexandra Belarus discovered her family’s secret ability to breathe life into stone, she uncovered an entire world of magic hidden within New York City—a world she has accidentally thrown into chaos. A spell gone awry has set thousands of gargoyles loose upon Manhattan, and it’s up to Lexi and her faithful protector, Stanis, to put things right.

But the stress of saving the city is casting a pall over Lexi and Stanis’s relationship, driving them to work separately to solve the problem. As Stanis struggles to unite the gargoyle population, Lexi forges unlikely alliances with witches, alchemists and New York’s Finest to quell an unsettling uprising led by an ancient and deadly foe long thought vanquished.

To save her city, Lexi must wield more power than ever before with the added hope of recovering a mysterious artifact that could change her world—and bring her closer to Stanis than she ever thought possible…

Huge thanks to Melanie Meadors for taking time out of her busy schedule to write this review for me.

Incarnate is the third and final installment of the Spellmason Chronicles (preceded by Alchemystic and Stonecast). I always have a hard time reviewing third books because so much has happened before them and I don’t want to spoil anything for potential readers. But let me just say this: with Incarnate, I think Strout definitely proves himself to be a strong player in the urban fantasy genre.

When I read Stonecast, the second book in the trilogy, I thought it was a strong book and had commented that Strout had found his stride. So often, many authors kind of slip with the middle of their second series, but Stonecast just took on a life of its own while I was reading it. There was so much action and I really loved the characters. Now, with Incarnate, I found it to be all that and more.

Alexandra, one of the two narrating characters, has such a strong voice and is so well developed it was easy to forget I was reading a book by a person outside of the story. Events in the book played out in my mind like a fast-paced movie, yet there was a lot of emotion at play here as well. I had to stop myself from laughing out loud several times so I wouldn’t wake up the family while I read at night, yet the humor is very nicely balanced with suspense and mystery. Come for the geeky entertainment–there is PLENTY to go around, with nods to practically every corner of the geekiverse, from gaming, to TV shows I have fond memories of growing up, to books that should be loved by everyone. But stay for the emotional kick you’ll get from watching the relationships between the characters grow and change. This is a story I found hard to finish–not because it was hard to read but because I truly did not want this to be the end. I didn’t want to close it when I was done, and honestly, got a little teary at the thought of not being able to go on new adventures with Lexi, Stanis, Rory, Marshall, and Caleb.