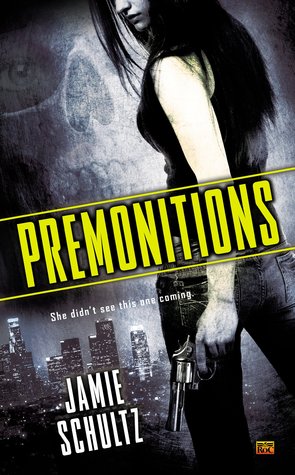 It’s the kind of score Karyn Ames has always dreamed of—enough to set her crew up pretty well and, more important, enough to keep her safely stocked on a very rare, very expensive black market drug. Without it, Karyn hallucinates slices of the future until they totally overwhelm her, leaving her unable to distinguish the present from the mess of certainties and possibilities yet to come.

The client behind the heist is Enoch Sobell, a notorious crime lord with a reputation for being ruthless and exacting—and a purported practitioner of dark magic. Sobell is almost certainly condemned to Hell for a magically extended lifetime full of shady dealings. Once you’re in business with him, there’s no backing out.

Karyn and her associates are used to the supernatural and the occult, but their target is more than just the usual family heirloom or cursed necklace. It’s a piece of something larger. Something sinister.

I really am not that into heist books, or urban fantasy. However, I am into books where authors create characters that are morally gray, and that’s exactly what the characters in Premonitions are. None of the characters are good, and none of them are evil. They all have their own reasons for doing what they are doing. That’s the kind of book I absolutely dig.

On the one hand, Premonitions really wasn’t my bag. On the other hand, I was incredibly excited to read it. Books that polarize me like that also tend to get me a bit excited due to curiosity if nothing else, so I sank my teeth into this one as soon as it showed up on my doorstep, and I finished reading it just before my surgery, and the poor author has been patiently waiting for my review until now.

Premonitions is 384 pages, which is fairly typical for an urban fantasy, however it is absolutely loaded with perspectives, perhaps a few too many perspectives for a novel of this length. However, it works. Each character is different, and the switch between characters illuminates their different perspectives and desires. Karyn is the most interesting character. She leads the crew, has strong opinions and a past to back them up.

Karyn, however, has an interesting condition where she can see slices of the future almost randomly. These can overwhelm her without a drug to ease the symptoms. Karyn was one character that I really got behind. It’s fantastic to see such a strong, capable, believable woman without her using sex or a curvy body to attain those things that she is looking to attain. Karyn fights for what she wants, and she does it claws. That ferocity is nicely coupled with her intelligence and her ability to see into the heart of the matter at hand. However, her strengths are balanced by her condition which, in some situations is a serious strength, but in others it is a burden that she will carry for the rest of her life. It’s a struggle, and it holds her back as much as lifts it up.

It is very refreshing to encounter such a strong, capable character who is held back by such a profound problem. Furthermore, Schultz writes Karyn’s perspective in such a way that her struggle will certainly evoke raw, real emotions from the reader. Her inability to often distinguish between future and present can get confusing, but it also shows her struggle in a way that readers will understand and sympathize with. In short, Karyn’s perspectives are very effective.

The other perspectives are Anna, Karyn’s best friend, Nail, another member of the gang who brings the whoop-ass. Then there’s Tommy, who is eccentric and rather mysterious and practices dark magic. Then there is Genevieve who acts as a liaison between the gang and Enoch Sobell (another interesting perspective that is somewhat hard to pin down), the man who hired them to get this occult artifact.

As you can see, that’s a lot of perspectives in one fairly short novel. While usually the change between characters is smooth, and each character truly does have their own unique voice so it is easy to keep them apart, sometimes I did feel that the sheer number of perspectives occasionally bogged the plot down and made it flow a little slower in some places than in others, and could clutter things up at certain points.

The plot itself is incredibly fast moving and full of plenty of twists and turns, made possible in large part by the multiple perspectives and the rather gray feel to all of the characters. It’s quite fun to read a novel and try to figure out who is on which side of what line. Mixed into that are all sorts of shenanigans that are quite entertaining in the face of all the thought provoking character developments that go on.

Something I really must address is just how brave Schultz was, in many ways, for writing this book. Premonitions features strong female leads, a woman-woman love interest, and a conditions which is absolutely disabling. In a genre that strives for believable diversity in its book, Premonitions is a roaring success, and I really applaud Schultz for writing it.

Urban fantasy is a genre I struggle with, but Schultz really did a great job at jazzing it up a bit and flooding it with memorable characters. Premonitions is a book I didn’t expect to like it, and I wasn’t even sure if I wanted to read it, but I’m glad I did. It’s a delightfully diverse book, with a fast paced, poignant plot, and enough action and adventure to keep just about any reader happy. While there might be a few too many perspectives, and it does occasionally bog things down, that is a very small complaint in the face of so much done so well.

In sort, Premonitions surprised me in the most delightful way.