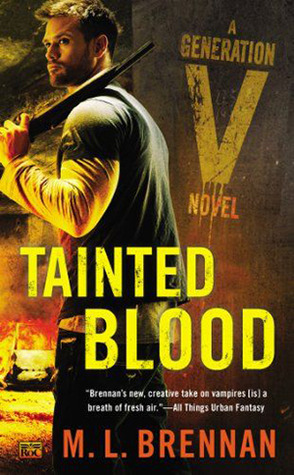 In the third Generation V novel, Fortitude Scott proves that working with family can be deadly…

Former film student Fortitude Scott is finally gainfully employed. Unfortunately, said employment happens to be with a group of sociopathic vampires—his family. And as much as Fort is loath to get too deep into the family business, when his brother, Chivalry, is temporarily unable to run the territory, it’s up to Fort to keep things under control.

So when the leader of a powerful faction of shifters turns up murdered, Fort finds himself tracking down a killer while navigating dangerous rivalries, longtime grudges, and hidden agendas. Even with the help of his foxy kitsune sidekick, Suzume, he’ll need to pull out all the stops to hunt for the paranormal assassin.

But as he calls on fairies, witches, and ghouls for help, he discovers that the problem is much bigger than a single dead werebear. The supernatural community is preparing for a massive shift in power within the Scott family leadership—and Fort has landed right in the middle of the gathering storm.

Tainted Blood is the third book in M.L. Brennan’s American Vampire series. This is one of those rare series that has taken the incredibly exhausted, very overdone vampire mythos and turned it on its head. Throughout these three books, Brennan has proven to me that vampires are only overdone and exhausting if you let them be.

Tainted Blood is a little different from the other books in the series. It opens with the family mourning the death of Chivalry’s wife. This serves as a sort of gateway into the vampire culture that neither Fort or the readers have really learned about or experienced yet. It’s a serious, somber moment for the family and while all their reactions and feelings are different, none of them are very light. That’s a very different opening tone than readers will have experienced in the past two novels, but that’s not a bad thing, but it does set the stage for the tone throughout the novel.

On one level this novel is very personal, and Fortitude has to learn a lot about his vampire heritage and what will be required of him once he transitions. These are uncomfortable revelations for him, as he’s been trying to hide from his heritage for a while. Furthermore, it is undeniable that his mother is ailing, and will soon pass from this mortal coil. Chivalry, the man who is usually there for Fortitude is lost in grief, so Fort is forced to face a lot of this stuff head on and very alone.

Don’t get me wrong, there is still a lot of humor here, and plenty of other situations that take place, but perhaps the most compelling was Fortitude Scott facing himself when he’s spent much of the past two books avoiding doing just that. Furthermore, we get to know Prudence a bit better. Her awkwardness and don’t-give-a-damn attitude regarding much of the pettiness of humanity is an awkward, but hilarious balm on much of the emotional turmoil that Fort is dealing with.

Suzume takes front seat along with Fort in this novel, which is where she should be. She is probably my favorite character in this series due to her humor which often had me laughing out loud. Her relationship with Fortitude develops a bit more, which was also welcome. However, Suzume’s real function in this novel seemed to be her ability to keep things a bit light when they otherwise wouldn’t have been. Her wry humor was the perfect balance to all the other elements of the novel.

The case that they are investigating is quite interesting, and it brings it all back to the real central theme of the novel: family relationships. Family bonds are hard to tackle, and in the complex world that Fortitude’s family, and the other nonhuman families live in, it’s even more complicated. There is a very real tension here, and a darkness that settles over the book while Brennan masterfully plucks the strings of what these relationships are all about. Love isn’t always easy, and neither are relationships. Brennan really illustrates this perfectly, the push and pull between all sorts of different people is very well done, very realistic, and incredibly emotionally compelling.

Tainted Blood deals with a different “species” of people in Fortitude’s reality, the “werebear” (which is exactly what you never want to call them), and there’s a brief brush with a lake entity early in the novel. This highlights one of my favorite aspects of this series so far. They are all very different than what I’d expect, and she often researches mythology from other cultures to create the characters that she peppers her books with. This time, after talking with her, I learned that much of the folklore she drew from was from Finland. This attention to detail, and her research really makes the otherness of her characters shine, but it also makes them very realistic and nicely drawn.

There are some political movements which make me think that Brennan is setting the stage for an incredibly powerful shakeup in the next novel or two. I’m sincerely looking forward to it. The family tension, and Fortitude’s continuing development and his desire to face it rather untraditionally, and all of the other elements tackled here (which I won’t mention due to spoilers) really developed some tension that made me itch to get my hands on the next book in the series. The case was interesting, but it’s the relationships and the politics that really impacted me with this one.

Tainted Blood is my favorite book in the series so far. Brennan isn’t just telling a story, but now it’s obvious that she’s taking this whole thing in a certain direction. Fortitude is a fantastic character, and the political and personal tension he felt throughout the novel was incredibly well done. Brennan moved her players around a bit, and left the ending just open enough for readers to anxiously wait for the next book in the series. Most importantly, however, is how unique she keeps things. Her characters are created from her very obvious, in-depth research, which makes them so real and her books are written with an undeniable, infectious passion. The plot is perfectly paced. The politics are believable, but not overwhelming, and though this is more serious than the last two books, it’s still laugh-out-loud funny.

Basically what I’m saying is, this series keeps getting better and better with each installment. If you haven’t read it yet, why not?!