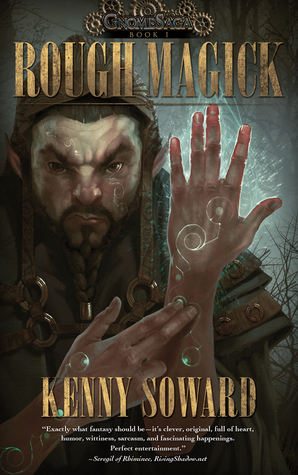 Niksabella the gnome has tinkered in the shadows for years, developing an invention that might change the world, even if she doesn’t know it yet. She has few friends and even fewer allies in the city of Hightower, where social and academic status is quite important.

Her brother, Nikselpik, is a cantankerous wizard who drinks too much, sings dirty songs, and makes rude passes at gnomestresses. A dark addiction consumes him, a habit called bugging, which gives him increased power and feelings of euphoria while pushing him closer to death.

Dark creatures from the ultraworlds have come calling. Niksabella must fight to protect her life and her invention, while Nikselpik engages the enemy as an unlikely guest of Hightower’s military elite. Niksabella and Nikselpik must find their true powers together, or perish apart. Will they heal the wounds of their childhood before it’s too late?

This book was kindly reviewed by Moses Siregar III.

Remember that funny kid who played a gnome in your D&D game? That’s Kenny Soward, except he wrote the freaking book on the ingenious little buggers, and his gnomes are darker, smarter, and much more compelling.

Meet Nikselpik, a mad genius of a wizard—his sister Niksabella is the engineering genius in the family—with a brilliantly-written substance abuse problem. He is a “bugger,” literally, as his little black bugs dig under his forearm and deliver a stream of intoxicating, paranoia-inducing high times. He has also run up quite a tab at the local taverns of Hightower, where he spends more than his fair share of hours fantasizing about the dirty pillows of buxom gnomestresses. He’s absolutely great.

And if your world is ever invaded by some uber nasty critters from another dimension who want to reanimate the bodies of your fallen comrades and swarm across the world like a horde of necromantic witches, trust me, Nikselpik is the bug-addicted, boob-obsessed, gloomy old gnome you want standing between your race and total extinction.
And yet, there is a real sweetness and charm to ROUGH MAGICK, a sense of humor and bonafide lightness. It’s sort of The Hobbit meets Aliens meets Dirty Old Man (I made the last one up—Kenny Soward is indeed unclassifiable). It’s a unique tale, with many subtle flavors in this gnomish homebrew making for enjoyable nights of sipping and eventually passing out at the bar with froth-covered lips. The gnomes drink some damn good ales and wines, apparently.

Now, a bit of criticism. Two point of view characters make up the bulk of Book I in the GnomeSaga trilogy: Nikselpik and his sister Niksabella Nur. Niksabella is quite believable as a gnomestress (female), with enough subtlety and depth to work quite well as the loner, tinkerer, inventive genius in this story. Even her romantic subplot is very well done, with just the right balance of sweetness and self-doubt. However.

My primary issue with ROUGH MAGICK is that while Niksabella was a vitally important character in this epic, and a very good character at that, she doesn’t exercise much of her own agency. She finds herself in the middle of some serious inter-dimensional drama, and that was great, but she’s constantly on the receiving end of things. Even when handed Chekov’s gun, she doesn’t do much with it. I liked Niksabella, and I really did care about her, but I wish she had done more, in the end, to become the heroine of her own story. Though apparently she gets there in books II and III, which doesn’t surprise me at all. Kenny Soward is more than a solid writer, and Nika is a great character. I’ll add though, that for me, the most brilliant and surprising moment in the novel belongs to Niksabella (it involves a female cleric—you’ll know when you get there).

There’s a rich world for the reader to explore here, Sullenor, rich with all sorts of invention—by Tick and Tock!—a believable legal system and political structure, but I don’t want to spoil much more of the great world-building. The writing flashes some brilliant metaphors and description, while remaining very close to the hearts of Nik and Nika. And let’s not forget, this is an epic fantasy saga about gnomes. It’s kind of amazing that no one, to my knowledge, has done that before. That’s pretty awesome.

There’s also some wonderful action here, mostly in the second half of the novel. ROUGH MAGICK rewards your patience, allowing you to immerse yourself in the Hobbity side of gnomes before plunging the reader into some intense battles and some very cool magic that leads up to an epic showdown.
This is another unique Ragnarok tale, a bit quirky and certainly brilliant in my opinion, a little off the beaten path, but then where else would you expect to find these intriguing little bugger gnomes? In ROUGH MAGICK, you’re not going to find those bright red and blue little creepy bastards smiling in your garden. Kenny Soward’s gnomes are the real deal, and they know how to have a good time and still kick ass real good.

This review was kindly written by Moses Siregar III. You can read more about him on his blog. His second novel, The Ninth Wind, is set to release in April of 2015.