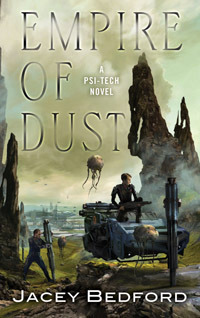 Mega corporations, more powerful than any one planetary government, use their agents to race each other for resources across the galaxy. The agents, or psi-techs, are implanted with telepath technology. The psi-techs are bound to the mega-corps — that is, if they want to retain their sanity.

Cara Carlinni is an impossible thing – a runaway psi-tech. She knows Alphacorp can find its implant-augmented telepaths, anywhere, anytime, mind-to-mind. So even though it’s driving her half-crazy, she’s powered down and has been surviving on tranqs and willpower. So far, so good. It’s been almost a year, and her mind is still her own.

She’s on the run from Ari van Blaiden, a powerful executive, after discovering massive corruption in Alphacorp. Cara barely escapes his forces, yet again, on a backwater planet, and gets out just in time due to the help of straight-laced Ben Benjamin, a psi-tech Navigator for Alphacorp’s biggest company rival.

Cara and Ben struggle to survive a star-spanning manhunt, black-ops raids, and fleets of resource-hungry raiders. Betrayal follows betrayal, and friends become enemies. Suddenly the most important skill is knowing whom to trust.

I’m a huge sucker for science fiction books that toy with the mixing and merging of society and advanced technology. Just how would said technology impact people, morality, society and the like? It’s a fascinating moral gray area that leaves so much for authors to explore. Add in some additional mental abilities – like the ability to talk to animals, to communicate with other people mentally across millions of miles, and you have something that looks quite interesting.

Empire of Dust by Jacey Bedford has all of the elements that potentially line it up to be a science fiction debut that I’d love. While I found it enjoyable in a sort of classic science fiction nostalgic sort of way, I never really crossed into “love” territory, which is unfortunate.

Part of the problem is that Empire of Dust is competing against such genre-bending titles as Ancillary Sword, and Lock In. Science fiction is a really exciting genre right now because so much of it is changing, and it’s exciting to see those changes. They are attracting attention and making people think and question old tropes. I welcome these books and read them with a hunger that is quite surprising.

In the face of those books, Empire of Dust lacks a bit. While it does play with some deep, thought provoking themes, they are a bit more subtle and buried deep under everything else that is happening. On the surface, Empire of Dust lacks much of the unique qualities of its genre companions. A society kind of Amish-esque flee to colonize another planet so they can live how they choose (free of technology). An agreement with the large corporations requires them to take a group of tech (psi-tech) individuals with them to help them start off. Thus, you have a culture clash.

However, the downside of said culture clash is that one of the cultures feels very done before. In fact, it has been done before. People used wagons and oxen in our own history, so their place in a science fiction novel will feel like a throw back to the days where women toiled in the kitchens and men did all the heavy lifting. That’s not really a bad thing and it works well with what Bedford is writing, but it does feel a bit tired in places due to it.

I’m pretty sure that Bedford did that to make the culture clash even more poignant; to highlight the diversity between one side and the other, and it works. She could have done some things differently to accentuate it in a more captivating, memorable way. As it is, there are some points that hit me over the head, and others that could have been elaborated on a lot more.

That culture clash, the struggle for one group of people to live the way they believe while another group just wants to help where they can is actually really thought provoking, and fairly well done. That’s probably the meat of the book, and it left a lot for me to chew on. However, there was quite a bit that could have been accentuated more. There were so many side plots that Bedford never really had time to explore them all to their fullest extent, and thus many felt half formed, packed in, and kind of confusing. Some of the more compelling ideas, like corporations acting as governing bodies, never really got explored as much as they could have been, which is unfortunate, as many of those slightly overlooked side plots were the ones that could have been the most interesting.

The protagonists are very well done, very realistic and their relationships develop believably. I found it quite welcome that romance, and strong ties of kinship and loyalty play a big role in the plot, but they never really go over-the-top. In fact, these relationships were often the most compelling, emotionally charged parts of the novel, and Bedford really excelled with them. The antagonists, however, suffer from some cookie-cutter meanness. They have goals and aims, but it’s all too easy to picture them in dark offices laughing maniacally as they watch their schemes play out. As a result, some sections of the novel are more interesting than others, but they all tie together fairly nicely, even if the overly evil antagonists make the plot feel a bit predictable and clunky in places.

At this point you might be wondering what it was that I liked about this book, and the truth is, I ended up liking a lot more about it than I disliked it. Yes, it might hearken unto the good ol’ days where genders had distinct roles and character roles were played out in fairly predictable ways, but that’s not always a bad thing, and it is absolutely essential to the plot. There is a time and place for novels like this, and the less than perfect elements do not overshadow all of the promise of Jacey Bedford as an author, or how fantastic this series has the potential to be. There is a lot happening under the surface that goes directly against that grain. Women have power, and those you’d lease expect it have impressive strength. The social struggles are absolutely important, and completely powerful, and incredibly relatable.

There is good and bad here. The good is that Jacey Bedford has the potential to be a strong voice in the science fiction community. The bad, and perhaps the most lamentable element, is that she seems to shy away from the daring, compelling, and captivating topics that I hoped she’d boldly toy with. I’m very, very excited to see where this series goes next. The foundation that Bedford has laid has so much potential and promise. This is an author I will watch.