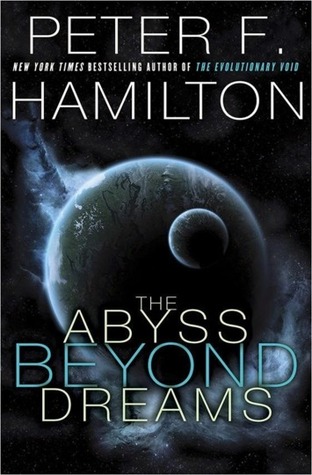 The year is 3326. Nigel Sheldon, one of the founders of the Commonwealth, receives a visit from the Raiel—self-appointed guardians of the Void, the enigmatic construct at the core of the galaxy that threatens the existence of all that lives. The Raiel convince Nigel to participate in a desperate scheme to infiltrate the Void.

Once inside, Nigel discovers that humans are not the only life-forms to have been sucked into the Void, where the laws of physics are subtly different and mental powers indistinguishable from magic are commonplace. The humans trapped there are afflicted by an alien species of biological mimics—the Fallers—that are intelligent but merciless killers.

Yet these same aliens may hold the key to destroying the threat of the Void forever—if Nigel can uncover their secrets. As the Fallers’ relentless attacks continue, and the fragile human society splinters into civil war, Nigel must uncover the secrets of the Fallers—before he is killed by the very people he has come to save.

First things first, I could easily be considered a Peter F. Hamilton fangirl. I have loved every single book of his that I’ve read. One of his series is on my list of series that I never want to end (so I’ve never read the last book). I’m not exactly sure how unbiased I can be in this review, because I went into this book thinking, “Yes! Space opera PFH style! I WILL LOVE THIS THING!” And I pretty much ended up doing just that.

The Abyss Beyond Dreams is far different than anything I expected it to be, and those differences might end up disappointing some readers, but they ended up charming me. Peter F. Hamilton is an author that has many fascets. While many readers will think of him and merge his name with “space opera,” there is so much more to the author than just that, and The Abyss Beyond Dreams shows another aspect of his talent. This book focuses very little on “space opera” and a whole lot on government, the forming and overthrowing of it.

Readers, be aware of that. Most of this book will take place off of space ships, and on a planet that is in many ways not as technologically advanced as our own.

It is not essential to read the previous Void books before you hit The Abyss Beyond Dreams, but I do think it would be incredibly helpful, as some events that previously happened are directly referenced and some of the details might not make much sense (which will directly impact the punch this novel has). However, if you’re one of those people that are good at filling in the gaps as you read, then you might be okay. Maybe.

At this point I’m having a hard time knowing what to say about the book. If you’re familiar with Hamilton, you know what to expect in regards of writing, style, characters and the like. There really isn’t a reason for me to go over all of that in a review. You know. I know. Let’s move on.

The Abyss Beyond Dreams is, like I mentioned above, far different than I expected it to be, and I think those differences will divide readers. However, it really showcases Hamilton’s skill with the details. He has created governments before in his books, but he’s never really created one quite like the one he created here. All of the details that went into it, and the complexities, as well as the struggles the characters/government faces are incredibly well thought out and very, very compelling. It’s obvious that he’s done a ton of research and put a lot of effort into all of it, and you know, that’s what really won me over regarding this book.

Peter F. Hamilton worked hard to make things feel real, and while there are still the larger-than-life elements that are so familiar with the books he writes, they aren’t as prominent as they usually are in his books. This gives readers more time to focus on these details that might be easy to overlook in some of his other books. It’s good that it’s written this way, because it highlights just how versatile Hamilton is as an author. He doesn’t just write space opera, the man absolutely excels at intrigue, and plot twists.

His characters are just as interesting as the world he developed. Some are surprising, and there are the morally degraded ones that you’d expect. No one is strictly “good” or “evil,” which is a Hamilton trademark and one of the things I absolutely love about him. In the politically charged book he’s written, that moral ambiguity is one of the most important elements of the book and he really pulls it of with style. Everyone has their own goals and motivations, and it’s really interesting to see how Hamilton ties them all together, sometimes in incredibly subtle ways, to make the novel and the characters in it shine. There are a few characters who develop exactly as I expect, and a few others who ended up exactly opposite as I expected, which was absolutely delightful.

While there is so much I can say about this novel, I’m having a hard time writing any of it down. There is a lot that won me over, but it was the details, the obvious research, and how the book was exactly opposite of what I expected it to be that charmed me so much. This is the first half of a duology, and it went a long way toward explaining just what the Void was, a mystery that has haunted his books. There are a lot of questions answered that Hamilton has left readers through books and books, and there are a lot more that are asked, but promise to be answered soon.

The Abyss Beyond Dreams will be one of those books that either charms or disappoints readers, but it’s worth taking a look at, especially if you’re a Hamilton fan. He is an incredibly versatile author, and that versatility really shines in this novel. Full of intrigue, twists, turns, surprises and a ton of depth, The Abyss Beyond Dreams is different.

And that’s what makes it so damn good.