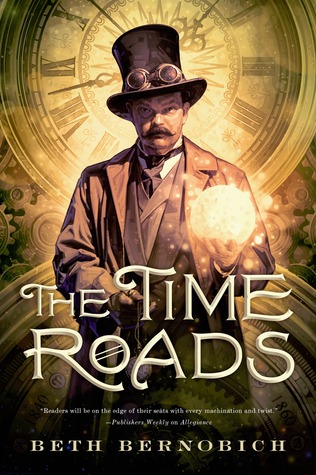 Éire is one of the most powerful empires in the world. The Anglian Dependencies are a dusty backwater filled with resentful colonial subjects, Europe is a disjointed mess, and many look to Éire for stability and peace. In a series of braided stories, Beth Bernobich has created a tale about the brilliant Éireann scientists who have already bent the laws of nature for Man’s benefit. And who now are striving to conquer the nature of time.

The Golden Octopus: Áine Lasairíona Devereaux, the young Queen of Éire, balances Court politics while pursing the Crown’s goals of furthering scientific discovery. When those discoveries lead to the death and madness of those she loves, Áine must choose between her heart and her duty to her kingdom.

A Flight of Numbers Fantastique Strange: Síomón Madóc is desperately trying to discover who is killing the brightest of Éire’s mathematicians. The key to saving lives lies in the future…and Síomón must figure out a way to get there.

Ars Memoriae: Éireann spymaster Aidrean Ó Deághaidh goes to the kingdom of Montenegro to investigate rumors of great unrest. But Ó Deághaidh is tormented by visions of a different timeline and suspects that someone in his own government is playing a double game….

The Time Roads: Éire stands on the brink of the modern age, but old troubles still plague the kingdom. An encounter with a mysterious stranger near death holds the clue to both the past and the future of the nation.

I’m not a big fan of steampunk or time travel. The fact that I read (and enjoyed) a book featuring both of these things, and actually enjoyed it says something really important for readers. The Time Roads is one of those books that I set into not expecting to enjoy, and finished it absolutely shocked that I enjoyed it as much as I did.

That’s not to say that everyone will like this one. I think it will divide crowds pretty evenly. For some it will probably be a bit too confusing, needlessly complex, and uneven while others will probably really enjoy the complexity and the puzzle(s) that the book presents readers.

The truth is, The Time Roads is absolutely unlike anything I’ve read before. There is a bit of alternative history, some delightful steampunk elements, different timelines being worked with, a surprising cast of characters, and a ton going on both in the foreground and the background. It is easy to get overwhelmed and confused with The Time Roads. This isn’t an easy read by any stretch of the imagination, and at times I’m pretty sure things aren’t supposed to make sense.

The Time Roads is a puzzle, and the pieces slowly fall into place as you read. It can be a bit uneven at times, and the ending left me a little underwhelmed, but the journey to get there was absolutely mind boggling. I can see where it could easily frustrate readers, but for those of you who are into puzzles and slow revelations that generally take some effort on the reader’s part, you are in for a treat.

The book itself is composed of a number of different stories that are woven together to form something completely unique. They all touch in some ways, some more evident than others, and it’s quite interesting to see just how they all braid together. I can’t honestly imagine the effort it took Bernobich to write a novel like this. Most of the novel is focused on politics, from the protagonist Aine who is absolutely dedicated to ruling her country in the best possible way from the start. Her introduction and her desire to rule and remain sovereign sets the tone for the rest of the book.

It isn’t all politics, though. Plenty of this book has to do with the thrill of discovery, both on a scientific front and personally and in relationships. There’s plenty of passion, and the gusto that goes into struggling and fighting for something you want and believe in. The Time Roads was full of intense emotions that were incredibly enjoyable and made a huge impact on me. Bernobich somehow managed to make me feel like I was living many of these story threads as I read them.

There is a lot of fodder here for Bernobich to use as fuel for a reader’s fire. There’s plenty of twists and turns to keep you saying, “WTF?” a surprising number of times. The politics aren’t overwhelming, but they do demand attention, and nearly all of the characters that Bernobich introduces are important for one reason or another, which requires keeping track of. And while the politics and relationships can be intense, it’s all nicely balanced out by that thrill of wonder and passion that is a subtle, infectious energy threaded throughout the book.

The Time Roads is not an easy book.

It’s hard to review this novel because there is so much that I really can’t say about it. Some books are all about the journey, and this is one of them. The ending didn’t match the quality of the rest of the book, but the journey to get there was so worth it. There is some real effort required when reading The Time Roads, and that’s also not a bad thing. I appreciate a book that makes me work for it. I also appreciate books that give up their secrets slowly. Bernobich knows how to keep her readers hooked. Political, twisted, complex, detailed, passionate, and ultimately delightful, The Time Roads is a book that is sure to please.