Daughter of the Sword – Steve Bein 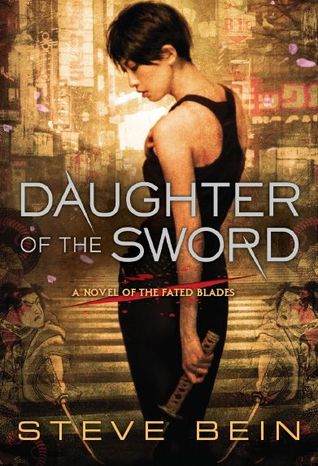 Mariko Oshiro is not your average Tokyo cop. As the only female detective in the city’s most elite police unit, she has to fight for every ounce of respect, especially from her new boss. While she wants to track down a rumored cocaine shipment, he gives her the least promising case possible. But the case—the attempted theft of an old samurai sword—proves more dangerous than anyone on the force could have imagined.

The owner of the sword, Professor Yasuo Yamada, says it was crafted by the legendary Master Inazuma, a sword smith whose blades are rumored to have magical qualities. The man trying to steal it already owns another Inazuma—one whose deadly power eventually comes to control all who wield it. Or so says Yamada, and though he has studied swords and swordsmanship all his life, Mariko isn’t convinced.

But Mariko’s skepticism hardly matters. Her investigation has put her on a collision course with a curse centuries old and as bloodthirsty as ever. She is only the latest in a long line of warriors and soldiers to confront this power, and even the sword she learns to wield could turn against her.

Daughter of the Sword is a book I decided to read for two simple reasons.

1) It’s set in Japan.
2)I’m looking for something a little different.

I know nearly nothing about Japan (except those odd details most people probably know). I know less than nothing about martial arts, and I generally find police procedural heavy books boring.

So, with all of that said, I am floored by how much I absolutely loved this book, and I’m completely astonished that more people haven’t already read it. Daughter of the Sword is one of those rare gems that shines so bright, but really doesn’t get the attention it deserves.

Daughter of the Sword is an interesting blend of urban fantasy and historical fantasy. In fact, the fantasy elements of the novel are pretty subtle, which would easily allow this to be a good crossover series for people who are maybe a little reluctant to try speculative fiction, and enjoy mystery/crime fiction.

In modern day the book follows two main narratives, the most interesting of which is Mariko, who happens to be a modern day detective in Tokyo. She is one of the only female detectives in Japan, and has some very emotional and personal battles against the status quo. Detective work, in her world, is a man’s job. Bein does a great job at weaving into Mariko’s struggle to be a modern day career woman in a world that might not welcome her as such in rich cultural and historical context. This makes her narrative even more powerful than it otherwise would be, because regardless of how much you may or may not know about Japan, the context of her story is something we can all relate to, and empathize with, on some level.

Mariko quickly finds herself involved in an investigation which is just as interesting for all of its layered modern and historical complexity, as it is for all of the interesting people she runs into along the way. Professor Yasuo Yamada shines particularly bright for all that he seems like one of the ancient, incredibly wise, Far East sages that have decorated the pages of many novels. However, Yamada is the bridge that really connects Mariko’s investigation with the past, and thus some of his tropeishness (is that even a word?) can be forgiven.

Daughter of the Sword might seem a little disjointed at first, as readers will be following several story threads. It only becomes obvious as the book gets underway a bit as to how it all fits together. The historical sections are a bit more captivating as they get closer to modern times, but they are all very interesting. Once readers understand how all of the pieces of the story fit together, they will inevitably appreciate all the obvious research and detail that Bein flooded his book with. This is one of those novels that teaches you a lot, not just about the history and culture of Japan, but about some interesting modern day tidbits like their hard work ethic and how it impacts many lives (and health), the mafia, the drug trade, women in the workplace, family and so much more.

Martial arts and swords feature heavily in Daughter of the Sword, as you probably expect from the title. Let me make something perfectly clear to you, dear reader. I know (and understand) less than nothing about either martial arts or swords. Somehow Bein made it not only interesting to read about, but not overpowering, or confusing at all. Sometimes new concepts are hard to grasp in a novel. For example, one kind of boat is pretty much like any other kind of floating craft if I read about it in most books and the jargon is almost always lost on me. However, Bein manages to make his martial arts, the sessions of learning it that you will read about, and the life lessons imparted by these sessions interesting and unique.

Daughter of the Sword is passionate. It’s obvious that Bein loves his subject matter, and it’s even more obvious that he knows what he’s talking about. When you read this novel, you’ll read something written by someone who truly understands what he’s talking about. He’s done his research, and it pays off. Bein takes a culture so many of us just know the pop aspects of, and makes it deep and real and relatable, which is no small feat. Japan is alive, and it’s full of strong, complex people, a rich historical tapestry, and some understated but very powerful and compelling fantasy elements. At its heart, this isn’t a book about swords and history, but about people. Shockingly real, incredibly alive, very captivating people in a country I really want to learn more about now.

This is the first book in a series, and it knocked my socks off. I couldn’t put it down. When I wasn’t read it, I was thinking about it. When I finished it, I was delighted when the second book showed up on my doorstep and I instantly tore into it. Daughter of the Sword is an urban fantasy novel that is absolutely different than any other urban fantasy novel I’ve read before, written with an infectious passion, a soft touch, and an understanding that transcended its pages. This is a series to watch out for.