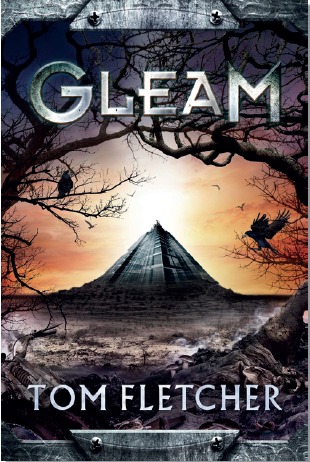 In this Gormenghastian world the Factory is the law – but that does not
mean justice.

The Gargantuan factory of Gleam has seen a millennia of decreasing population. Now the central district is fully inhabited and operational; the outskirts have been left for the wilderness to reclaim. This decaying, lawless zone is the Discard; the home of Wild Alan. He’s convinced that the Gleam authorities were behind the disaster that killed his parents and his ambition is to prove it. But he’ll uncover more secrets than he bargained for.

Man, this book is weird.

Not in a bad way, or a good way. In fact, how the weirdness is reacted to will totally depend on the reader. Some readers will love it, because weird is welcome. Some will think it’s a bit much, because this one really is kind of out there in some respects. Whether or not you like or dislike the weirdness, you really have to tip your hat to Fletcher for having such a vivid imagination, and the guts to not censor it at all.

This weirdness, in my mind, was a good thing. It broke Gleam free from many of the genre boxes and packages that books seem to require. It’s not scifi, it’s not fantasy, it’s not new weird, or dystopian. It just is what it is and that’s fantastic. It stands on its own legs, and blazes its own trail. Gleam is brave and new, uncharted and unfathomable, set in a dark world with dark characters and a dark and twisted plot.

Gleam focuses on a society divided, and one man who happens to find himself in the middle of this divide. His life is uncomfortable, both in and out of the factory. Gleam is a factory that controls the lives of the people who live there, and Alan is that one person that really doesn’t fit in the world he was born into. Gleam is a factory that doesn’t like questions. Things collide and come to a head fairly quickly.

The book gets really interesting when Alan is kicked out and forced to live in the Discard, where all the people struggle and suffer, starve and fight for live. Discard is one of the grimiest, dirtiest, most emotionally raw and one chilling worlds I’ve ever read about. However, despite that, it is incredibly compelling. All the darkness makes it so very real.

At its heart, Gleam really is a book about a man’s quest. He’s thrust into an impossible situation, and picks up a ragtag group of friends and followers along the way. Many of the plot points are fairly typical. In fact, it isn’t the plot that makes this book unique; it’s the world and the settings. It’s the way that Fletcher isn’t afraid to be dirty, improper, and challenge typical genre tropes.

Fletcher has a smooth cadence to his writing. It’s easy to fall into. Gleam might take some getting used to, but Fletcher’s writing really helps you over any humps you might face. Once things get going, they get going really fast. There is, however, a problem with the timeline and its lack of clarity. The book hops forward a few years, and there really isn’t any notice of that. In fact, I’m pretty sure I didn’t pick up the fact that there was a change in the timeline until well after it happened. I had to put the book down, and think about what I’d read so far, because it changed the context of a few of the situations a bit.

The plot might feel a bit disjointed at first, and it does take some time for all the puzzle pieces to fall into place, but when it does the “Ah ha!” moment is absolutely grand. It’s rather interesting to see how all the details that you might not think mattered before actually end up mattering. Fletcher put a lot of thought into writing this book, and while some of the subtleties might be overwhelmed a bit by the weird, that’s not really a bad thing. It’s good to read a book that refuses to be defined. Gleam is refreshing and different, and those two factors right there overwhelm just about anything negative I could say about it.

Gleam is dark, as I’ve mentioned before. However, the aspect of this book that impressed me the most was just how well Fletcher managed to balance dark with light. While Alan seems lost, and he’s thrust into plenty of situations that are sure to make you (and him) uncomfortable, the thing that always powers him is love. Love for his wife. Love for his child. That simple emotion, that empowering purity, is so strong and so vibrant it balances out the darkness perfectly, and has a profound impact on readers.

So, Gleam. It’s weird. It’s challenging. It’s uncomfortable. It’s well written and thought provoking. It’s not what you expect (regardless of what you expect). It has some plot hiccups. The timeline could be clearer and the sometimes it can be a bit overwhelming and unbelievable, but that’s forgivable. Gleam challenges the genre. It pushes boundaries, and introduces readers to profound and amazing characters. It’s dark, but love and hope are subtle tones that balance that darkness.