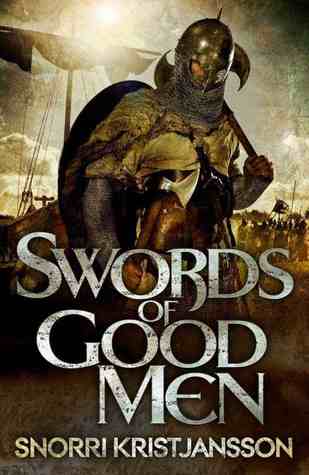 To Ulfar Thormodsson, the Viking town of Stenvik is the penultimate stop on a long journey in this riveting adventure of clashing Viking powers. Tasked with looking after his cousin after disgracing his father, he has traveled the world and now only wants to go home.

Stenvik is different: it contains the beautiful and tragic Lilja, who immediately captures Ulfar’s heart-–but Stenvik is also home to some very deadly men, who could break Ulfar in an instant.

King Olav is marching on Stenvik from the East, determined to bring the White Christ to the masses at the point of his sword, and a host of bloodthirsty raiders led by a mysterious woman are sailing from the north.

But Ulfar is about to learn that his enemies are not all outside the walls.

Swords of Good Men is the first book in Snorri Kristjansson’s Valhalla Saga, an epic fantasy series based on Vikings, and all things Great White North. The magic is subtly woven into religion, and the world feels real and lived in, an important quality in any world. Furthermore, Kristjansson’s humor is woven throughout the book in subtle, yet fantastic ways.

Swords of Good Men is, at its heart, a siege story – a clashing of cultures and beliefs in a world that lots of people like to think they know a lot about, but really don’t know much about. While at its heart the plot is surprising, but fairly expected, it’s the details that really wowed me. (Those damn details. I’m such a sucker for them.)

The naming conventions aren’t so much “conventions” as actual names, which was welcome. In fact, that shows just what shined brightest about the world building. None of it felt made up or forced. In fact, it felt natural and real, from the names to the town, to the people who lived in the town, and the trials they faced. The small town of Stenvik comes to life, and is full of people with their own personalities, goals and desires. Some of them are jerks, some of them are wonderful, and all of them are delightful in their small town setting. While Kristjansson’s writing is strong and flowing, his short, sparse yet powerful descriptions work to highlight how these diverse personalities in a small northern town blazes to life and effect huge changes.

As I mentioned above, the plot is fairly typical – essentially it boils down to a weeklong attack on a town. However, it’s those small details I mentioned above that make it so memorable. Next to that, Kristjansson does some interesting things with perspective – things I thought I’d hate, but ended up enjoying. For example, he can go anywhere from a few paragraphs with one person, to a few pages, and the switches are often kind of random and sometimes unexpected.

That could easily make a book feel disjointed and clunky, but under Kristjansson’s manipulation, it’s those perspective switches that made a book that might have been “yet another book about a battle…” into something that is completely its own. Yes, it has those stereotypical elements, but these perspectives that Kristjansson often flashes onto and away from give the whole siege and conflict some absolutely fascinating depth it would have otherwise lacked. It works wonders at stripping away the “good side” and the “bad side” of the conflict. Cultural nuances (those details I so love) play a much larger role than they otherwise would, and with memorable characters on every imaginable side of the conflict in the book, readers will find sympathy in unexpected places.

Yet, Swords of Good Men have just about everything you’d want in an epic fantasy novel. There is some nobility, some poverty, and everything in between. There are gods, and different cultures, and religions clashing. While it has all of the things you’d expect to find in a novel twice its size, the fact that Kristjansson boils this entire epic saga (which is quite epic) down to the scope of one small village makes a lot of the epic-ness a lot easier to absorb and digest for readers. It’s epic, and grand, and huge, and sprawling, but it’s also boiled down to a manageable level that isn’t overwhelming. The focus cuts out a lot of the pork that can easily be found in other novels of this nature. Everything in Swords of Good Men matters, and it all works toward the goal that kristjansson has in sight.

Perhaps what surprised me most is how juxtaposed this novel is. It’s soft and it’s hard, focusing on the roughest parts of the seedy human underbelly, like abuse and war and bloodshed, to the softest, like love, hope, warm desire, and personal growth. Mixed with the author’s wry humor, the balance between dark and light is just about perfect, and keeps this book from delving too far into almost oppressive grimdark or too far into the overly peppy and optimistic.

Swords of Good Men is an interesting blend of new and comfort fantasy. It’s an obvious setup for more to come, but not in a bad way. In fact, in Swords of Good Men, Kristjansson proves what he’s capable of (which is a lot). There are a lot of techniques he uses that have the ability to easily fail, but somehow Kristjansson makes it all work. In fact, he makes it work so well that he turns Swords of Good Men into an almost unforgettable Viking saga set in a world that is more real, textured and layered than expected, peppered with characters that will make you laugh, and feel strongly.

Swords of Good Men is a solid start to a dynamic series and proves that Kristjansson is a force in the genre to be reckoned with.