The Flight of the Silvers – Daniel Price 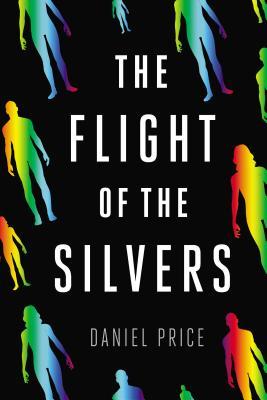 Without warning, the world comes to an end for Hannah and Amanda Given. The sky looms frigid white. The electricity falters. Airplanes everywhere crash to the ground. But the Givens are saved by mysterious strangers, three fearsome and beautiful beings who force a plain silver bracelet onto each sister’s wrist. Within moments, the sky comes down in a crushing sheet of light and everything around them is gone.

Shielded from the devastation by their silver adornments, the Givens suddenly find themselves elsewhere, a strange new Earth where restaurants move through the air like flying saucers and the fabric of time is manipulated by common household appliances.

Soon Hannah and Amanda are joined by four other survivors from their world—a mordant cartoonist, a shy teenage girl, a brilliant young Australian, and a troubled ex-prodigy. Hunted by enemies they never knew they had and afflicted with temporal abilities they never wanted, the sisters and their companions begin a cross-country journey to find the one man who can save them—before time runs out.

I had a love/hate relationship with The Flight of the Silvers. On the one hand, it’s tense and atmospheric with plenty of twists and turns to keep readers occupied. On the other hand, it just didn’t hit the mark for numerous reasons.

I struggle with books like this. I’ll be the first to admit it. If I can’t completely buy into the story, I’m probably not going to enjoy it as much as I should. It’s hard for an author to get me to buy into a tense thriller, especially if it’s set in our own world, or one very like it. If it’s not plausible, or explained well enough, I kind of turn off. Furthermore, even if I buy into it, it needs to be unique enough to keep me interested.

Essentially, The Flight of the Silvers might be a book that you feel like you’ve read (or watched) before. That’s part of the problem. While the plot is insanely enjoyable, and the potential for this to turn into a very powerful, very notable series is there, The Flight of the Silvers reminded me a bit of X-Men and LOST, with some tropey characters that needed a bit more development and some predictable plotlines that were liberally mixed into some thought-provoking elements.

The Flight of the Silvers is a nice mixture of done-before and unique to Daniel Price. In fact, as soon as I would start to sigh and turn off a bit, something would change and I’d get all sorts of excited again. Despite the issues that readers might run into with the things that I mentioned before, once the book gets going the world building gets considerably better, which makes the book more enjoyable.

In fact, that’s symptomatic of the book as a whole. After a really rough start, things start to iron out, and while I might not buy into parts of the book (for example, I think the characters accepted their situations way too easily), Price has a way with shrugging away these unbelievable or unexplainable things away. The better world building and the rather profound themes that the novel is built on become more obvious and engrossing as the novel progresses, which makes it easier to turn a blind eye to all the things that bothered me in the beginning.

In fact, before I knew it, I was finding myself rather absorbed and impressed with vast swaths of the book, and explaining away some of the issues I’ve picked on here. It’s the first book in a series, and it’s a huge one at that. First books in a series, and big first books, tend to suffer from issues. If some of the plot and character elements felt a little tired and lacked the umph that I was looking for, that’s okay. Much of the later plot and development of the world and plot made up for it.

The book is packed full of suspense and surprise. Things aren’t what they seem. In fact, Price spent quite a bit of time making his readers comfortable, introducing them to a book they might think they’ve read before, just to turn the tables and show them that this really isn’t that book at all. Yes, it can be predictable and tropey, but as you keep going, you’ll realize that maybe all of that was a setup for something surprising and more. Or maybe it wasn’t. I’m not sure yet, but I’ll check out the next book to see what happens.

The Flight of the Silvers is a long book, but it goes by pretty fast and is incredibly accessible despite its length. With the cranked up tension and the haunting atmosphere, this is a book that very well might keep you one-more-paging it all night. While I truly did enjoy this novel, I ended up lamenting all of the things that I mentioned above. I was left with an overwhelming feeling that this novel could have been something more, something that wowed me and impressed me in unexpected ways. As it was, I felt like this was a buildup. I am very anxious to see what happens next. The stage is set and this series has the potential to really become something completely unique and grabbing.

It just needs to break free from the ties that bind it.