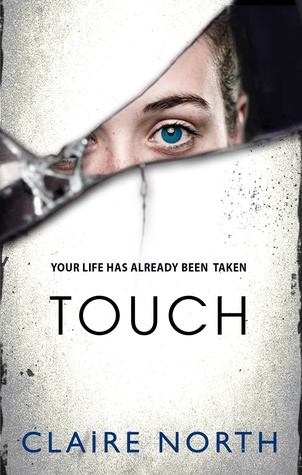 Kepler had never meant to die this way — viciously beaten to death by a stinking vagrant in a dark back alley. But when reaching out to the murderer for salvation in those last dying moments, a sudden switch takes place.

Now Kepler is looking out through the eyes of the killer himself, staring down at a broken and ruined body lying in the dirt of the alley.

Instead of dying, Kepler has gained the ability to roam from one body to another, to jump into another person’s skin and see through their eyes, live their life — be it for a few minutes, a few months or a lifetime.

Kepler means these host bodies no harm — and even comes to cherish them intimately like lovers. But when one host, Josephine Cebula, is brutally assassinated, Kepler embarks on a mission to seek the truth — and avenge Josephine’s death.

Touch by Claire North is riveting.

Really, that’s all you need to know. This book will fascinate you. The plot is interesting, the world and mythology (I guess you can kind of call it “mythology”) is thought provoking. The characters are all so incredibly morally gray that readers like me, those who love those delicious gray areas, will fall in love instantly.

And oh, the nonstop action.

I blew through Touch in about a day because I simply could not put it down. I read it while I was recovering from surgery. If I hadn’t already been off work while I was reading it, I probably would have really, really thought about staying home to read that day.

Touch is based on the idea that ghosts continue living by taking over people’s bodies, flitting from one to the other. This causes some really interesting moral quandaries, not to mention some rather thoughtful sexual dimensions as well. What makes us who we are? In some very real ways these “ghosts” are individual people who transcend their bodies, but they also take on bits of everyone who hosts them. It’s a fascinating puzzle that North presents her readers. These individuals are not only fluid and changing, but dynamic and almost grotesquely driven to survive no matter what.

Our protagonist, Kepler, isn’t really male or female. Kepler’s gender and sexuality varies depending on which body he/she is inhabiting at the time, and while many of Kepler’s personality traits remain the same, there are parts of him that change depending on whose body he/she is inhabiting at the time. Kepler seems like a pretty nice entity – he tends to treat his hosts with courtesy, often offering them money or something else to better their circumstances.

Kepler is an easy person to love. However, it doesn’t take long for North to strip away all those things that makes Kepler look so good to readers. Kepler has done bad things in his/her past, and does some bad things in the present, as well, and he’s not ashamed of any of it. Kepler is incredibly morally gray, and how couldn’t he/she be? Kepler is an entity that survives purely because he is borrowing time, and some lifespan from (sometimes) perfect strangers.

And when you get to read the backstory, and meet some of the other characters that are in Kepler’s same situation, it’s easy to feel both sympathy for their plight, and absolute horror for how they survive and just how they impact lives.

That, right there, is the center of the whole book. On one hand, it’s survival. Grotesque survival, but still survival. On the other hand, it is the greatest form of theft. Who is right and who is wrong? It’s impossible to say. Even after reading the book I’m not sure where I stand on all of the questions that North poses readers. I can say that it is making me think, even after all this time.

Touch is a mystery. It starts out with a murder at a train station, and continues on with a wild high-stakes chase. Through much of the first half of the book, readers won’t really be sure what is going on. Much of that time is spent getting used to Kepler’s life and history, and the tension and strain of the current situation, often flipping between past and present. Until you get used to how the story is told, you might find yourself confused, but it quickly sorts itself out.

Half of the thrill is the plot as it unwinds, and the other half is trying to puzzle out Kepler and those like him, and just how they fit into the world we live in. It’s quite an intricate dance that North has created, an she strikes the balance perfectly. The plot is quick moving, and so full of atmosphere and tension that you’ll be on the edge of your seat. The book might start kind of slow, but it’s no less interesting and absorbing for it. This is a very complex work, and it takes time to build up all the nuances and details. That attention to detail really pays off in the end.

Touch is absolutely phenomenal. It is an intricate, edge-of-your-seat book that is unforgettable. It is thought provoking in ways that I never really expected or anticipated, ad toys with that moral gray area that I love so much. This is one of those books that I’ll want to read again pretty soon to catch all of the nuances that I might have missed before.

Read this book. Read it now.