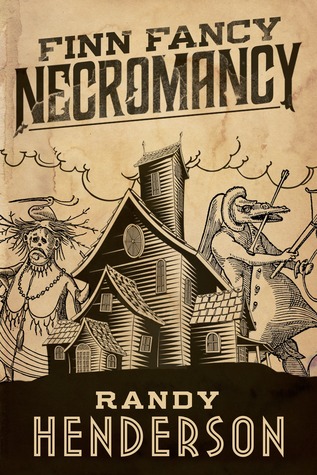 Finn Gramaraye was framed for the crime of dark necromancy at the age of 15, and exiled to the Other Realm for twenty five years.  But now that he’s free, someone—probably the same someone—is trying to get him sent back.  Finn has only a few days to discover who is so desperate to keep him out of the mortal world, and find evidence to prove it to the Arcane Enforcers.  They are going to be very hard to convince, since he’s already been convicted of trying to kill someone with dark magic.

But Finn has his family: His brother Mort who is running the family necrotorium business now, his brother Pete who believes he’s a werewolf, though he is not, and his sister Samantha who is, unfortunately, allergic to magic.  And he’s got Zeke, a fellow exile and former enforcer, who doesn’t really believe in Finn’s innocence but is willing to follow along in hopes of getting his old job back.

I have to admit, I had a hard time taking this book seriously based on the title. I put off reading it for a while. Then, when I was trying to organize my TBR pile, I ran across this one and realized that the book isn’t really supposed to be taken seriously. I mean, it is, but there’s a ton of humor in it, and that humor is reflected in the title.

Finn Fancy Necromancy is a humorous book, which can either be hit or miss depending on your sense of humor and the mood you’re in. If you want to read something epic and full of carnage, this probably isn’t the book you want to read.

Finn is a character that I loved instantly. He was sent into another realm for punishment and has spent the past twenty-five years there. The book starts when his release gets botched and things kind of snowball from there. Finn is determined to figure out who sent him to the Other Realm, and that’s really the crux of the matter, as that person is apparently trying to send him back there again.

Finn left the world in the 80’s, when he was fifteen, and he’s rejoining it during our time. It’s quite funny to see him cope with all the cultural and technological changes that have taken place in the time he’s been gone. Henderson deals with that quite well, and while Finn does adjust, it’s a lot of fun to watch him slip up, get confused, and slowly integrate into his new world.

Finn’s family is quite diverse, and incredibly colorful. They all have their own perspectives and points of view. Some of them you can trust easily, others you can’t, and some are just… weird. It’s fantastic and they add a wonderful juxtaposition to Finn’s voice, and the mystery and strain he’s wrapped up in.

In fact, much of Finn’s adventure, and all the humor and fun of it, is covering up just how tense, confused, and worried Finn really is. It’s easy to forget that, but there are moments when Finn’s voice stops being light and fun, and starts been deep and dark, and reminds readers that his adventure isn’t just an adventure, but he really is wrapped up in something deep, dark, and full of intense atmosphere.

The mystery is well done. I had my guesses as to the guilty party, but Henderson kept me from being certain until he did his ultimate reveal. The journey, however, pleased me more than the ending. Finn Fancy Necromancy is fast moving, exciting, and never really lets up.

Nothing is perfect, and Finn Fancy Necromancy could have used a bit more world building on the fantasy side of things. I would have liked more depth, detail, and information as to the magic system and the culture in that hidden world. Sometimes Henderson gets a little too excited about his terminology, and that can create some speed bumps in the work overall. Some of the humor felt forced, and sometimes it was a bit too much.

This is an easy book to read, and the prose is tight and flowing. The plot never lets up, and the humor is absolutely fantastic. Barring a few minor issues, this book was a lot of fun to read, and that surprised me. I’m not usually a person who is too into humor, but this time it worked. Henderson managed to keep it interesting, and keep me laughing and guessing at the same time.

Finn Fancy Necromancy felt like a homage to humor, a reminder to speculative fiction readers that not everything great needs to be absolutely, incredibly serious. It’s odd, different, weird, off-the-wall, but that’s part of its charm. Is there room for improvement? Yes, but if you’re in the mood for light, fun, quick urban fantasy, then make sure you check this one out.