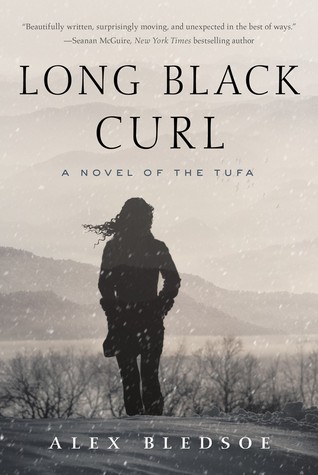 In all the time the Tufa have existed, only two have ever been exiled: Bo-Kate Wisby and her lover, Jefferson Powell. They were cast out, stripped of their ability to make music, and cursed to never be able to find their way back to Needsville. Their crime? A love that crossed the boundary of the two Tufa tribes, resulting in the death of several people.

Somehow, Bo-Kate has found her way back. She intends to take over both tribes, which means eliminating both Rockhouse Hicks and Mandalay Harris. Bo-Kate has a secret weapon: Byron Harley, a rockabilly singer known as the “Hillbilly Hercules” for his immense size and strength, and who has passed the last sixty years trapped in a bubble of faery time. He’s ready to take revenge on any Tufa he finds.

The only one who can stop Bo-Kate is Jefferson Powell. Released from the curse and summoned back to Cloud County, even he isn’t sure what will happen when they finally meet. Will he fall in love with her again? Will he join her in her quest to unite the Tufa under her rule? Or will he have to sacrifice himself to save the people who once banished him?

384 pages (hardcover)
Published on May 26, 2015
Published by Tor
Author’s webpage
Buy the book

It’s no secret that I’m a huge fan of Alex Bledsoe’s Tufa books. While you can really start the series anywhere, I recommend reading it from book one and working your way through. You’ll appreciate the impressive details and characterization more that way, and some of the plot points hinge on things that happened in previous books – though not overtly so.

Long Black Curl is a book I’ve been looking forward to for a while. The third installment in the Tufa series, this one looked to be a bit darker than the previous ones, but so far each book in this series has gone a way I haven’t expected it to go, and this really is no exception.

The characters are a bit different in this one. Bo-Kate is the perfect character to fill her role. Everything she does is a reflection of something that happened to her in her past that she can’t let go of. Bledsoe perfectly crafted her, she’s easy to sympathize with her, but it’s also easy to hate her. That’s the kind of complex characters that I love in my books. Bo-Kate is one of those people you love to hate.

Perhaps the biggest shock was what happened to Rockhouse Hicks, and that is also one of the characters that shows the Bledsoe’s incredible skills the strongest. Rockhouse is a character that is hard to feel anything but complete loathing for, but somehow in this book, Bledsoe managed to make him somewhat sympathetic. I actually managed to catch myself feeling bad for this horrible man and the hand fate has dealt him. It really takes an incredible author to be able to make a reader feel bad for someone who is absolutely appalling.

Long Black Curl is full of history, and a lot of it hinges on the emotional impact of events that transpired in that history. The Tufa aren’t a race that is prone to forget, and those long lasting ripples are what the entire plot of the book hinges on. While history and lore has featured in previous Tufa books, but I don’t think it’s been such a strong plot point in the novels until now, and it was very artistically done, but also thought provoking. It’s interesting to see how the past can impact the present, and Bo-Kate is a grim reminder to these people with long memories of just how history can directly impact the present.

There are a lot of twists and turns, and the ending really surprised me, and was quite powerful. The writing is lyrical, and as always, the musical aspect of the novel was one of my favorites. The world building is delightful. Bledsoe manages to add more to his world in each book. In fact, at this point the world of the Tufa, at times, feels more real than the world I live in.

Previous characters show up in Long Black Curl, as you’d expect because the community is small and tight knit, but they don’t take over the novel. There are more new characters than old, and while the old characters give readers a sense of foundation and serve to remind of what’s happened before (it’s also fun to see what’s going on with them now), they generally come, do their thing, and then leave. The community, as the world, gets larger and larger, and gains more color and detail as they go.

This was probably my favorite Tufa book so far. It’s intricately plotted with plenty of twists and turns. The world gets larger and larger, despite the fact that it never really leaves the area that readers are already familiar with. There’s music, love, hope, and plenty of pain. The emotions are real and raw, and the ending will leave you gasping. This series is always one that I look forward to reading. Bledsoe is an incredible author, and his skills are really showcased in Long Black Curl.

I never know if I should call this series urban fantasy, or magical realism. Whatever it is, it’s done absolutely right.