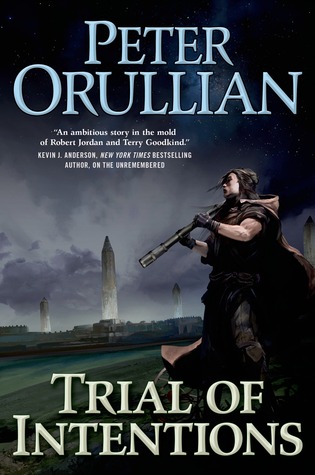 The gods who created this world have abandoned it. In their mercy, however, they chained the rogue god—and the monstrous creatures he created to plague mortalkind—in the vast and inhospitable wasteland of the Bourne. The magical Veil that contains them has protected humankind for millennia and the monsters are little more than tales told to frighten children. But the Veil has become weak and creatures of Nightmare have come through. To fight them, the races of men must form a great alliance to try and stop the creatures.

But there is dissent. One king won’t answer the call, his pride blinding him even to the poison in his own court. Another would see Convocation fail for his own political advantage. And still others believe Convocation is not enough. Some turn to the talents of the Sheason, who can shape the very essence of the world to their will. But their order is divided, on the brink of collapse.

Tahn Junell remembers friends who despaired in a place left barren by war. One of the few who have actually faced the unspeakable horde in battle, Tahn sees something else at work and wonders about the nature of the creatures on the other side of the Veil. He chooses to go to a place of his youth, a place of science, daring to think he can find a way to prevent slaughter, prevent war.

720 pages (hardcover)
Published on May 26, 2015
Published by Tor
Author’s webpage
Buy the book

I had a conversation with Peter Orullian a while ago where I told him that I tend to enjoy epic fantasy series that start out reminiscent of something I’ve already read, but then take a left turn into the unexpected. There’s something really fun about reading a series that reminds me of all the reasons I fell in love with epic fantasy, and then boldly takes me into brand new, unexpected territory.

Trial of Intentions is that left turn that I look for in my epic fantasy.

Trial of Intentions is quite large and it will take you time to read. While, in some ways, The Unremembered might have seemed kind of stereotypical to the genre, Trial of Intentions is something else. All of the main characters from The Unremembered are doing their own things, and they all have their own motivations for the various things that they are doing. Orullian does a fantastic job at highlighting those motivations, and just how past actions and events mentally impact the characters in their current form.

If anything, the character voices are better, far more unique and memorable in Trial of Intentions, and a lot of that I attribute to those personal motivations that I mentioned above. The drive for each character to better themselves, and the world around them, in some way is quite strong, and incredibly poignant and it fills the book with powerful intention.

In truth, that’s the backbone of the entire novel – the intention, and it’s marvelous that Orullian managed to create characters so full of drive, vim and vigor that they made the title of the novel absolutely understandable (I tend to wonder about book titles more often than I like to admit). The ‘trial’ part is also obvious. People change, sometimes in surprising ways, and that tends to shape the flow of events that take place. The entire book is a trial, one hell of an emotional, personal, and interpersonal trial.

Many of the actions that characters undertake are rather unexpected and out of line with what you’ll find in most epic fantasy. For example, one character spends much of the novel trying to avoid war rather than fight it, and he does copious amounts of research, discussion, and discourse to help prevent said war. There is plenty of action and plenty of blood, but the fact that a protagonist tries so hard to avoid bloodshed is quite remarkable in a genre where blood, gore, and war are often celebrated in novels rather than discouraged.

Trial of Intentions, in many ways, plays an amazing sleight of hand game for readers, and it takes almost no time for Orullian to show that he’s not writing your cookie-cutter epic fantasy. The great evil exists, but it’s not where you expect it to be. Character motivations seem obvious on the surface, but as the book progresses things gain more depth and motivations change. The learning and education that characters go through changes just about everything. Nothing is what it seems to be, and the thing you’re looking for isn’t where you expect it to be. The “good” is veiled and the “evil” is… different. Orullian does a wonderful job at packing this book full of emotional surprises that will hook readers.

The world and the magic system expands in leaps and bounds, and rather than filling the book full of infodumps, Orullian packs a ton of information in dialogue, and plot movement so its easy to absorb, and fairly easy to understand. It should be noted that some of the musical concepts might go over some readers heads if they don’t have any experience with music – like half tones. I struggle with math and engineering, so some of those details flew over my head (though, honestly, I’m completely used to that). This isn’t a magic system you can understand easily, and that’s part of the beauty of it. It’s a constantly evolving thing and readers can learn about it, and understand it, along with the protagonists. I should also note that I truly enjoyed the fact that magic was just as important, and just as highlighted, as science, math, music and philosophy.

Trial of Intentions is a book of choices, and an interesting exploration of just where those choices take people. Nothing is what it seems to be, and no one ends up being who you expect they are. Choices are hard, and emotional, and the trial is explored throughout the novel. This book shows a true evolution of plot, and character, and Orullian does it masterfully. The tone is a bit darker, the struggle is raw and real, and the emotions are absolutely memorable. Orullian really shows his strength as a writer with Trial of Intentions. He took an epic tale, and turned it on its head in one of the most raw, real, and fantastic reading experiences I’ve recently had.